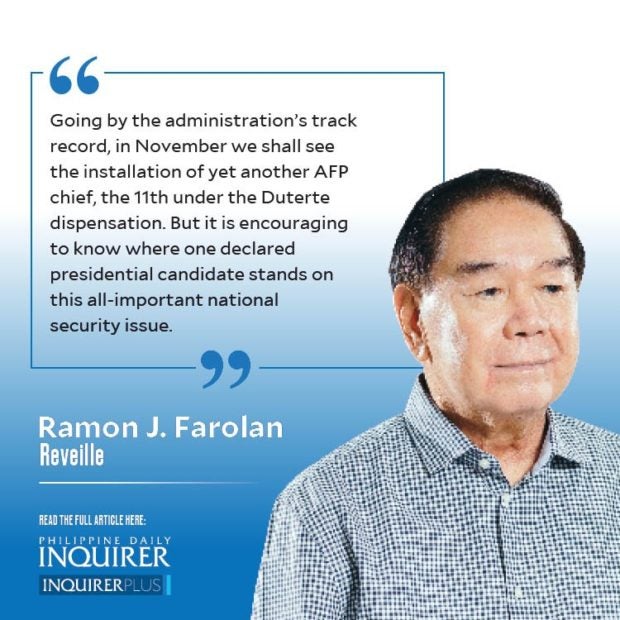 Last year, Sen. Richard Gordon filed Senate Bill No. 1785 aimed at strengthening professionalism and the continuity of policies and modernization initiatives of the Armed Forces of the Philippines. Similar measures were also crafted by Senators Aquilino Pimentel III and Manny Pacquiao. They were all aimed at bringing to an end the dangerous practice of a “revolving door” leadership in the AFP that has allowed political patronage, accommodation, and promotion favoring certain personalities over the security and defense of our nation. Recently Sen. Panfilo “Ping” Lacson, chair of the Senate national defense and security committee, brought to the Senate floor SB No. 2376 that consolidated different but related bills filed on the same subject matter.

In his sponsorship speech, Lacson declared “the clamor for this measure has echoed from the grounds of Camp Aguinaldo to the Halls of the Senate repeatedly over the years. Generations after generations of military men have clamored for this piece of legislation, most of them long-retired from the service without the measure seeing the light of day.” He said that in the last three-and-a-half decades, we have had 37 senior officers appointed to the position of AFP chief of staff. Comparing our situation with other countries in the region, he revealed that “the average term of duty of the AFP chiefs of staff is distinctly short, averaging not more than seven months each for the last five AFP chiefs. The last five chiefs of Singapore’s defense force each served for three years on average; Malaysia’s chiefs of armed forces served for two years and 212 days, and Indonesia’s commanders of national armed forces served for two years and 132 days.

“Time and again, we see leaders of our armed forces come and go through the ‘revolving door policy,’ staying in office just to warm up their seats and not long enough to implement their legacy programs. This state of things has always been a disservice to the mandate of the military leadership entrusted with the security and defense of the country.

“Short-term leadership of ‘quickie generals,’ so to speak, often undermines the integrity and competence of the position of chief of staff. It erodes short- and long-term strategic planning and development, leaving behind reforms to take root and effect meaningful change in the military.”

SB No. 2376 basically seeks to change the compulsory retirement age of 56 to 59 years old, or the accumulation of 30 years of satisfactory active duty, or the maximum tenure in grade, whichever comes earlier. Officers and enlisted men shall be retired in the permanent grade they last held. The fixed tour of duty of three years shall be accorded to the chief of staff, vice chief of staff, deputy chief of staff, major service commanders, commanders of unified commands, and the inspector general. These key positions deserve a sense of stability and continuity that the “revolving door” practice does not engender. Officers and enlisted men who fail to go up the ladder on account of their own fault, failure or negligence, or lack of individual merit will be subjected to forced attrition. Lacson also indicated that the AFP had too many generals with few soldiers to command. The proposed bill provides for a more ideal general-to-total force ratio of 1:1,000. Another feature of the proposed bill prohibits the appointment as secretary of national defense of a retired or resigned military officer within one year from the date of his retirement or resignation. For comparison, in the United States, the prohibition period covers seven years from retirement or resignation.

Given the present circumstances, with election fever starting to grip the nation, it is likely that the proposed legislation may not be acted upon by Congress. And going by the administration’s track record, in November we shall see the installation of yet another AFP chief, the 11th under the Duterte dispensation. But it is encouraging to know where one declared presidential candidate stands on this all-important national security issue. A presidency under Lacson would spell the end of the AFP “revolving door.” This and a host of other major issues need decisive resolution and action if we are to move forward. All require competence and integrity in the leadership of the nation.