Let’s invest in the right kind of leadership 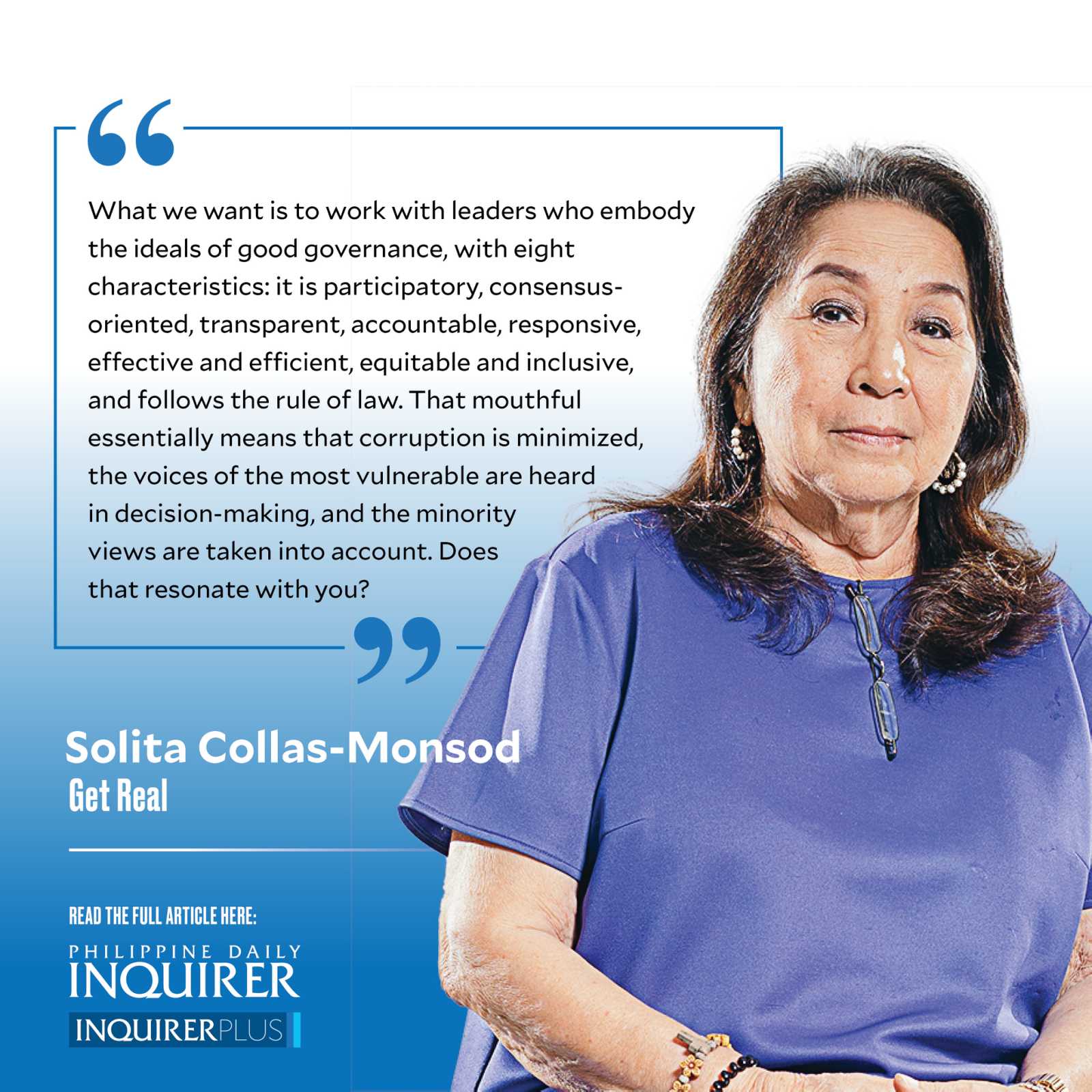 This is a message for all those who are unhappy with the way our country is being governed but believe that there is hope for the Philippines. And also believe that YOU have the power to work for change. (This is a follow-up to my Sept. 11 column).

Next year’s elections will give us a chance to change our country, but we must translate our hope and faith into action, and make sure our voices are heard.

What we want is to work with leaders who embody the ideals of good governance, with eight characteristics: it is participatory, consensus-oriented, transparent, accountable, responsive, effective and efficient, equitable and inclusive, and follows the rule of law.

That mouthful essentially means that corruption is minimized, the voices of the most vulnerable are heard in decision-making, and the minority views are taken into account. Does that resonate with you? Do we want those leaders? We not only want them, we need them. So we have to ensure that they are elected.

How do we do that? You know that candidates need money. So the dynasties, which have already created their own nest eggs and election funds, have the advantage. Then there are those who have sold themselves to big business tycoons who will, of course, exact their quid pro quo at some point. They, too, have the advantage. So we need to even up the odds. And that’s where crowdfunding, or its more sophisticated version, the “Power of Nine,” comes in.

I already explained what the Power of Nine is (Sept. 11 column). Crowdfunding is when a large number of people each give an amount of money to pay for a project, which in our case, is to help get the candidates of our choice elected. In business, it is the use of small amounts of capital from a large number of individuals to finance a business venture. In our case, this would be to finance the kind of politicians who have the good of the country in mind, rather than the good of their families/businesses/patrons. We are investing in the right kind of leadership.

Not to be repetitive, but we will have elected leaders who have no obligation to their dynastic relations, or to big business contributors, but whose “utang na loob” will be to the people whose contributions helped them get elected, with no strings attached.

Imagine, Reader, if we can pull this off. It would be essentially a spit in the eye of the dynasties and of the tycoons who think they can own the country (and who have actually done so).

What crowds will we draw our funding from? Let’s do some back of the envelop calculations. Population: 111,336,794 (as of Sept. 16, 2021). Divided by 4.2 (average family size, National Health and Demographic Survey), that makes 26.5 million families. Assume the bottom quintile, or 5.3 million families, are poor, but are motivated enough to donate P5 over the next eight months, that would amount to P26.5 million right there. For the second quintile, let us assume donations of P10 per. That’s another P53 million.

For the third quintile, let us say that the average donation would be P100 per (remember this is over a period of eight months). Now we’re talking about P530 million. Add to that the fourth income quintile with donations of P1,000 per, and we will have raised P5.3 billion. For the fifth quintile or maybe just the 5 million of them (the rest have their own objectives), let’s say we can get P2,000 from each. That’s another P10 billion pesos.

Add them up, folks. The potential of around P16 billion can be raised from people of goodwill, from all walks of life. A dream? Maybe. But we must take the first step.

And in the process, we will be changing the way politics is conducted in this country. Instead of people being bought during elections, people will be giving money to the good politicians (and the return on investment will be very highʍI’ll write about that later). And we will be getting a crop of politicians who are thinking less of themselves than of their countrymen.

And remember, I told you that I would ask the group AWARE if they could be in charge of this project? They said yes, good women that they are. That’s a start. And, initially, the money raised will go to women leaders who are qualified, competent, with no dynastic baggage and no whiff of corruption. The project is called LetWomenLead.

For starters, a bank account has been opened that will accept your deposits: BPI 0290-0110-73, under the names Cecilia Lazaro and Solita Collas-Monsod. That’s Cheche and Winnie. Onward!

Only 4,393 new COVID cases logged due to low number of tests

Why the Marcos brand remains popular