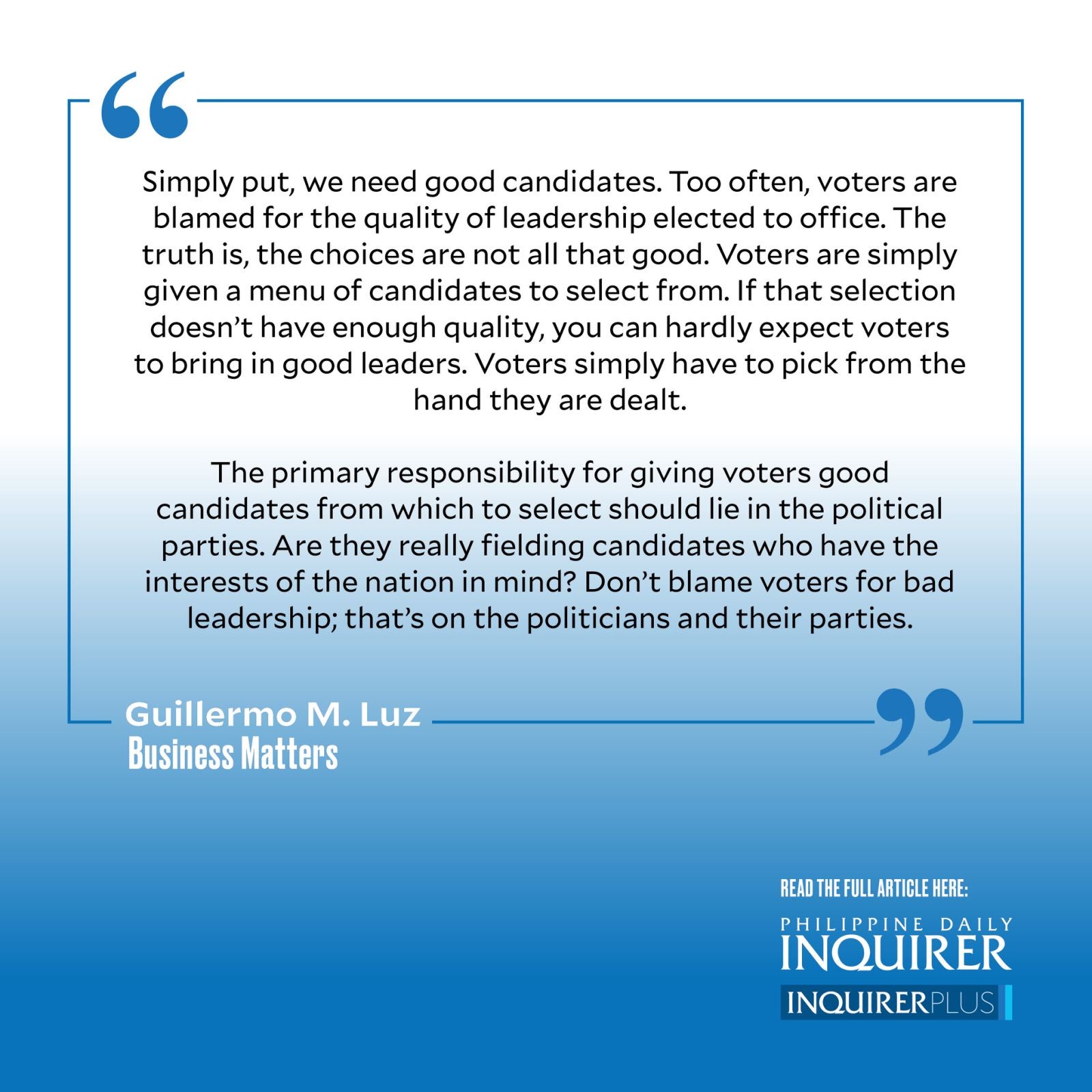 Elections are just around the corner, and it’s feeling strangely familiar to one we went through 35 years ago. Corruption, scandal, a wounded economy; the only difference is a pandemic. It’s time to put some more serious thinking and effort to prepare for this important event.

First things first: voter registration. If you are eligible to vote (e.g., 18 years old on or before election day) but haven’t registered yet, you have very little time left to do that. The one act we can do to bring leaders to run our government is to elect them to office. You aren’t only voting for a president and vice president. You also get the chance to vote for 12 senators, your congressman, a party list representative, governor, vice governor, provincial board, mayor, vice mayor, and city or municipal council. That’s a top-to-bottom opportunity to vote people into office.

But you can’t do that if you haven’t registered to vote. Please register to vote or reactivate your registration if you feel you may have been delisted. Those who haven’t voted in the last two consecutive elections can be delisted. Instructions for voter registration can be found on the Comelec website (www.comelec.gov.ph).

The voter registration period ends on Sept. 30. Given a continuous lockdown for the last 18 months, it makes sense to extend the registration period by one month. Another alternative would be to focus on online registration and allow the biometric scanning to take place after the deadline since those fingerprints are not needed immediately.

The next important factor are the candidates. Simply put, we need good candidates. Too often, voters are blamed for the quality of leadership elected to office. The truth is, the choices are not all that good. Voters are simply given a menu of candidates to select from. If that selection doesn’t have enough quality, you can hardly expect voters to bring in good leaders. Voters simply have to pick from the hand they are dealt.

The primary responsibility for giving voters good candidates from which to select should lie in the political parties. Are they really fielding candidates who have the interests of the nation in mind? Don’t blame voters for bad leadership; that’s on the politicians and their parties.

The third important factor is transparency.

Though our election counting is automated through vote counting machines and made faster by information technology, they are less transparent than in the past. Counting is no longer witnessed at the precinct level, so communities don’t know who won locally. Votes are just processed but no one can quite say how. In the 2019 elections, a so-called “computer glitch” prevented results from being reported publicly for roughly seven hours. In fact, the servers kept processing data over those seven hours. The count never stopped, only the reporting. And when reports were finally released, the results were pretty well final.

For 2022, Namfrel has proposed that QR codes be printed on election returns printed in each precinct (e.g., by each vote counting machine) and posted in voting centers so people can scan them using their phones and find out how their communities voted. That will bring back some transparency into the process without slowing down the count, since canvassing reports can still be transmitted electronically.

Less than eight months to E-Day and there’s plenty of work that needs to get done. Time to get started.

Read Next
PH territory incompatible with neutrality
EDITORS' PICK
Gear up and get ready to play with Yamaha Mio Gear
Acer starts the year off strong with the Aspire Vero National Geographic Edition
Over 3 Million worth of prizes to be won at Smart Padala’s SENDali Manalo Promo!
Uproar over no vax, no ride policy: Maybe it’s time for gov’t to say sorry—Bello
97% of COVID-19 beds at PGH currently occupied
Japan brings back virus restrictions over Omicron surge
MOST READ
1Sambayan names 7 aspirants in its 2022 Senate lineup
Emma Stone calls Andrew Garfield a ‘jerk’ after he ‘lied’ about his ‘Spider-Man: No Way Home’ appearance
Guevarra to Acosta: Obey rules on unvaccinated
PH to import 60,000 tons of fish to cover shortage
Don't miss out on the latest news and information.