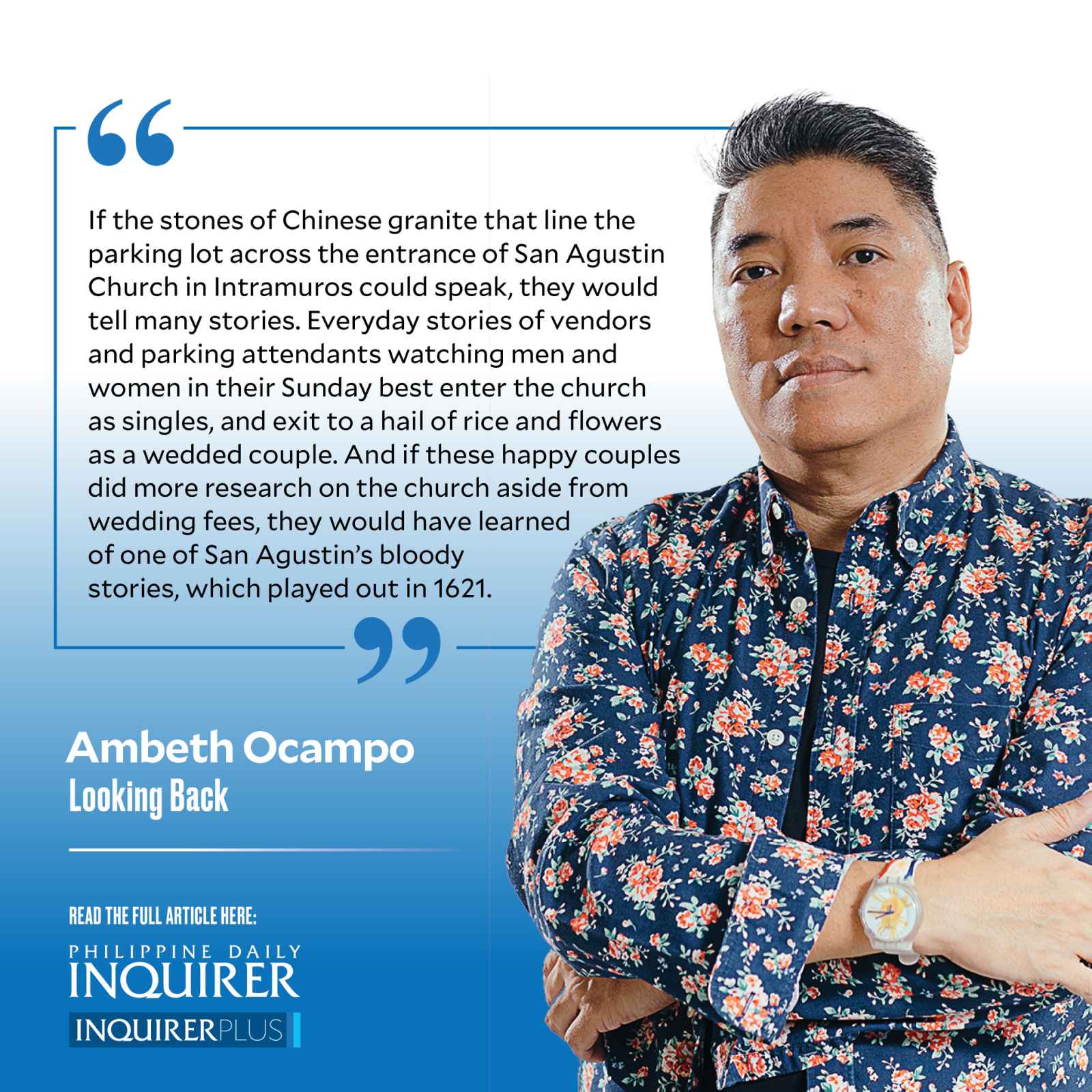 If the stones of Chinese granite that line the parking lot across the entrance of San Agustin Church in Intramuros could speak, they would tell many stories. Everyday stories of vendors and parking attendants watching men and women in their Sunday best enter the church as singles, and exit to a hail of rice and flowers as a wedded couple. And if these happy couples did more research on the church aside from wedding fees, they would have learned of one of San Agustin’s bloody stories, which played out in 1621.

The cast of characters included the Spanish governor-general, Excmo. Sr. Don Alonso Fajardo de Tenza, his wife Catalina Zambrano, and a certain Juan de Messa Suero. To flesh them out a bit: Fajardo was a controversial figure whose reforms were being resisted by the Royal Audiencia. Fajardo had unconventional ideas, like colonizing Formosa (now Taiwan) or setting up a fund for the Japanese to attend seminaries in Manila and be ordained into the priesthood. Alonso’s wife, Catalina, was a bored housewife who fell for De Messa, a handsome ex-Jesuit who had clocked in seven years of religious life in Coimbra and three marriages before he turned 30. Add to this mix tropical heat and the torrid heat of an extramarital affair that began on Holy Thursday 1621, of all days, and you have a recipe for disaster.

The historical basis for the story is narrated in a dozen pages in Volume 20 of the 55-volume compilation of documents, “The Philippine Islands,” known to historians as “Blair and Robertson.” To this basic story, many embellishments were added over time.

Then as now, nothing remains hidden in Manila for long. Gossip about the affair soon reached Fajardo, who set a trap. On May 12, 1621, Fajardo left the governor’s palace in Intramuros and set out for Cavite to check on reports regarding a Dutch threat to the Philippines. Halfway to Cavite, the governor separated from his entourage and returned to Manila alone. He arrived at the palace to find his wife out and questioned her page with a knife to his breast. Naturally, the boy spilled the beans: He knew of the affair, delivered messages, and said Catalina usually left the palace for a tryst disguised as a man.

Fajardo proceeded to the alleged lover’s house and there saw Catalina, Juan de Messa, and De Messa’s friend entering the door. After posting guards on the four streets surrounding the house and ordering that no one was to come in or out, Fajardo ran to the house just as the unnamed man was closing the door. Fajardo pushed the door open and stabbed the man in the breast. Hearing the commotion, De Messa and Catalina ran upstairs, while the wounded man ran outside to be finished off by Fajardo’s guards.

Fajardo followed the lovers and, entering a dark room illuminated by two candles on a buffet table, thrust at De Messa hard—so hard that the hand on his sword bled. Fajardo shouted, “Ha, traitor! You have wounded me!” When De Messa was still able to run out, Fajardo suspected he was wearing armor so he aimed for the neck and caused him to fall down the stairs, where he was done in by the Fajardo’s guards. One account said De Messa’s last words were not of repentance, apology, or the holy names of Jesus, Mary, and Joseph (that’s the origin of “susmariosep!”). Rather, he said: ”Whoever you are, don’t kill me. Consider the honor of your lady.”

After all this, Fajardo found his wife hiding in the attic and stabbed her thrice. He stopped when she requested confession before death. This being a reasonable request, he left her with three guards and went out to get a priest from the nearby Franciscan church. Fajardo returned with a secular priest he had met on the way. Catalina stalled for time, taking half an hour to finish her confession. When it was done, Fajardo killed her with three or four more sword thrusts.

All three corpses were dumped on the patio of San Agustin and left overnight for the public to see. Catalina’s corpse was removed in the morning, but those of the men were left longer to be gawked at by “uziseros.” Since Fajardo himself supervised the investigation, he got off the hook.

Gordon: ‘How dare you ask for Filipinos’ vote when you failed them?’