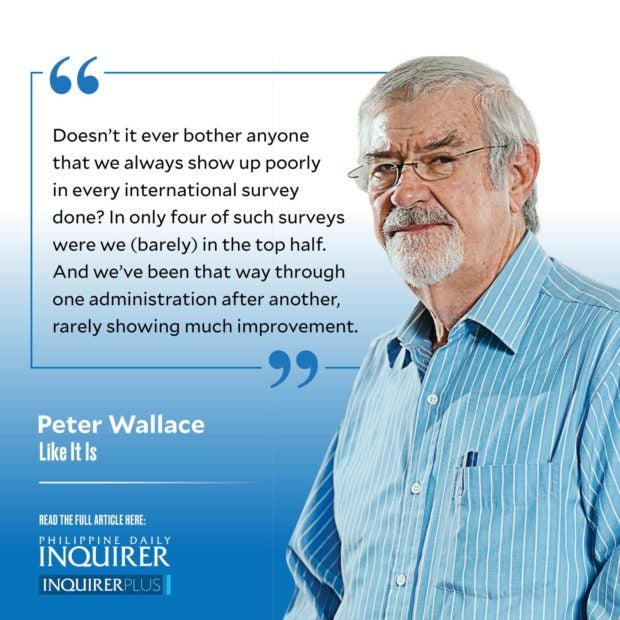 Doesn’t it ever bother anyone that we always show up poorly in every international survey done? In only four of such surveys were we (barely) in the top half. And we’ve been that way through one administration after another, rarely showing much improvement.

The latest is the assessment of COVID-19 risk level released by the health ministry of Qatar. Only six countries are listed in the Special Risk country zone: the Philippines along with Bangladesh, India, Nepal, Pakistan, and Sri Lanka. There are 167 Red Risk countries, 27 in the Yellow List, and 11 in the Green List, where our neighbors Australia and New Zealand lie. Why aren’t we up there at least in the red risk group?

Related to that, Bloomberg listed us among the bottom of 53 countries in its COVID-19 Resilience Ranking, which measures “where the virus is being handled most effectively with the least social and economic disruption.” Reinforcing that view, the Lowy Institute in Australia ranked the Philippines 81st of 102 countries in terms of performance in the fight against COVID-19.

The one that really bothers me, which my good friend Ciel Habito pointed out on Tuesday, is that the Philippines is the third most restrictive economy to foreign direct investments based on the OECD FDI Regulatory Restrictiveness Index. This one should also bother Congress. Here’s a solid reason to change the Constitution. Related to that, out of 63 countries, the Philippines is 48th in the 2020 World Talent Ranking, which evaluates countries in terms of how they develop and attract a workforce, and 57th in the 2020 World Digital Competitiveness Ranking, which assesses the capacity and readiness of countries to adopt and use digital technologies. The 2021 World Competitiveness Ranking of the IMD World Competitiveness Center, meanwhile, lists us at 52nd out of 64 economies.

Just this year, we ranked last out of 134 countries in the 2021 World’s Safest Countries survey of Global Finance Magazine, which looked at factors such as war and peace, personal security, and natural disaster risk, including experience and risk from the pandemic. Due to lack of available data, the worst countries like Syria, Afghanistan, and Myanmar weren’t listed. According to Reporters Without Borders, we are also 138th out of 180 countries in the World Press Freedom Index. Rappler and ABS-CBN would agree with that.

The Philippines ranked 115th out of 180 countries in the Corruption Perception Index of 2020, indicating that corruption is still rampant in the country. The President’s efforts to eradicate it have not, it seems, succeeded.

We ranked 91st out of 128 countries in the 2020 Rule of Law Index of the World Justice Project, which measures the state of rule of law in countries based on the perception and experience of the public as well as legal practitioners and experts.

Manila is the fourth most traffic-congested city in the world behind Moscow, Mumbai, and Bogotá, according to the 2020 TomTom Traffic Index, which studied more than 400 cities across 57 countries worldwide. The redesign of Edsa, initiated by Eddie Yap, might help here.

Then there’s the most horrific of all: the state of our children. In 2018, we were dead last among 79 countries in reading comprehension, and second last in math and science, according to the Programme for International Student Assessment. In a separate study in 2019, Filipino students ranked last out of 58 nations in math and science based on the Trends in International Mathematics and Science Study. What a sad future for the Philippines these findings imply.

The three where we scraped in above 50 percent were the Doing Business Report 2020 of the World Bank, where we ranked 95th out of 190 countries (here at least something is being done thanks to the efforts of Secretary Ramon Lopez, who has brought us up from 124th in 2019, and all indications are we’ll rank higher in the next survey); the Global Competitiveness Report 2019 of the World Economic Forum, which ranked us 64th out of 141 countries; and the 2020 Global Innovation Index of the Cornell University, INSEAD, and the World Intellectual Property Organization, where the Philippines was at 50th out of 131 countries.

Isn’t it time for those who truly care for our country to start an open, frank dialogue on why we always do so poorly, so it can be fixed? It’s not about a particular leadership, as the long history of being at the bottom tells us. It’s something else. It’s time for some soul-searching.