The impact of pandemic corruption 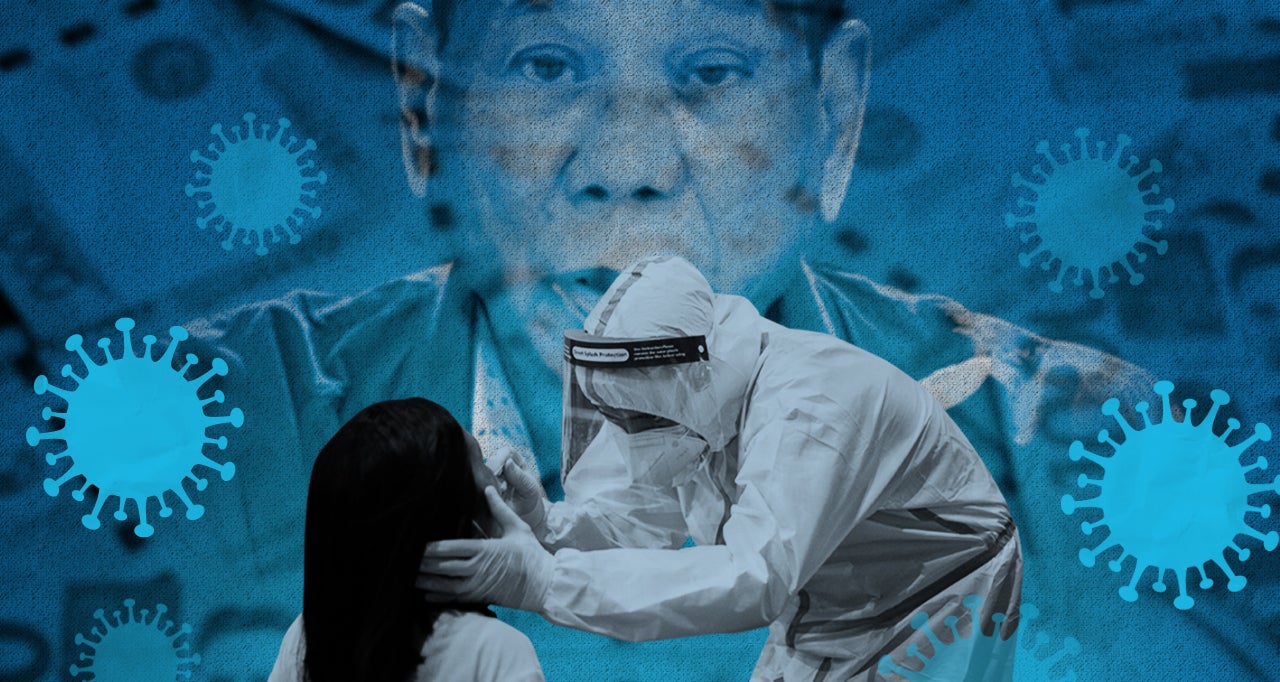 The money numbers emerging from the COVID-19 pandemic are mind-boggling. Philippine total debt, largely for pandemic response, was projected to hit P13.42 trillion in 2022, the year President Rodrigo Duterte steps down from office.

To have a picture of how enormous that amount is, let’s pick 1 trillion and think about counting from one to that sum. 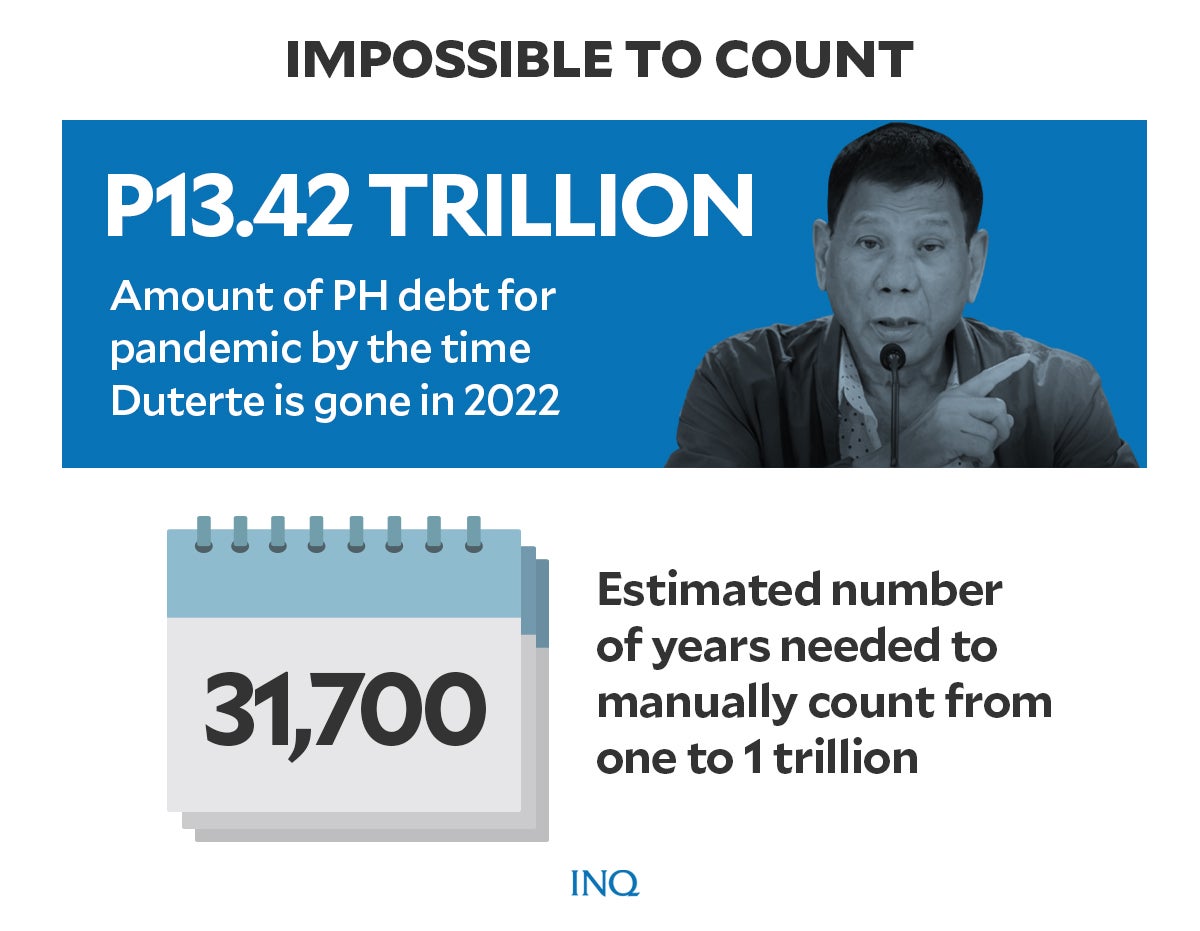 While it’s no longer necessary to manually count numbers in an era of supercomputers, just imagining the task could show just how mind-numbing those infinitesimal numbers are.

As trillions of pesos pour into government operations, mainly to defeat a pandemic that is bleeding nations everywhere, a few billions lost in leakages or outright theft of funds could appear to be just a microscopic germ.

But one billion is a figure far from being minute.

To count from one to one billion, it’s estimated you would need 30 to 100 years to finish, depending on how quick you do the counting. While not impossible, to count to one billion would require an amount of time longer than that which government thieves would spend in jail for misspending or pocketing outright public funds—if they are found, tried, and convicted at all.

In the current scandal involving the use of funds by the Duterte administration for pandemic response, several sets of numbers have emerged that would be both impossible and easy to count.

Let’s start with money spent already. At least P67 billion in health funds were found by state auditors to have deficiencies in use, or simply that some amounts had not been used properly. Between P3 and P8 billion was spent on PPE, testing kits, and other items with a markup of 100 percent more than market prices. 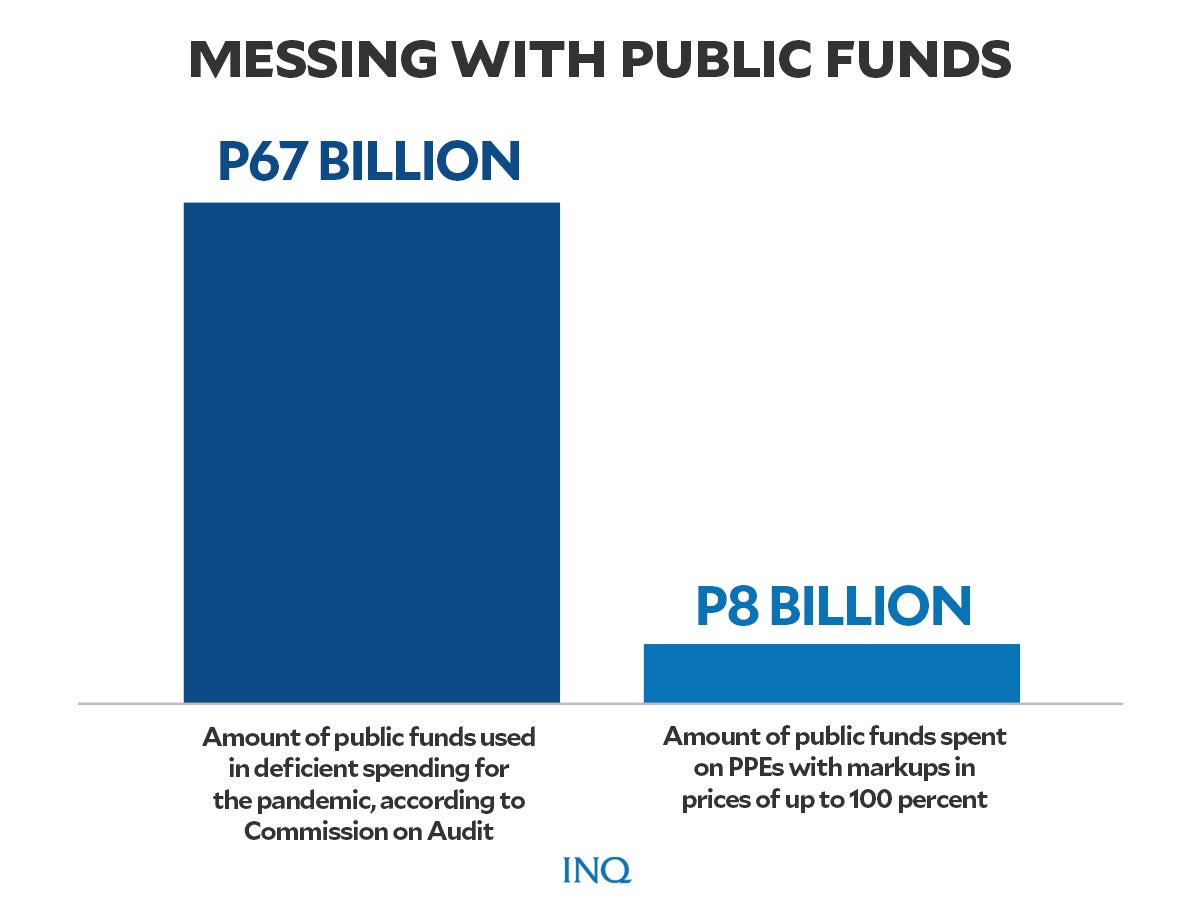 Another set of numbers that has emerged involved the speed with which billions of pesos changed hands—30, the days it took the health department to transfer P42 billion to a division in the budget department to purchase PPE sets at prices up to 100 percent higher than normal.

It would be difficult not to conclude that the suffering of people barely breathing or crawling on all fours to feed selves and families has become the cover for a group of thieves in government to ransack the treasury vault.

That corruption, or the whiff of it, has continued into the pandemic says so much about many things.

One is about tough talk against corruption. Unmatched with action, it is but empty bravado that sounds exactly the same as the braggadocio about asserting Philippine sovereignty aboard a jet ski, which would later be clarified as a joke that only fools would take seriously.

Another is about callousness. While it is already outrageous for government thieves to milk public funds for their luxurious lifestyles during so-called normal times, to see them do so as the nation gasps for air is enraging, to say the least. It conjures images of thieves inside your house with their fingers in a tight grip of your throat as you lay in bed attached to a ventilator.

But briefly, let’s take our mind off the fact that anomalous spending is taking place at a time when it would deserve the capital punishment that current officials are trying to revive.

What could be equally important to ask is, who pays for this leakage or outright theft of public funds?

Is it the so-called oligarchs at whom Mr. Duterte has fired some of his loudest and most colorful expletives? Is it the new cronies that are rising to new heights through their connection to the seat of power? Is it officials whose asset and liability records cannot be examined for unusual or outright ill-gotten wealth because, under this administration, transparency is not a right but a privilege? Is it the political families who had been driven into flight after plundering and bludgeoning the nation, and yet dancing again years later in the halls of power to take advantage of the democratic space they had buried with their kleptocratic ways at the height of their reign?

The answer would come from what could be the most liberal leader emerging from centuries of tradition in the Catholic Church.

“Corruption is paid by the poor,” said Pope Francis. 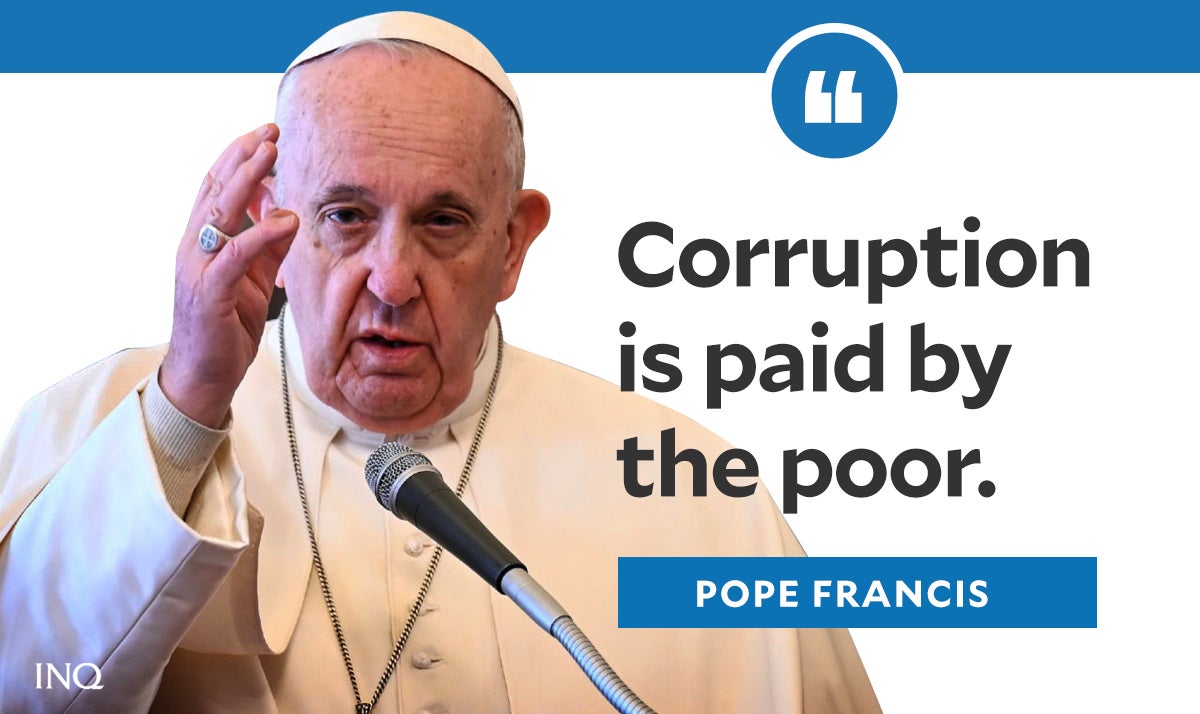 The capacity of the poor to bear the burden of corruption, however, is not as infinite as the amounts of public money being misused or stolen outright by officials.

In time, people bled dry of their wherewithal to make ends meet will be drawn to do either of two things—just die in place, or rise to their feet clinging to a knife.

Poverty, according to the Greek philosopher Aristotle, is the parent of revolution and crime.

Tony Bergonia is a former Inquirer desk editor and reporter.