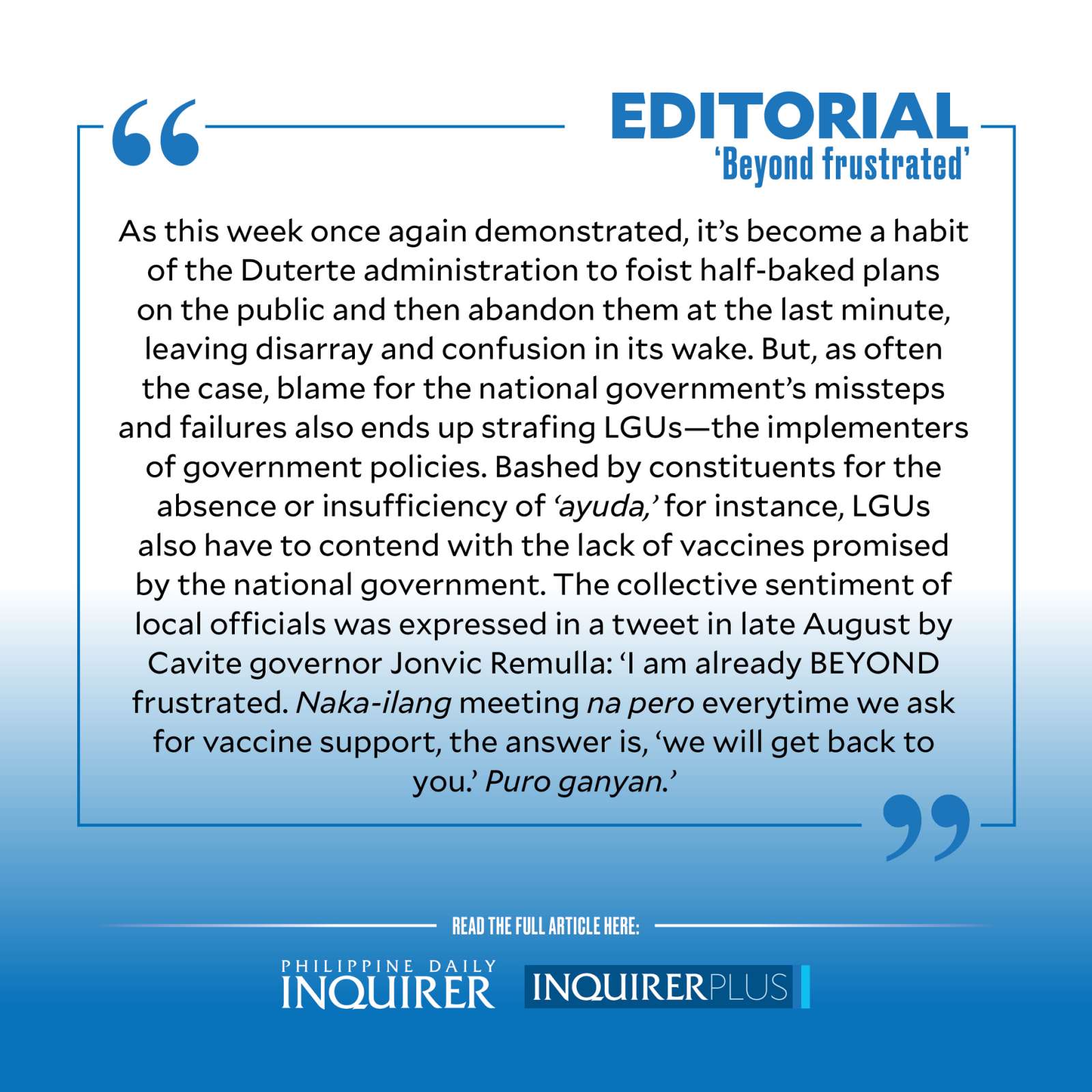 As this week once again demonstrated, it’s become a habit of the Duterte administration to foist half-baked plans on the public and then abandon them at the last minute, leaving disarray and confusion in its wake. But, as often the case, blame for the national government’s missteps and failures also ends up strafing local government units (LGUs)—the implementers of government policies, even if they are barely consulted on grand decisions disgorged from on high.

Bashed by constituents for the absence or insufficiency of “ayuda,” for instance, LGUs also have to contend with the lack of vaccines promised by the national government. The collective sentiment of local officials was expressed in a tweet in late August by Cavite Gov. Jonvic Remulla: “I am already BEYOND frustrated. Naka-ilang meeting na pero everytime we ask for vaccine support, the answer is, ‘we will get back to you.’ Puro ganyan.”

The administration’s shambling response to the health emergency has prompted LGUs and private companies to order the needed jabs at their own expense to inoculate employees and their families, using the government’s multiparty agreement (MPA) framework. Still, despite that initiative, the vaccines have only trickled in, forcing several LGUs to cancel their vaccination schedules because of lack of supplies. Deputy Speaker and Cagayan de Oro Rep. Rufus Rodriguez pointed out that around 300 companies and LGUs have sought to buy some 10 million vaccine doses, but can’t, because the National Task Force Against COVID-19 (NTF) has “left unsigned” their purchase orders. The papers are reportedly “sitting on the desk” and waiting for the approval of NTF chief Carlito Galvez Jr.

Rodriguez has filed a House resolution seeking an official inquiry into the delays in vaccine procurement, as has Sen. Juan Miguel Zubiri in the Senate. “Until now, we’re still waiting, not a single tripartite agreement of these local government units has been signed,” Zubiri said. “It’s all on hold.”

Galvez’s explanation is that there has been a shortage of global vaccine supplies in recent months, with rich countries reserving the jabs as booster shots for their citizens. Also, per Galvez, some vaccine makers like Moderna and AstraZeneca have said they are “no longer accepting vaccine orders through MPAs for the time being,” while Johnson & Johnson is “not open” to the arrangement. Meanwhile, the Novavax vaccine has yet to secure an emergency use authorization from the Food and Drug Administration, while manufacturers of Sinovac, Pfizer, and Sputnik V “intend to prioritize the orders of the National Government given current supply constraints.”

While assuring LGUs that the national government has enough funds to procure the jabs and have ordered the needed doses, the vaccine czar has asked local officials to “instead use the funds they have allocated for vaccine procurement for strengthening their prevent-detect-isolate-treat-reintegrate or PDITR strategy,” because “this, along with COVID-19 vaccines, remain the best ways to contain and mitigate the impact of COVID-19.”

That remains no consolation to LGUs who are pinning their hopes on the vaccines now that surges driven by the Delta variant are also ravaging the provinces. Hospitals outside the epicenter Metro Manila have been reporting full capacity, with COVID-19 patients being treated in tents, parking lots, inside their vehicles, or on monobloc chairs pushed together. The alarming situation in areas with even more fragile health infrastructure puts into question the government’s equitable allocation of available vaccines.

Vaccines are not the only critical items running short in the provinces. Photojournalist Ezra Acayan recently documented the work of a group of health workers crossing rivers and mountains in their hazmat suits, to trace possible COVID-19 patients in remote barangays in La Union. The group said it was forced to wear the suits in an effort to conserve limited PPE supplies in government health facilities.

Adding to the LGUs’ woes is PhilHealth, with the state insurer’s unpaid hospital claims threatening to cripple the operations of private hospitals. Iloilo City Mayor Jerry Treñas recently filed a complaint at the Ombudsman against PhilHealth, for hospital dues in his city amounting to some P932 million. “We are all contributors to PhilHealth and as taxpayers, we are paying them to help us especially during this difficult time. I am filing a complaint … so we prevent the collapse of our health care system during this pandemic,” said Treñas.

Not all LGUs have the resources, the moxie, and the time to do battle against national government agencies to demand what’s due them. But, in the middle of their profound frustrations at this time over the national government’s day-to-day gross incompetence and neglect of duty, many must be entertaining the same thought.