Listen to the radio 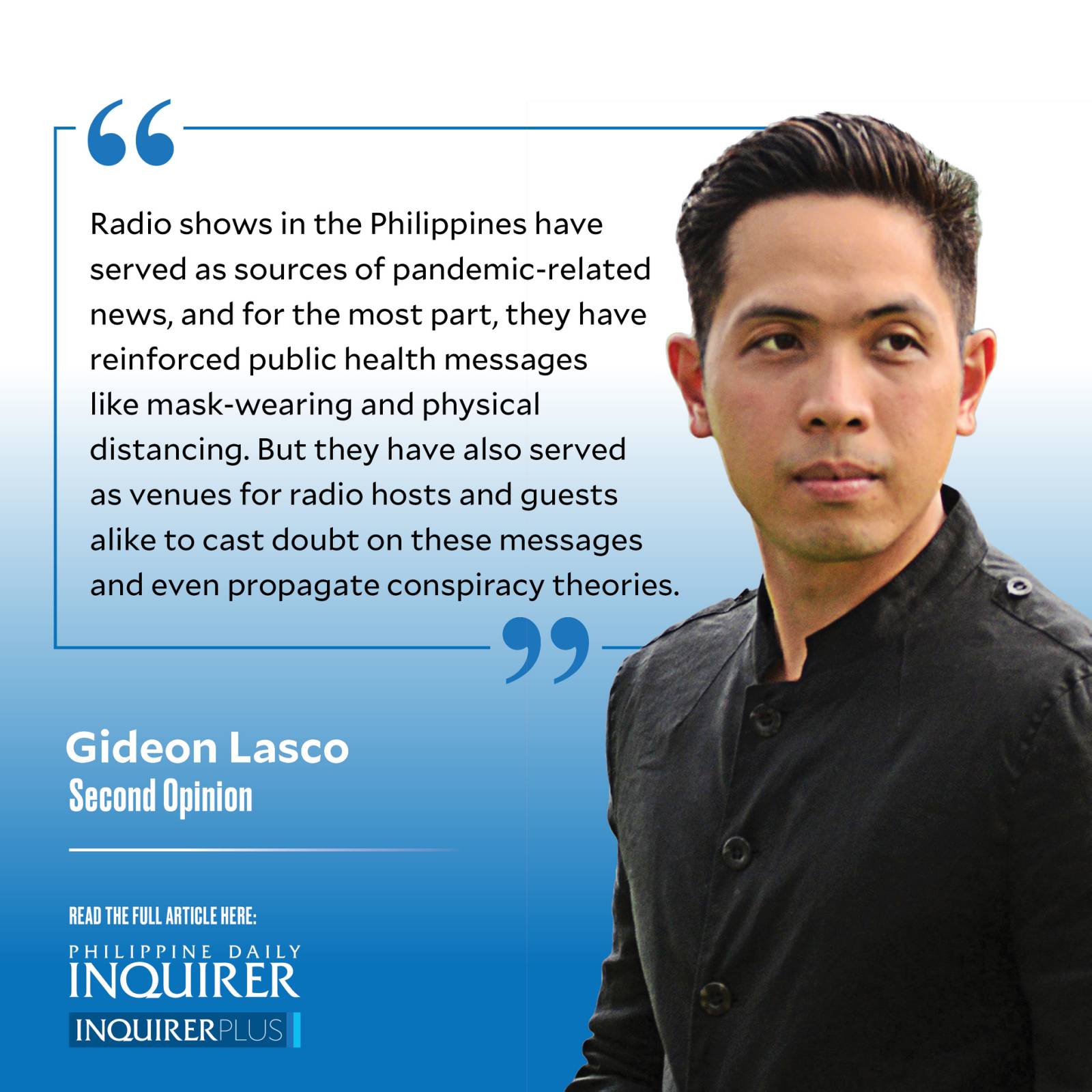 The communications scholar and UP Diliman professor Clarissa David once told me that if we are to understand people’s sentiments, “we should listen to the radio,” because that’s where many popular ideas circulate, reflected, and reinforced by radio personalities whose reach we academics tend to underestimate—in part because we ourselves seldom listen to them.

Her observations are corroborated by efforts to map the Philippine media landscape. For instance, the Kantar Media Habits Survey 2018 found that 52 percent of Filipinos listened to the radio at least once in the past seven days, and that the average listener spent 2.5 hours a day on the radio. These figures likely hold true today, especially since radio shows are also accessible on television and online.

I am reminded of these facts and figures today, amid the COVID-19 pandemic. Radio shows in the Philippines have served as sources of pandemic-related news, and for the most part, they have reinforced public health messages like mask-wearing and physical distancing. But they have also served as venues for radio hosts and guests alike to cast doubt on these messages and even propagate conspiracy theories. When Dr. Romeo Quijano, a retired professor of pharmacology, falsely claimed in DZRH last month that vaccines are “more dangerous” than COVID-19, it prompted an outcry in the medical community, but his statements have continued to circulate online, reaching hundreds of thousands, if not millions, of Filipinos.

This is not by any means the first time that radio has played a role in shaping people’s opinions about a contemporary issue. President Duterte’s drug war may be shocking in terms of its violence and disregard for human life, but discourse aired on radio shows have arguably set the stage for it, not least by stoking a “moral panic” around “drug addicts.” It is typical, for instance, to hear radio personalities conclude, without basis, that “only a drug addict is capable of such a gruesome crime” when reporting about rape or murder, reinforcing perceptions about people who use drugs. If, as the radio historian Carolyn Birdsall (2012) noted, radio creates an “imagined listening community,” then it is likely that such a community would have welcomed Mr. Duterte’s rhetoric that “drugs are destroying the country” and “drug addicts” deserved to die.

Meanwhile, we can also point to the rise of “Tulfo justice” as another example of the power of radio in shaping popular discourse. By offering to provide justice through his radio show, Raffy Tulfo has effectively become the face of justice for many Filipinos, perpetuating the noxious idea that our institutions are useless, people are weak, and they need well-connected protectors or backers who will take their side.

One more observation: Some radio hosts often blur the lines between news, opinion, and commercial endorsement. One can routinely hear them vouch for the efficacy of, say, liver or prostate supplements in the middle of their shows. I feel that radio, by the nature of the medium and as manifested by the instances I cited, allows for a kind of “epistemologic flexibility” that, left unchecked, can have dire consequences for public consciousness.

Of course, I do not mean to generalize. In the same way that radio has misinformed, it has also provided timely, accurate, and accessible information, not to mention inspiration, to countless Filipinos, which is why many journalists—and people behind ministries and advocacies—have stayed on the air all these years.

I think of the veteran broadcast journalist Ces Drilon, who has come out of retirement to host a radio program, “Basta Promdi, Lodi” in RMN-DZXL 558.

I think of my aunt Josephine Agapito, a UP Manila professor who, together with her co-hosts in “Pinoy Scientist” at DZEC 1062 Radyo Agila, has tirelessly talked about a range of science issues, from endangered species to the COVID-19 pandemic, in ways that the public can understand.

I think of all the medical doctors, nurses, and health journalists who use their time on the air to reach countless Filipinos, patiently explaining the benefits of vaccination, answering listeners’ questions, and debunking false claims like those made by their peers.

And I think of the local radio commentators who bravely hold politicians in their cities and provinces to account, many risking and even losing their lives doing so.

I believe that they are doing invaluable work.

But we need to interrogate those who are, in the same medium, doing significant harm.