Another problem, another committee

So what’s the campaign launched on Sept. 3 and dubbed “Project Kasangga: Aksyon Laban sa Korapsyon” expected to do this time?

Here is where we’re at as outrageous details emerge from formal inquiries into the questionable handling of pandemic funds by the Department of Health (DOH). The Palace is on defend-attack mode—actually “panic mode,” according to Sen. Panfilo Lacson, whom President Duterte has inexplicably bashed for his alleged bad-hair days. Its mouthpiece is on troll behavior, notes Senate Minority Leader Franklin Drilon. The President has gone so far as to order the Senate to drop what it’s doing, to stop looking into ongoing government projects, even to threaten to spill the beans, whatever they are, on Lacson, the “fat” Sen. Richard Gordon, and other investigators.

He continues to defend Health Secretary Francisco Duque III despite a health system in near collapse. He demands to know what is so wrong with paying a debt of gratitude to people who were of help to him in some way, never mind that they—such as a former election lawyer presiding over the purchase of overpriced medical supplies—have turned out to be embarrassingly bad choices.

You’d think the Presidential Anti-Corruption Commission (PACC) would be hot on the scandal stirred by the annual report of the Commission on Audit. But no. On Aug. 24, its chair Greco Belgica was heard saying it would look into flagged agencies once state auditors file a “notice of disallowance,” or that a law had been violated. “Then we can investigate and file a case,” he said. 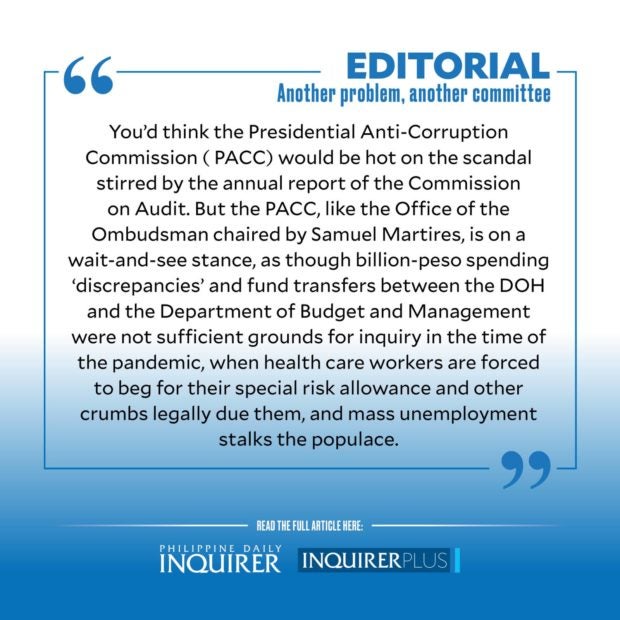 The laidback stance of the purported “mega task force against corruption” is baffling. Indeed, as Vice President Leni Robredo told ANC on Monday, the PACC should have been first to look into the DOH’s questionable procurement of medical supplies given its mandate “from the very start.” But the PACC, like the Office of the Ombudsman chaired by Samuel Martires, is on a wait-and-see stance, as though billion-peso spending “discrepancies” and fund transfers between the DOH and the Department of Budget and Management were not sufficient grounds for inquiry in the time of the pandemic, when health care workers are forced to beg for their special risk allowance and other crumbs legally due them, and mass unemployment stalks the populace.

But if the PACC is by its admission forced to sit on its hands, will Project Kasangga conceivably do the trick? The campaign includes an Anti-Corruption Coordinating Council, a 49-member interagency body with the President and Belgica as chair and vice chair, that is apparently intended to put the fear of God in every nook and cranny of the administration.

Under the council, the PACC will be present in each government office down to the barangay level to fight corruption. “The signing of Project Kasangga seals the President’s firm commitment to really fight corruption the best that he can by institutionalizing anticorruption committees in all levels of government,” Belgica said. This is something unseen “in any government,” he said.

More: The Anti-Corruption Coordinating Council will apparently mimic the government’s centerpiece war on drugs and anti-insurgency drive, under which rights abuses and thousands of killings of activists and petty drug suspects have been recorded. Per Belgica, corruption information at the local level may be quickly “thrown” to the committees for validation. “If true,” he said, “it can be immediately addressed.”

All this while the Office of the Ombudsman and the Task Force Against Corruption under the Department of Justice stand by, and the President himself clears the usual suspects.

Yet Project Kasangga is not an entirely new animal. A signing of its anticorruption manifesto was held last May 31, with Trade Secretary Ramon Lopez delivering a speech committing the Department of Trade and Industry to partner with the PACC in “investigative inquiries and lifestyle checks, particularly on presidential appointees who are allegedly involved in graft and corruption practices.” It’s not known if anything has resulted from the partnership.

Since we’re strolling down Memory Lane, weary observers will recall a couple of instances demonstrating the PACC’s work. In November 2020, a PACC report identified a number of lawmakers who supposedly made off with taxpayer money through government infrastructure projects. Mr. Duterte publicly named them (to their loud protests), admitted that there was no “hard evidence” to back the allegations, and said they would be presumed innocent until proven guilty. Also last year, the PACC received complaints of irregularities in the distribution of “ayuda” or cash assistance to the impoverished.

And, in another retelling of the story of our lives, nothing was heard from these cases again.

Why stop the hearings?