Saving for the lean days

The Bangko Sentral ng Pilipinas (BSP) recently highlighted on its website the story of Adonis Buemia, a 70-year-old ice delivery man who painstakingly saved some P50,000 inside a cabinet in his residence for years. From his P300 daily income, and “despite being a solo parent and a primary caregiver to a special child, Buemia managed to save P100 or one-third of his daily income, which he tucked away inside a cabinet in his home,” according to the BSP report. “However, his savings almost disintegrated in the cabinet after termites feasted on them.”

A distraught Buemia appealed for help in the Facebook account of a TV program, and the call reached the BSP. The agency stepped in to help, checking what was left of the mutilated bills and endorsing their replacement by a bank near Buemia’s residence. “On 11 August 2021, Mr. Buemia finally received the replacement of his cash savings,” said the BSP.

The central bank saw in the incident an opportunity to remind the public about the risks of keeping one’s hard-earned money at home. “To avoid damage caused by termites, water, and other elements,” it stressed, “the BSP encourages the public to keep their savings in BSP-supervised financial institutions where they will be safe and secure.” 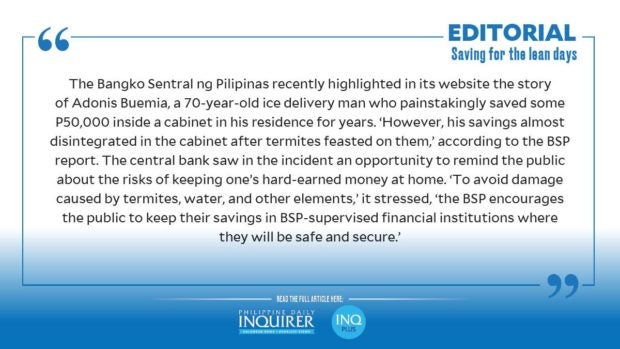 Buemia’s quaint example is not unique. The Philippines has a low savings rate (i.e., the percentage of its population with a relationship with a financial institution), although the COVID-19 pandemic since last year that quarantined people to their homes may have improved the situation. Prior to the health crisis, available BSP financial inclusion data showed that the percentage of adults with savings in a bank was only 21 percent, while the percentage of adults who kept their savings at home was at a high 51 percent in 2019. The World Bank Global Findex 2017 (which is conducted every three years) placed the country in the middle, or fifth in Asean, in percentage of adults with a formal bank account at 34.5 percent. Singapore was on top with 97.9 percent, followed by Malaysia with 85.3 percent, Thailand with 81.6 percent, and Indonesia with 49 percent.

More recent BSP data, however, suggest a more encouraging picture. Figures from the July 2021 BSP financial inclusion dashboard showed that the number of bank depositors rose by 10.1 percent to 70.2 million in the second quarter of 2020 (the start of the pandemic) from 63.8 million in the same period in 2019.

Digital finance also experienced a surge due to the health crisis. The number of bank deposit accounts accessible digitally increased by 118.4 percent to 4.8 million from 2.2 million, and the amount of deposits jumped by 107.1 percent to P4.4 billion from P2.1 billion. For electronic money accounts, the number of active e-money wallets and prepaid cards linked to these wallets also jumped by 61.6 percent to 14.2 million from 8.8 million.

The issue of low savings rate does not seem to lie in the lack of financial institutions. Per the BSP, the percentage of cities and municipalities with access to all types of financial services—savings, credit, insurance, payments, and remittances—was a high 76 percent as of the second quarter of 2020. However, banks do need to expand their coverage to more unbanked areas. Official figures show that banking presence has been concentrated in urbanized, densely populated, and developed regions: Metro Manila with a 29.8-percent share, its southern neighbor Calabarzon with 14.6 percent, and the adjacent area to the north, Central Luzon, with 10.5 percent.

There is another problem: financial literacy. The BSP’s measure of financial literacy—the percentage of adults who got a perfect score in a financial literacy quiz—indicated a low 8 percent according to its 2019 Financial Inclusion Survey. More Filipinos need to learn how to manage their finances wisely. As the pandemic has forced the public to stay at home and become mostly glued to the internet, it is worth being reminded at this time, for instance, that with the lean, difficult days not appearing to end anytime soon, it is better to save rather than be enticed to spend indiscriminately on online sales.

Buemia was lucky to see his termite-damaged bills replaced, and he learned a valuable lesson in keeping his money where it would be safe. Monetary authorities have long been encouraging the public to keep their savings in secure financial institutions; the BSP issued a circular in 2018 to make it easy, accessible, and convenient for Filipinos to save money. This is through the Basic Deposit Account, an affordable, uncomplicated, and easy to open instrument that even those without valid IDs can apply for, using other documents or through the apps of some banks. Its required opening deposit amount is only P100 or less, and it has no maintaining balance and dormancy charges. Financial inclusion can’t get any easier than this.