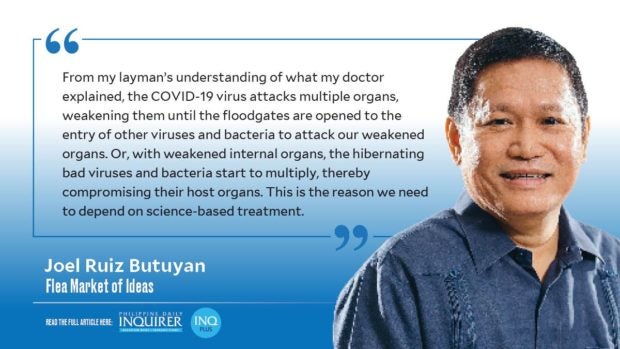 I spoke too soon when I wrote last week that my wife and I were already recuperating after we were diagnosed with COVID-19. Little did we know that the virus was just getting started and things were dangerously turning for the worse. A few hours after I turned in my article last week, my oxygen level plummeted from a normal of 95mm. to 81mm. This despite the fact that I was already hooked to an oxygen tank. My body was suddenly becoming incapable of taking in enough oxygen to sustain life.

On board an ambulance, my blood pressure shot up to a high of 200mm. At the hospital, my CT scan showed that I had developed severe pneumonia, which was not detected by two earlier X-ray tests. My blood chemistry also showed that several of my internal organs had started producing toxins. On the other hand, my wife developed a very severe form of diarrhea, moderate pneumonia, hard dry cough, nasal congestion, and body pain and swelling.

It was strange that my wife was experiencing so many aches and pains, but the danger she faced was less life-threatening compared to mine. I was only feeling minor inconveniences, but without me knowing that my life was already in serious danger. I was placed on high flow oxygen support even though I didn’t have difficulty breathing, but because the tester was showing that my body was not taking in enough air. This is the very treacherous nature of COVID-19.

My wife and I were administered a cocktail of drugs, including remdesivir, to fight lung inflammation, prevent sudden heart attack, and foil bacterial, viral, and fungal infections. I was even administered the hard-to-find tocilizumab, which is given only to critically ill COVID-19 patients. I was also initiated to daily insulin shots because steroids were messing up with my blood sugar. In a span of five days, I was injected, pricked, and drawn blood from for not less than 50 times.

There’s a huge increase of husbands and wives who are being jointly admitted as COVID-19 patients, according to hospital staff. Even entire families are getting confined, occupying entire hospital wards. The virus is already inside our homes and the virus transmission is now among family members. It is very important that we must now follow the recommendation to use masks and practice social distancing even inside our homes. Many people cannot imagine the extreme difficulty of both parents and even entire families getting sick with the virus until it becomes a horrific reality. Trust me, it turns your world upside down.

There were many well-meaning advice for us to take ivermectin relayed by dear friends who are very respected professionals. I am worried that there’s an overconfidence in ivermectin’s anecdotal effectiveness to the point that people are resorting to it instead of getting vaccinated, and instead of shifting to a healthy diet, sleep regimen, and breathing exercises. Scientific evidence point to the fact that an overwhelming majority of people will recover from the virus on their own, even without any special treatment. My deep worry is that these normal recoveries are being wrongly attributed to ivermectin’s perceived efficacy, and people who have serious conditions that have no physical manifestations, like me, will entirely depend on ivermectin, which can lead to fatal consequences.

From my layman’s understanding of what my doctor explained, the COVID-19 virus attacks multiple organs, weakening them until the floodgates are opened to the entry of other viruses and bacteria to attack our weakened organs. Or, with weakened internal organs, the hibernating bad viruses and bacteria start to multiply, thereby compromising their host organs. This is the reason we need to depend on science-based treatment. Not doing so is like playing Russian Roulette with our lives.

We’re not yet out of the woods as I write this in hospital confinement, but I sense that my wife and I have dodged a dangerous bullet. If we survive this, we will owe our lives to our outstanding attending physicians, my brother Dr. Glenn Ruiz Butuyan and Dra. Christine Agatha Untalan, as well as their team of very caring health professionals at Santiago Medical City in Isabela province.