Is greed a mental disorder? 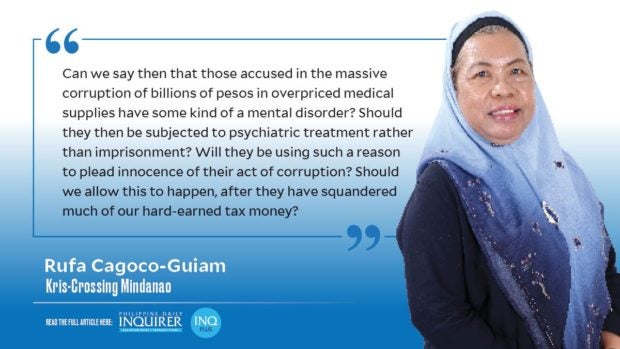 The recent intense verbal exchanges in the Senate hearings on the government’s purchase of overpriced medical and health supplies have given rise to a lot of questions and accusations of unbridled greed of those who facilitated this massive corruption. Just thinking that this is happening when a lot of our people are suffering from the lack of appropriate medical attention in the midst of the pandemic makes this act even more repulsive. One would think that if these supplies were provided for free to the most vulnerable and the poorest sector of the population for their protection, then it would have become a kind of a saving grace for those who are accused of facilitating the dubious transactions.

However, this is not the first time we hear about transactions using government money (that is our money) to purchase questionable equipment, at prices that are equally preposterous.

In the past and in the present, the unabated greed of government officials has given rise to the purchase of overpriced equipment, services, construction of infrastructure, and other government acquisitions. The list is long, and just knowing about how much money was squandered is simply mindboggling.

Almost everyone is ready to conclude that all government officials commit corruption in their tour of duty. This can range from petty acts of using government facilities for personal use to massive ones like the recent purchase of health supplies at outrageous prices.

All this makes me realize that perhaps there is something about being in power that can push people to dig a bottomless pit to urge them to do something and to do it repeatedly. If left unchecked, this will become a habit, or worse, an addiction of a different kind. The hunger for power seems to be insatiable, thus pushing people to do more acts of unbridled corruption.

As a cultural anthropologist, I have studied the range of human behavior in different cultural contexts, and many times I am challenged at the wide diversity of motivation and other psychological explanations for human behavior. I was trained to look at core values that define what we refer to as “national character”—that central set of traits that distinguish how a member of an ethnic or national group tends to behave, given certain circumstances. We hypothesize how a typical Japanese government official would react to being bribed, in contrast to how his Chinese or Filipino counterpart would. But these are just suppositions for the most part, since the national character tendency is just that, and not an absolute indicator of human behavior.

In my readings on greed and what causes such behavior, I came across this article, “Greed: Crises, Causes, and Solutions” published in the International Journal of Humanities and Social Science, Vol. 5, No. 7 (July 2015). In this article, author Dr. Jeevan D’Souza argues that the “elemental genesis of worldwide suffering is the exercise of human greed, acquisitiveness, and self-indulgence under current social conditions …”For D’Souza, “…greed is an existential human problem which can be scientifically understood and mitigated through evidence-based, biological, psychological and sociological interventions.”

The author enumerated and described various studies that point to the conclusion that “…greed and acquisitiveness have biological, psychological and sociological drives. Characteristics of greed are closely associated with biological and psychological disorders such as substance addiction, behavioral addiction, Narcissistic Personality Disorder (NPD) … and Obsessive-Compulsive Personality Disorder (OCPD) …”

Some popular Philippine examples of unbridled greed like the acquisitiveness of former first lady Imelda Marcos (with her legendary 3,000 pairs of imported shoes) come to mind. Her acquisitiveness was linked to how she was deprived of these luxuries as a child.

Can we say then that those accused in the massive corruption of billions of pesos in overpriced medical supplies have some kind of a mental disorder? Should they then be subjected to psychiatric treatment rather than imprisonment? Will they be using such a reason to plead innocence of their act of corruption? Should we allow this to happen, after they have squandered much of our hard-earned tax money?