Listen to their protests 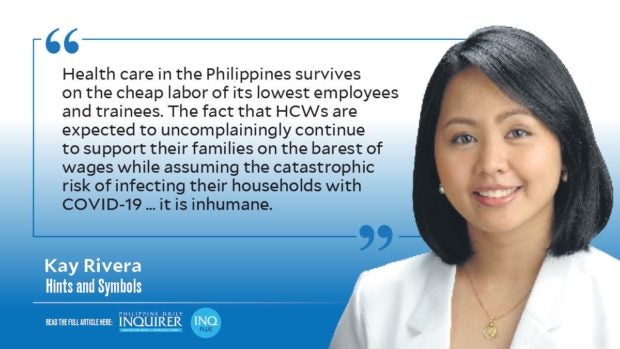 Readers of this column must grow weary of how often it is used to speak about the plight of health care workers (HCWs). However, these are not issues that I, as a health care worker with a platform, can avoid. Most of my colleagues in the hot zones are too busy fighting burnout or surviving to be able to write publicly about their concerns. In this column, I refer to the recent criticisms that HCWs received after last week’s protests demanding the resignation of the health secretary, timely and adequate compensation and risk allowances, and provisions for meals, accommodation, and transport. I also refer to the tone-deaf and performative plans to put up a memorial for fallen HCWs.

There were concerns raised about such protests leading to spreader events, which to some extent are legitimate, though it’s clear that the effort to go out in personal protective clothing was done in part to mitigate such concerns. My chief problem with the backlash for protesters is that other concerns are used to undermine the truth: that the protesters’ concerns are painfully legitimate.

“HCWs are entitled to their political beliefs,” said one keyboard warrior, “but they must remain apolitical to serve.” Health is political and always has been. I refer the reader to similar columns on this topic (such as “Case studies,” 3/23/20).

“The profession that they are in is not a job,” said someone else, “but a cause that aims to save lives.” Are HCWs then magically immune to the need for a living wage? Has the Hippocratic Oath made them immune to needing to eat, feed, and clothe their children and to send them to school, or to pay their bills? How much longer are we going to romanticize the profession in order to excuse lacking compensation?

A member of the National Task Force Against COVID-19 called out protesters “who prefer money over lifesaving,” as if just compensation is somehow mutually exclusive from saving lives. A Twitter user accused protesting HCWs, “naging pera pera na lang instead of rising to the occasion.” They have been rising to the occasion since the beginning of the pandemic, and enduring unfair working conditions long before that; I don’t know how many more ways I can say this. Health care in the Philippines survives on the cheap labor of its lowest employees and trainees. The fact that HCWs are expected to uncomplainingly continue to support their families on the barest of wages while assuming the catastrophic risk of infecting their households with COVID-19 … it is inhumane. The fact that their critics are often ones who earn their salaries while sitting at home is the most unjust, infuriating insult. They are accused of greed and being “mukhang pera” while so many take home less than P10,000-13,000 a month for eight- to 36-hour shifts in hazmats, with no provisions for food, transport, or insurance, while government plays hide and seek with billions in COVID-19 funds.

Then there is another claim by those who would vilify HCW protesters: that they are communists in disguise. “Parang hired lang ata ung [sic] iba dyan,” said one Twitter user, “tapos pinag-costume ng naka scrubs.” Meanwhile, we actually do know real HCWs who participated—radiology technicians, pharmacists, nursing aides, ward clerks, nurses. Then there is the argument that communist HCWs are just “using the profession to advance their political agenda.” What harmful political agenda is that? Timely release of salaries and hazard pay and the conferment of deserved work benefits? The stepping down of corrupt and incompetent leaders, the punishment of corruption? Is it so far-fetched to think that, instead of workers succumbing to some nebulous red agenda, the protesters are just tired of working in these conditions? Why must the whisper of communism be used to undermine legitimate requests by ordinary workers?

And then there is the proposed mural for COVID-19 frontliners. HCWs and their families are not incapable of appreciating such a gesture. But it is nonsensical to make such a symbol of respect, honor, and reparation when little effort is made for reparations in the present, and while our country struggles with misappropriated funds that could continue to save, or relieve, the suffering of the living. Is it really so urgent to allocate funds to put up this memorial? Are we really to accept being called “heroes” as an adequate substitute to just compensation?

What HCWs deserve, and want, is for just concerns to be heeded and to receive a fair response. Not to be told how to do their jobs, to be told to stay dumb and quiet, to be Red-tagged, just for asking for living wages, a transparent and competent pandemic response, some benefits, and a timely risk allowance. They don’t deserve to be called heroes in one breath and ungrateful in the next, by people who sit at home, not shouldering even a fraction of the risk that HCWs assume every day.