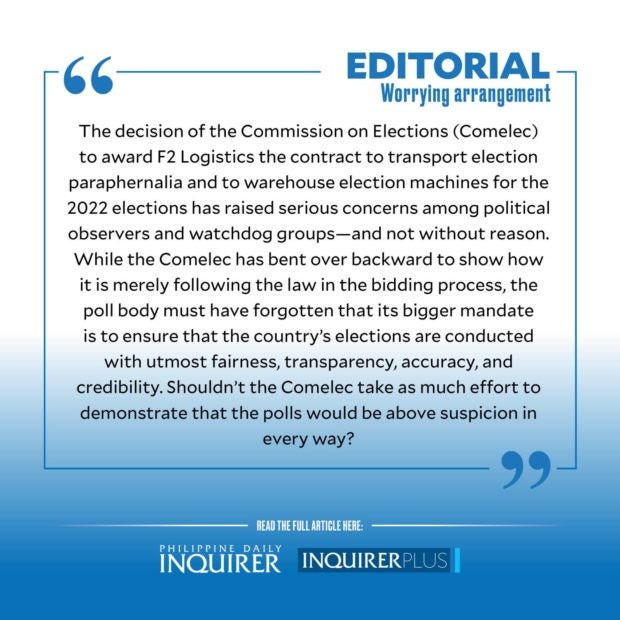 The decision of the Commission on Elections (Comelec) to award F2 Logistics the contract to transport election paraphernalia and to warehouse election machines for the 2022 elections has raised serious concerns among political observers and watchdog groups—and not without reason.

According to several sources, among them Bloomberg, the Securities and Exchange Commission, and The Wall Street Journal, F2 is chaired by Davao businessman Dennis Uy, who contributed some P30 million to President Duterte’s election war chest in 2016, making him the President’s third biggest campaign donor.

While Comelec has described F2 as the “most qualified” bidder after it bested LBC Express, 2Go Express, and Airspeed International with its lowest offer of P535.99 million against a maximum contract price of P1.61 billion, various quarters have expressed apprehensions about the logistics firm’s looming critical role in next year’s polls. Not only is the Duterte administration the incumbent with all the power, resources, and connections to influence the 2022 elections; Mr. Duterte has also declared that he is running for vice president.

Such scruples appear to have been lost on Comelec officials, however.

Comelec chair Sheriff Abas, who earlier said he had asked the special bids and awards committee to look into possible conflict of interest in the links between Uy and F2 Logistics, dismissed calls for the firm’s disqualification from the bidding process, saying that many businessmen are “major contributors” to different politicians, “so it’s not automatic” that they are disqualified from Comelec contracts.

Comelec Commissioner Rowena Guanzon, meanwhile, cited “the bidding rules,” adding that it was F2 and not Dennis Uy’s name that was in the bidding documents. Comelec spokesperson James Jimenez also noted that bidding rules are “very specific” about disqualifying bidders—only if they face charges for wrongdoing.

But election watchdog Kontra Daya urged the poll body “not to be tied down by legalities,” and to consider the “propriety” and “ethics” surrounding its decision to choose F2.

“Comelec should realize that awarding the contract to a publicly known Duterte crony is unacceptable, and making him responsible for an important election task is unconscionable,” said Kontra Daya convenor Danilo Arao. The Uy connection, he warned, could “cast doubt on the integrity of the upcoming elections.”

F2 is not a newcomer in the field; in the 2018 barangay and Sangguniang Kabataan elections, it was contracted as a logistics partner by Comelec for deliveries nationwide of election forms, supplies, and paraphernalia. It also secured two of four delivery contracts for the May 2019 polls.

But this time, the Comelec appears to have rushed the awarding of the contract in the face of mounting public criticism.

On Tuesday, during a TV interview, Jimenez allayed fears about a done deal, saying nothing was final and that with the tedious post-qualification process, the decision would probably take up to the second week of September. But barely 24 hours later, on Wednesday, the Comelec announced that F2 was now its official logistics partner. What caused the abrupt shortening of the announced review timeline?

Fears of a quid pro quo in the forthcoming elections aren’t helped any by the observation that Uy’s business empire, which includes 2Go, Phoenix Petroleum, and Udenna Corp., part of the consortium that won the contract to be the Philippines’ third telco player, has grown tremendously during the Duterte administration.

Mr. Duterte has also gloated about the “sacks of money” (“sako-sakong pera”) he would bring to provinces and cities when he hits the campaign trail. Responding to the public scorn, presidential mouthpiece Harry Roque said the President was not referring to public funds, and that the Omnibus Election Code does not prohibit “raising funds from private individuals.” Several names would easily come to mind with that.

While the Comelec has bent over backward to show how it is merely following the law in the bidding process, the poll body must have forgotten that its bigger mandate is to ensure that the country’s elections are conducted with utmost fairness, transparency, accuracy, and credibility.

Shouldn’t the Comelec take as much effort to demonstrate that the polls would be above suspicion in every way, especially since by February next year, Aquino appointees Guanzon and Abas will be retiring, leaving behind a Commission composed entirely of appointees by President Duterte—who, in an unprecedented situation, will be one of the candidates in May 2022?

And shouldn’t lawmakers, who had held hearings on the integrity of Smartmatic in previous elections, likewise rouse themselves to probe the propriety of this worrying arrangement?