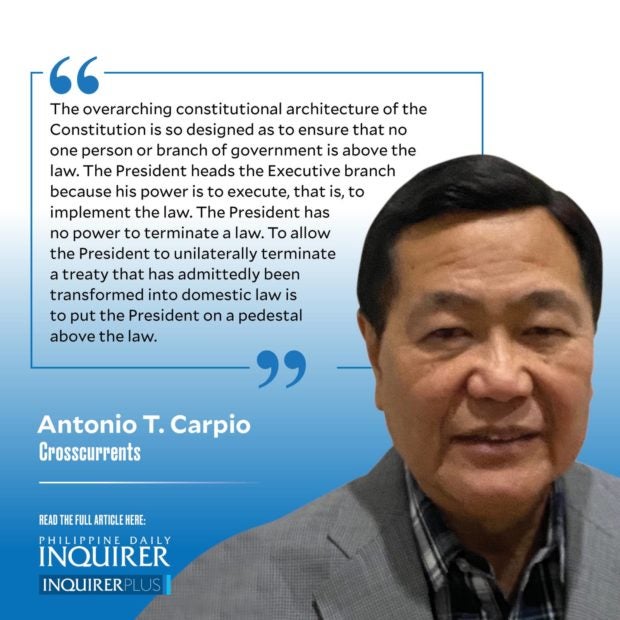 Under our democratic and republican system of government as enshrined in the 1987 Constitution, Congress enacts, amends, or repeals a law, the President executes the law, and the Judiciary declares a law void if it contravenes the Constitution. This is the fundamental check and balance among the three co-equal and independent branches of government to ensure that no one person or branch of government is above the law.

There are additional checks and balances or shared responsibilities built into the Constitution. Within Congress itself, a bill becomes a law only if approved by both chambers of Congress. A law enacted by Congress may be vetoed by the President and this veto may be overturned by two-thirds vote of each chamber of Congress. An item in an appropriation, revenue, or tariff bill may be vetoed by the President. The President can enter into treaties on his own subject to concurrence by two-thirds vote of the Senate.

The preservation of our democratic and republican system of government depends on the faithful observance of these finely crafted constitutional checks and balances and shared responsibilities. In the recent case of Pangilinan v. Cayetano, the Supreme Court unanimously upheld the unilateral termination by President Duterte of the treaty wherein the Philippines acceded to the Rome Statute that created the International Criminal Court (ICC). The Senate had given its concurrence to this ICC treaty in 2011, but President Duterte terminated this treaty in 2018 without Senate concurrence.

The issue in Pangilinan v. Cayetano was whether the President could unilaterally terminate a treaty that had previously been given Senate concurrence. The Supreme Court held that the issue was moot, stating: “The Philippines has done all that were needed to facilitate the withdrawal. Any subsequent discussion would pertain to matters that are fait accompli.” Thus, the Supreme Court upheld the constitutionality of the unilateral termination by the President of the ICC treaty for the simple reason that the termination had already taken effect under international law.

However, it is well-recognized that an act by a head of state may be valid and binding on a state under international law even as the same act may be unconstitutional under the state’s domestic law. Thus, if President Duterte unilaterally declares, even verbally, that he is abandoning the July 12, 2016 Arbitral Award in the South China Sea Arbitration and China accepts such unilateral declaration, the abandonment is valid and binding on the Philippines under international law even if such abandonment is certainly unconstitutional under Philippine law.

For the same reason, President Duterte’s unilateral termination of the ICC treaty is valid and binding on the Philippines under international law but unconstitutional under Philippine law. First, the Court in Pangilinan approved of the mirror principle—that the manner of entering into the treaty should be the same manner in terminating a treaty. Since a treaty can take effect only with the concurrence of the Senate, then a treaty can only be terminated with the concurrence of the Senate.

Second, the Court in Pangilinan admitted that a treaty is “transformed into domestic law by Senate concurrence.” Indisputably, the President has no power to terminate any domestic law using his Executive power alone. It follows that President Duterte has no power to unilaterally terminate the ICC treaty that had previously been given Senate concurrence.

Third, the Court in Pangilinan recognized that treaty-making is a shared responsibility between the President and the Senate as part of the checks and balances carefully crafted into the Constitution. As a check-and-balance mechanism, this shared responsibility in treaty-making would be meaningless if the President could just unilaterally terminate a treaty without Senate concurrence.

Lastly, the overarching constitutional architecture of the Constitution is so designed as to ensure that no one person or branch of government is above the law. The President heads the Executive branch because his power is to execute, that is, to implement the law. He takes an oath of office, prescribed in the Constitution, to “faithfully and conscientiously xxx execute (the) laws.” Terminating a law is the opposite of executing the law. The President has no power to terminate a law. To allow the President to unilaterally terminate a treaty that has admittedly been transformed into domestic law is to put the President on a pedestal above the law.