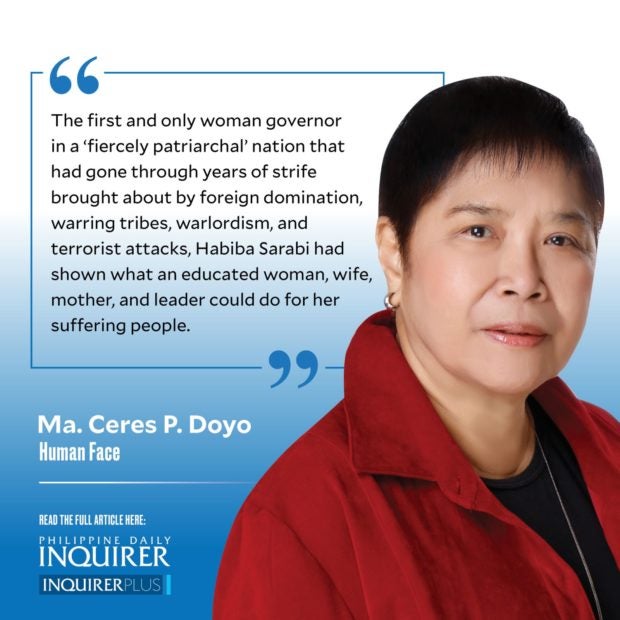 After the land of turquoise blue lakes, awesome cliffs, and sweet pomegranates had been turned into a place of terror, violence, and death, after the once fabled land of misty valleys, craggy hills, and historic monuments had become a battlefield, what was there to do?

“Rebuilding lives and the land in a socially divided nation” was the daunting task and challenge for Habiba Sarabi, governor of Bamyan province in Afghanistan.

I wrote that in 2013. Today, eight years later, Sarabi is on my mind while I watch the news about the extremist Taliban seizing power. Western troops and personnel fly out while desperate, fearful Afghans rush to find means to leave their homeland. Their so-called “Saigon moment” has come, so much like the US forces’ 1975 dramatic withdrawal from Vietnam after decades of fighting and countless lives had been lost.

A week or so from now the Ramon Magsaysay Award Foundation, now on its 63rd year, will announce new awardees who embody “greatness of spirit” and more. I bring this up because Sarabi was among the 2013 awardees, one of only three Afghans of the some 350 awardees since 1958. Of the three, two are women. It was Sarabi that I got to interview and write about. She was 57 then.

In choosing her, the RM Award Foundation (RMAF) recognized “her bold exercise of leadership to build up a functioning local government against great odds … serving her people with a hopeful persistence grounded in her abiding commitment to peace and development in Afghanistan.”

The first and only woman governor in a “fiercely patriarchal” nation that had gone through years of strife brought about by foreign domination, warring tribes, warlordism, and terrorist attacks, Sarabi had shown what an educated woman, wife, mother, and leader could do for her suffering people.

Coming from a family of relative means, Sarabi studied pharmacy at Kabul University and later specialized in hematology in India. She was teaching at the Kabul Medical Science College when the extremist Islamist Taliban forces seized power in 1996, sowed terror, and imposed harsh measures especially on women.

But before the rise of the Taliban, Afghanistan was already a troubled country. Russian occupation (1979 to 1989), civil war among Mujahedin groups (1992 to 1996), and Western intervention had already sown the seeds of chaos in the predominantly Muslim country. It did not take long for Afghanistan to become a training ground for anti-West extremist groups, with the ones linked with Osama bin Laden among them.

This was not the case when Sarabi was growing up. “The tribes got along,” she remembered.

To escape Taliban rule, Sarabi fled with her children to Pakistan where the latter could continue their education while she became a teacher and activist. She joined other Afghan women in organizing the Humanitarian Assistance for the Women and Children of Afghanistan (Hawca). She went to refugee camps, held classes on women’s rights, and organized doctors to work in the camps.

Despite the risks, Sarabi would traverse on foot the mountainous Afghanistan-Pakistan border to supervise some 80 literacy classes. She served as general manager of the Afghan Institute of Learning in Peshawar, Pakistan.

After the fall of the Taliban in 2001, Sarabi and her children returned to Kabul. She immediately set up a Hawca office, resumed teaching, and continued her work in the field of women’s rights and literacy. Sarabi declined an ambassadorial post. In 2003, she was appointed head of the Ministry of Women’s Affairs under the government of President Hamid Karzai.

Sarabi’s abilities did not go unnoticed. In 2005, she was appointed, that is, upon her own proposal, as governor of Bamyan (pop. half a million), a poor province in the central highlands, 150 kilometers from the capital Kabul. The appointment was a challenge because Sarabi was not a native of Bamyan. With her businessman husband and three grown children left behind in Kabul, Sarabi buckled down to work in her new post.

During Sarabi’s watch, Bamyan saw many changes. Roads and other infrastructure projects as well as health services were among her priorities. But the education of women was always important for her. Bamyan women started building careers, something once forbidden by the Taliban.

I wish I could share the longer story of Sarabi. The Taliban are back and have again seized power.