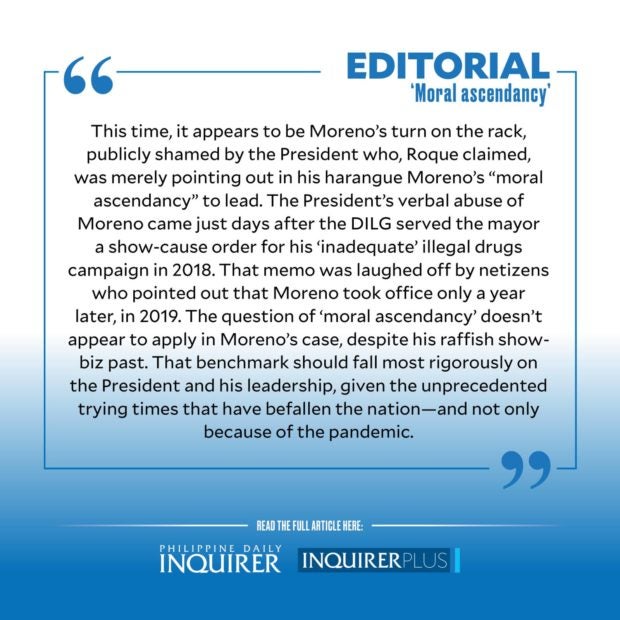 With hospitals at full capacity, the Delta variant of the COVID-19 virus setting record numbers of infection, and ordinary Filipinos desperately chasing after scarce vaccines and cash aid, what did President Duterte choose to do in his weekly address to the public this week?

Fire off a crude tirade against a perceived political rival, that’s what. The President slammed an unnamed mayor of an unnamed city for allegedly being “disorganized” in distributing government aid (“ayuda”), and vowed to block that mayor from personally giving the expected cash subsidy to his constituents. The Department of the Interior and Local Government (DILG) and the Department of Social Welfare and Development (DSWD) would instead carry on the task, said an irate Mr. Duterte.

The President apparently forgot that in last year’s lockdown, the DSWD had faced tremendous criticism and complaints from local government units (LGU) and lawmakers for unconscionable delays in distributing the cash aid, incomplete or inaccurate list of beneficiaries, list padding, and the lack of oversight that abetted corruption among many barangay officials.

Not content with threatening to withhold aid despite the hungry horde made jobless by yet another hard lockdown, Mr. Duterte also mocked the mayor for risqué pictures of him in his younger years (the President, unfiltered: “’Yan ang gusto ninyo? Ang training parang call boy. Naghuhubad, nagpi-picture naka-bikini tapos ’yung garter tinatanggal niya?”). Presidential spokesperson Harry Roque chose to be discreet for a change and refused to divulge the mayor’s identity, but the mention of sexy poses could only refer to Manila Mayor Isko Moreno, who had done racy roles in his early years in the movie industry.

First off: What in heaven’s name was the President doing looking at raunchy pictures of Moreno in the midst of the country’s runaway misery? And, since it’s safe to presume that Mr. Duterte does not google stuff by himself, who could have taken the effort to dig up the old photos and present them to him?

Why Moreno? Perhaps because the mayor has been doing well in presidential surveys, thus presenting a serious challenge to Mr. Duterte’s daughter, Davao City Mayor Sara, said to be the administration’s candidate for the top post despite her avowals (so far) that she’s not seeking it?

It could also be a case of plain retaliation. Last week, Moreno laid the blame for the chaotic rush to vaccination centers in several cities to “somebody’s” reckless statements threatening to bar unvaccinated citizens from leaving their homes or getting ayuda. Malacañang denied that it was Mr. Duterte’s pronouncements that had created the panicked response (the President is “the best communicator in the country today,” deadpanned Roque)—but Justice Secretary Menardo Guevarra conceded that there was a need to improve communication efforts regarding guidelines issued by the Inter-Agency Task Force for the Management of Emerging Infectious Diseases.

The catalogue of such confounding guidelines issued from on high is ever-growing as the pandemic has dragged on—from silly motorcycle barriers to flip-flops on travel requirements, quarantine levels, shops allowed to operate, curfews and restrictions on driving workers to their place of work, the overnight notice of lockdown on several cities, the banning of outdoor exercise, etc.

Through all these, hapless LGUs are expected to do the heavy lifting and be at the forefront of cushioning the impact of the national government’s lumbering pandemic response on confused, anxious citizens. But whenever a local executive stands out for an innovation or two meant to ease the suffering of constituents, Malacañang is quick to cut that presumed upstart down to size—e.g., Pasig City Mayor Vico Sotto, who was called out for allowing pedicabs to operate within his city when public transport was banned last year.

This time, it appears to be Moreno’s turn on the rack, publicly shamed by the President who, Roque claimed, was merely pointing out in his harangue Moreno’s “moral ascendancy” to lead. The President’s verbal abuse of Moreno came just days after the DILG served the mayor a show-cause order for his “inadequate” illegal drugs campaign in 2018. That memo was laughed off by netizens who pointed out that Moreno took office only a year later, in 2019. A red-faced DILG hastily withdrew the order. It also emerged that, in June, the DILG and the DSWD had in fact cited Moreno and the city of Manila for “the efficient and timely completion of the distribution of ayuda,” contrary to the President’s assertion.

The question of “moral ascendancy” doesn’t appear to apply in Moreno’s case, despite his raffish show-biz past. That benchmark should fall most rigorously on the President and his leadership, given the unprecedented trying times that have befallen the nation—and not only because of the pandemic.