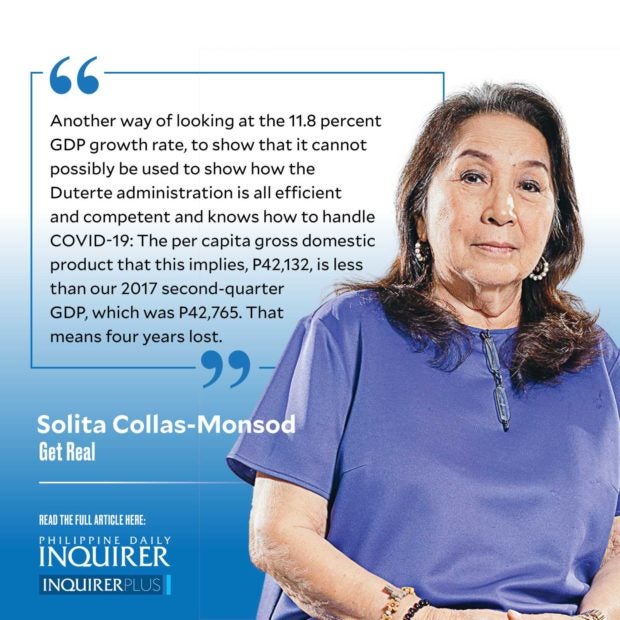 Is the 11.8 percent growth of GDP in the second quarter of 2021 an indication that the Duterte administration has managed the COVID-19 situation really well, and has achieved the correct balance between lives and livelihood? Because that’s what Socioeconomic Planning Secretary Karl Chua would have us believe.

The late Paeng Salas, arguably responsible for Marcos breaking the tradition that no Philippine president ever got reelected, would have called that “management by illusion,” referring to the way Marcos managed the country after he became dictator.

If you may remember, Reader, I have adverted to the GDP growth rate for the second quarter a couple of times in my columns. And it definitely had to be large and positive. Was I prescient? Not at all. It would happen, as night follows day, courtesy of the “base effect.”

What is that? To illustrate. That 11.8 percent GDP growth rate was computed, as is any growth rate, by subtracting from the GDP this period the GDP of last period, and then dividing by the GDP last period—g or growth rate of GDP = (GDPt – GDPt-1) / GDPt-1)—multiplied by 100 to give you the percentage.

The growth rate for the second quarter last year was particularly low because that GDP, instead of increasing, decreased by 17 percent. So the base became lower. Now comes this year’s second-quarter GDP. Subtract from it a much lower number, and then divide the difference by the base. And you get a very large growth rate. That’s the base effect. Which Secretary Chua essentially pooh-poohed, in practically the first sentence of his presentation, just so he could sell his version of why the large growth rate is due to the administration’s efficiency and competence.

But the truth, as always, will out. Very specific questions were asked, and Dennis Mapa, head of the Philippine Statistics Authority, answered very specifically.

Does that 11.8 percent growth rate, together with the first-quarter growth rate, mean that our GDP is now at least equal to the pre-pandemic numbers? Alas, no. And Mapa gave the figures as well as referred everyone to the published report in the website. The GDP for the first half of 2021 was P8.9 trillion, compared to P9.4 trillion for the same period in 2019. What was our GDP for the first half of 2018? That would be P8.9 trillion. Which essentially means that Filipinos, so far, have lost three years of GDP. Three years, and our GDP is the same as it was in 2018.

Another way of looking at the 11.8 percent GDP growth rate, to show that it cannot possibly be used to show how the Duterte administration is all efficient and competent and knows how to handle COVID-19: The per capita GDP that this implies, P42,132, is less than our 2017 second-quarter GDP, which was P42,765. That means four years lost.

Actually, the World Bank thinks that the Philippines will only achieve its pre-pandemic GDP by the end of 2022 (with the help of election expenses). Chew on that, Reader.One other thing. Mapa, during the briefing, pointed out that government final consumption expenditures had contracted by 4.9 percent. Well, that certainly tends to bolster what all the nongovernment analysts have been saying: that last year’s expenditures, which were certainly inadequate (see WB, IMF) for helping the poor, the marginalized, micro- and small businesses, and thus caused the largest economic contraction in this part of the world, have been reduced even more this year, or at least this second quarter. The “ayuda,” already inadequate, was cut some more. That is not the way to go.

But Chua at least had some very good news, although it had nothing to do with a statistical presentation on economic performance. He showed us what was sadly lacking in the presidential press briefings: a table showing exactly when the vaccines were coming. And based on his assumption that they could be administered at a rate of at least 700,000 jabs a day, the Philippines will have vaccinated 70 million people by the end of the year. I can only hope that he is right.