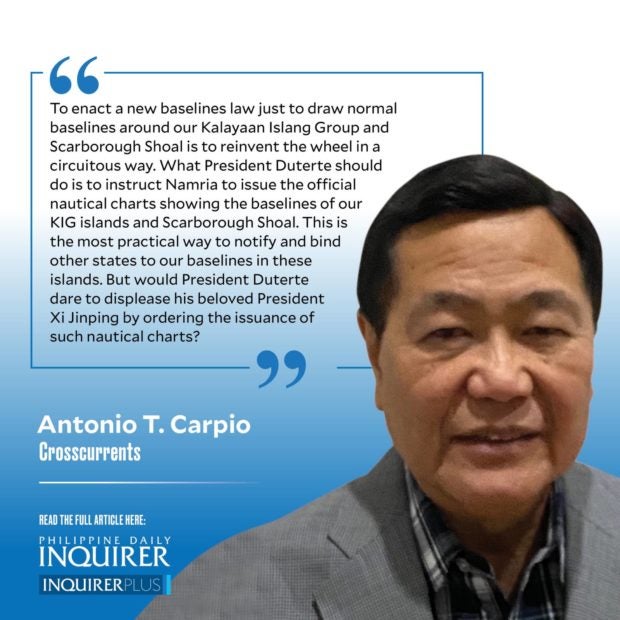 The Philippines has adopted two types of baselines from which its maritime zones — territorial sea, contiguous zone, exclusive economic zone, and extended continental shelf — are measured. These two baselines are the archipelagic baselines for the Philippine archipelago and the normal baselines for offshore islands under the Regime of Islands of the UN Convention on the Law of the Sea (Unclos). Republic Act No. 9522 delineates the segments of our archipelagic baselines, the distances between segments, their basepoints and geographical coordinates — all comprising the fundamental system for our archipelagic baselines. RA 9522 also identifies our two island territories that are governed by the Regime of Islands, namely the Kalayaan Island Group (KIG) and Scarborough Shoal.

Under the Charter of the National Mapping and Resource Information Agency (Namria), the agency is tasked to “produce the hydrographic and nautical charts vital to sea and water travel as well as the exploitation of our marine resources.” Namria is the proper government agency that should be making the nautical charts showing the normal baselines of the KIG islands and Scarborough Shoal. Unclos requires that these nautical charts should be duly published and deposited with the Secretary-General of the United Nations to bind all parties to Unclos. The drawing of normal baselines in nautical charts, including their official publication and deposit with the United Nations, is also part of customary international law and will bind even those few states that have not ratified Unclos, like the United States.

There is therefore no need to enact a new baselines law as proposed by retired Justice Francis Jardeleza and lawyers Romel Bagares and Melissa Loja just to enforce the Arbitral Award of July 12, 2016. A new baselines law enacted by Congress will not bind parties to Unclos and those that have not ratified Unclos. Foreign states will not recognize our domestic laws. What they will recognize are acts that implement customary international law, or acts that implement treaties or conventions to which they are parties. What will bind them will be the official issuance, publication, and deposit by the Philippine government of nautical charts showing our baselines in these islands.

To enact a new baselines law just to draw normal baselines around our KIG islands and Scarborough Shoal is to reinvent the wheel in a circuitous way. What President Duterte should do is to instruct Namria to issue the official nautical charts showing the baselines of our KIG islands and Scarborough Shoal. This is the most practical way to notify and bind other states to our baselines in these islands. But would President Duterte dare to displease his beloved President Xi Jinping by ordering the issuance of such nautical charts?