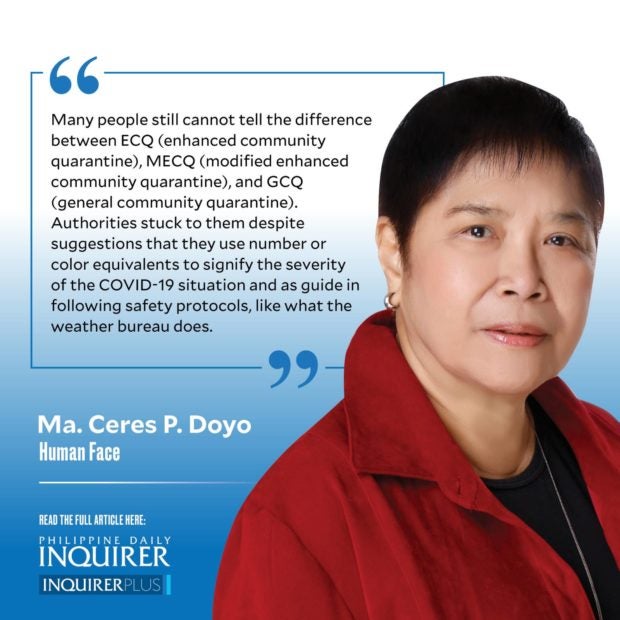 Although more than a year late, a meme came out recently on social media to spread humor while lessening people’s confusion and to make sense of the jumble of letters and acronyms that restrict our movements during these pandemic times.

To the humorist who reduced those big words into easy bits, whoever you are, you gave me my day’s dose of laughter, never mind the tummy ache.

Someone asked me what “granular” lockdown means. I replied, “Granular like the costly crushed dolomite that was used to enhance portions of Manila Bay.” By granular, I think they mean focused. So why not say focused?

This reminds me of a journalism rule on the use of short words (if possible) and clear and sharp sentences without sacrificing style. Novelist Kurt Vonnegut urges writers to “keep it simple,” showing that the longest word in Shakespeare’s profound “To be or not to be” is three letters long.

Editor Edward T. Thompson advises: Do not write, “The biota exhibited a one hundred percent mortality response” when you can write, “All the fish died.”

I may sound hyperbolic when I say that people are in perpetual state of perplexity because of conflicting orders, rules, and ordinances. Imagine people who do not know whom and what rules to follow even while coping with loss of income, COVID-19-stricken family members, and feeling that one is going bonkers.

“Can someone help me out of my confusion please?” someone asks on Facebook. “COVID is airborne. Infection happens in poorly ventilated indoor areas. So they ban outdoor exercises.”

Metro Manila Council Resolution No. 21-17 issued last Monday is “prohibiting outdoor exercise in the National Capital Region during the enhanced community quarantine until 20 August 2021 through the local government units of Metro Manila.” The resolution noted the “steady rise” in COVID-19 cases and cites the confirmed cases of the highly transmissible Delta variant.

It adds that while the Metro Manila Council “recognizes the need of the citizenry for various forms of exercise in order to promote and maintain physical, mental and emotional health,” the Council is also aware that remaining at home is “one of the best protections against the pandemic during ECQ.”

That is one example of saying one thing — that infection is more likely in enclosed spaces — and then negating it with another—that being outdoors, even for exercise, is not advised because of likely infection.

Such government advisories leave people in perpetual perplexity, confusion, or discombobulation. I like the onomatopoeic sound of the last one because nakakabobo naman talaga.

Take the case of the thousands who descended on vaccination sites in several Metro Manila cities (Manila, Las Piñas, and Antipolo) as early as 4 a.m. last Friday, the eve of the two-week ECQ from Aug. 6 to 20. When I saw a video of the crowd in Las Piñas, I thought I was seeing a traslacion of the Black Nazarene that draws millions of devotees every year. No, it was not a traslacion but a horrifying superspreader event that could have ended the lives of a few, not by the virus but by a stampede.

And so the finger-pointing began. Who made the remark that those who were not vaccinated would not get their ayuda or not be allowed to go out of their homes? Not President Duterte, his mouthpiece Harry Roque said. But there was a video clip to show the President did say it. This led to exchanges among parties that also sowed confusion among many. Who is calling the shots?

Meanwhile, most hospitals in Metro Manila (and other cities) are nearing full capacity, with several hospitals unable to take anymore COVID-19 patients, some of whom are given oxygen in their parked cars.

During this crisis, it behooves those in authority to weigh their words and communicate loudly and clearly. We do not need a latter-day Pied Piper who would lead the multitude to perdition.