On July 28, the Quezon City government announced that 82 of 161 policemen assigned to the Novaliches police station tested positive for COVID-19. This was harrowing news, as the infected cops account for more than 40 percent of the police station’s complement.

But what came out more shocking was when it was revealed later, by Quezon City Police District Director Brig. Gen. Antonio Yarra, that 51 of the COVID-19-positive cops were deployed to keep peace and order during President Duterte’s final State of the Nation Address (Sona) on July 26.

Wait, there’s more: The cops were deployed to Sona peacekeeping duties without the PNP (Philippine National Police) waiting for their COVID-19 test results.

According to Yarra, a total of 118 cops from Police Station 3 (Talipapa) were deployed to the Sona. They were subjected to swab tests on July 23, three days before the President’s final address at the House of Representatives in Batasan, Quezon City.

But somehow, the policemen were deployed even before their test results were known. The results came out on July 27 and 28, and of the 118 cops, “51 of them were tested positive,” according to Yara. 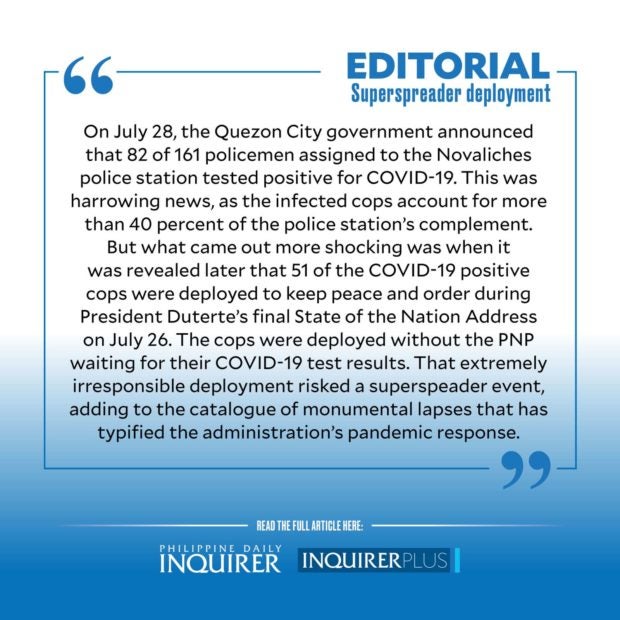 What were police officials thinking? Up to now, there has been no explanation for the blatant breach of health protocols by the very agency tasked with ensuring public compliance with critical safety measures. PNP chief Gen. Guillermo Eleazar relieved the station commander, Lt. Col. Cristine Tabdi “for command responsibility.” Was he the only one accountable for that dangerous gaffe?

The Quezon City government said a “joint investigation” with the QCPD showed that the COVID-19 positive cops (all of whom were fully vaccinated, by the way) had no interaction with the public during their deployment. That is simply hard to believe since they were, in Yarra’s words, scattered (“Kinalat natin ‘yan”) to different areas in the city for the day-long activity.

These cops also interacted with their colleagues and their families — while they were positive for the virus. Eleazar said 167 cops who were in close contact with the 82 COVID-19-positive policemen were already tested.

The extremely irresponsible deployment of police without COVID-19 test clearance risked a superspeader event, adding to the catalogue of monumental lapses that has typified the administration’s pandemic response, from the lack of protective gear and timely support for frontline medical workers at the start of the crisis in March 2020, to the inadequate aid for the millions rendered jobless by the world’s longest and repeated hard lockdowns and, now, the slow acquisition and rollout of vaccines.

At the current pace of vaccination, Bloomberg projects that it might take the Philippines 23 months or two years to cover 75 percent of the population. Thus, the Philippines is projected to be third to the last in the region to achieve herd immunity, just ahead of Vietnam and Myanmar.

Last week, the country’s biggest business groups, including presidential adviser for entrepreneurship Joey Concepcion, as well as the Philippine College of Physicians, backed a recommendation by the independent OCTA Research to impose a two-week lockdown this month to prevent a catastrophic surge of the deadly and more contagious Delta variant. But the Department of Health (DOH), once again proving to be the weakest link in the country’s fight against COVID-19, insisted there was “no definitive evidence” of a Delta surge. It warned OCTA, without naming it, against “making pronouncements that could cause fear and panic.” The DOH only acknowledged local transmission of the Delta variant on July 22, prompting the return of Metro Manila under GCQ with heightened restrictions from July 30 to Aug. 5.

As daily cases rose to 8,000 again, the IATF met on July 28 to discuss how to combat the highly transmissible variant. But the meeting devolved into a comedy of errors. Metro Manila Development Authority chair Benhur Abalos presented to the President the recommendation of Metro mayors to put the metropolis under a two-week hard lockdown if the government will provide cash aid or “ayuda” to the poorest sectors displaced from work. The problem was, according to Abalos: “Ang haba ko nag-present, wala palang volume na lumabas sa bibig ko.”

So nobody, not even Roque, told Abalos his mic was turned off? Nobody asked him to repeat what he was saying and the meeting just went on? Or maybe, after over a year of unending government ineptness, that was asking too much? Along with the PNP wantonly violating health protocols and putting the populace at risk by deploying COVID-19-positive cops, Malacañang’s bungling has become an altogether separate category of calamity.