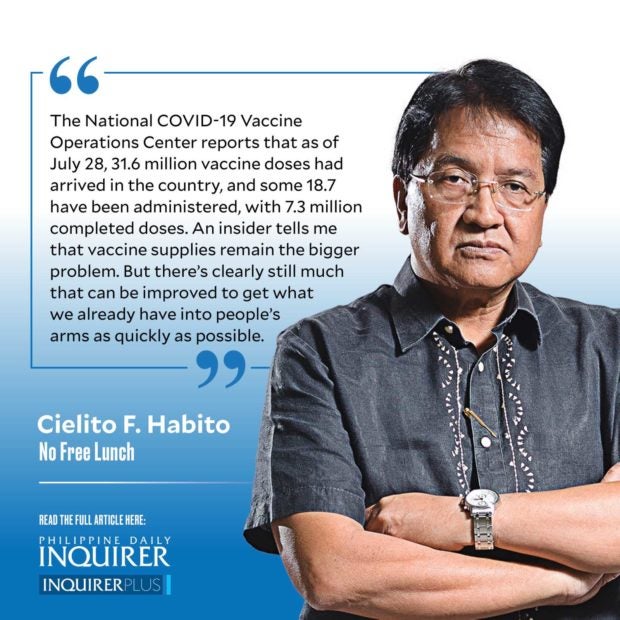 I recently got a sense of why our COVID-19 vaccine rollout hasn’t been as fast as it should and could be. We’ve even heard about unused vaccines about to expire in storage. Last weekend, four of our extended family’s workers went to the vaccination site in our municipality, having all received the much awaited text message from our local government unit (LGU) that they were due for their jabs. Some three hours later, they all came back empty-handed (or empty-armed?), annoyed and disappointed. After waiting and queuing for well over two hours, and passing the first three stations of the process, they were suddenly turned away at the fourth station when they indicated that they had no comorbidities. It’s not as if they had tried to misrepresent themselves as A3 (persons with comorbidities); they said they had all replied truthfully in the negative to the questions on comorbidities when they signed up.

My wife and I and friends in the A2 (seniors) category completed our second jabs weeks ago from our LGU, which appears to have moved on to younger and healthier people. We could tell so from the proliferation of Facebook posts of younger people proudly showing off their cotton-taped arms, posed against our town’s “Resbakuna” photo wall. Closer to home, our granddaughter’s twentysomething yaya, also perfectly healthy, was called ahead and already got her first Pfizer shot nearly two weeks ago, implying that their category was up. Understandably, then, the other four who went for theirs last Saturday came back quite annoyed over their time and effort wasted, not to mention the risk they exposed themselves to in a public place with a large number of people, all for nothing. They said many others were turned away and all they got was the lame excuse that the text messages they received was “a mistake.”

I called a councilor friend to ask how and with whom I could file a complaint on behalf of our staff. He, too, was angered to hear of our worker’s experience, promising to look into the matter and determine accountability. He shared my view that inasmuch as the people were already there—on instructions of the LGU at that—and had already patiently queued and gone through three stations, they shouldn’t have been turned away at this time that rapid vaccine rollout is everyone’s concern. He added that they were actually resorting to “bribing” citizens to take the vaccine, making it senseless to turn people away.

Later, he phoned to relay the explanation he got from our municipal health officer (MHO): The Department of Health had instructed that those with comorbidities “were to be prioritized” for the Janssen vaccines that they had been using, and “there was a DOH representative watching them that day.” He admitted that a lot of people got angry with them that day. Still, I maintain that prioritizing need not mean suddenly excluding others, especially if they had already been asked to come.

The incident raises a number of questions. Why didn’t they promptly inform people upon arrival that they were going to exclude those without comorbidities? Why did they even exclude them at all, when enough vaccines are presumably already allocated for all who were told to come? Whether it was the DOH person or the MHO who was to blame is not important. I heard a DOH official say on TV that “prioritizing” means LGUs are being urged to find creative ways to deliver the vaccines to the still unvaccinated A2s and A3s (like visiting them in their localities, even homes, perhaps?). But to suddenly turn back A4s, A5s, and others after already calling them in is unfair, to say the least, and borders on cruelty.

The National COVID-19 Vaccine Operations Center reports that as of July 28, 31.6 million vaccine doses had arrived in the country, and some 18.7 have been administered, with 7.3 million completed doses. Assuming some 11.4 million are earmarked for second doses, this leaves 1.5 million still to be administered, and vaccine arrivals are picking up. An insider tells me that vaccine supplies remain the bigger problem. But there’s clearly still much that can be improved to get what we already have into people’s arms as quickly as possible.