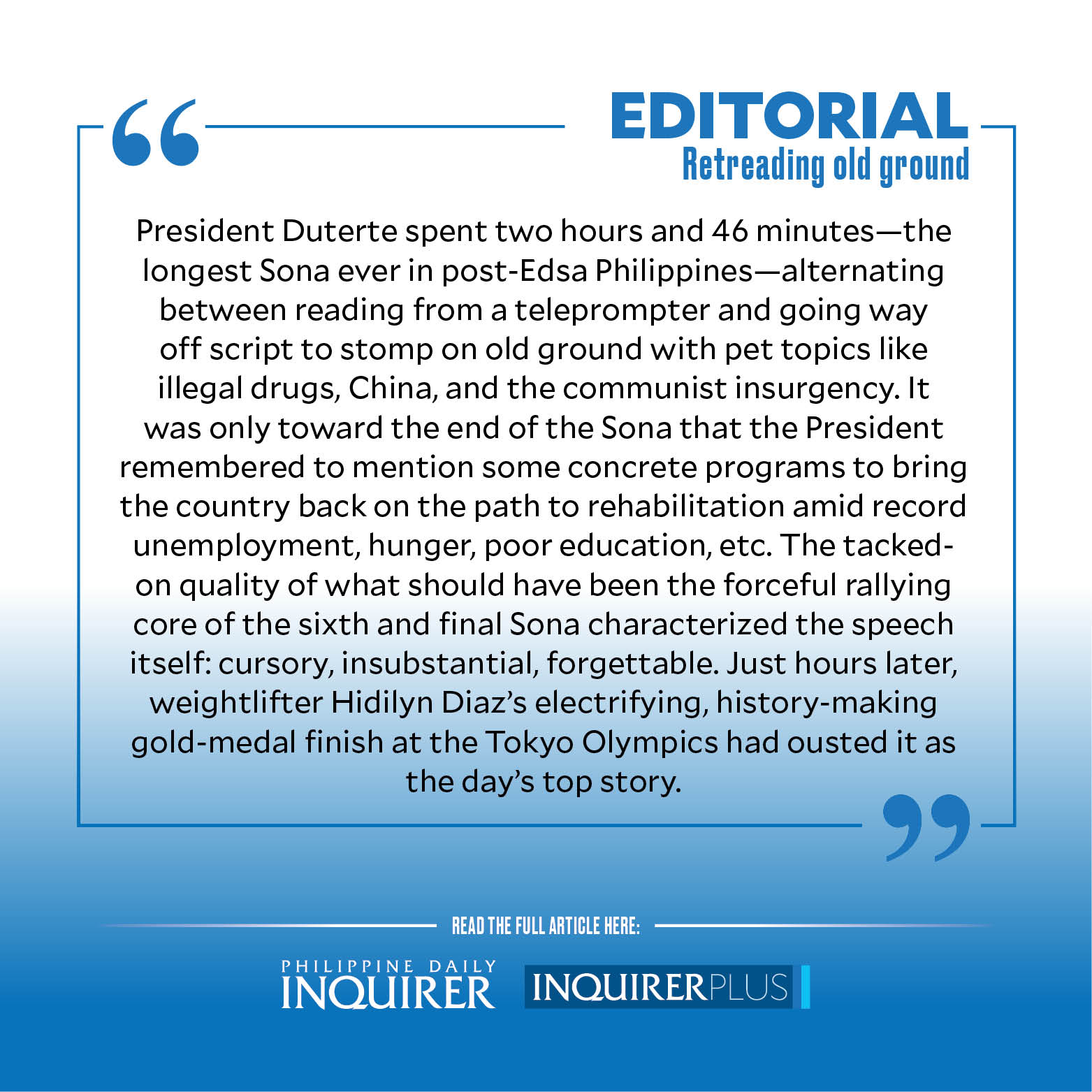 In the lead-up to President Duterte’s State of the Nation Address (Sona) on Monday, Presidential Communications Secretary Martin Andanar promised that the speech would be “etched in the hearts and minds of the Filipino people.”

By the end of the Sona, it was etched instead as, disappointingly, yet another retread of the President’s tropes, without the most important message of all: a detailed roadmap the Duterte administration will take in its final year to deal with the uncontained COVID-19 pandemic that has inflicted immense suffering on Filipinos and left the economy in tatters.

Mr. Duterte spent two hours and 46 minutes—the longest Sona ever in post-Edsa Philippines—alternating between reading from a teleprompter and going way off script to stomp on old ground with pet topics like illegal drugs, China, and the communist insurgency. Public health expert Dr. Tony Leachon summed up the sentiments of many when he tweeted in exasperation: “We have suffered too much for 16 months with this pandemic. We deserve to know the roadmap to end the pandemic. We live and die with the execution of the revised plan of action brought about by the highly transmissible and deadly Delta variant.” But, he lamented, President Duterte’s last Sona “did NOT inform, did NOT influence, did NOT inspire.”

At one point in his speech, Mr. Duterte offered a bit of introspection: “The past five years have been challenging and humbling. I stand here bearing no conceit, but if there is one thing that I could be proud of, not once did I waver in doing the unpopular.”

Was that an acknowledgment, however grudging, that perhaps his administration had had its lapses and mistakes, that perhaps here in the twilight of his tenure he could finally let go of the reflex bluster and bellow that have defined his presidency and speak to the Filipino people in more measured, comforting terms?

No, and no. Mr. Duterte dredged up old hurts by rehashing already debunked claims against shuttered media network ABS-CBN. He expounded on topics of precious little consequence such as the continued replenishment of dolomite on a small patch along Manila Bay (days before his Sona, that project that has by now cost millions of pesos saw most of the sand washed away to the sea by torrential rains and the rest overran with garbage). He recalled the return of the Balangiga Bells of Eastern Samar. He made the bold claim that “We have taken away the misery of public commuting”—an assertion easily belied by recent pictures of hapless commuters stuck in queues waiting for scarce public transport.

On illegal drugs, which were allegedly being imported by corrupt generals, the President repeated his threat that he will “kill” those who will “destroy my country.” It was a battle that he nevertheless admitted he was actually “losing,” along with the fight against corruption (“Nobody can stop corruption”).

On the insurgency, Mr. Duterte ordered Sen. Ronald dela Rosa, former police chief and enforcer of his “war on drugs,” to look for an alleged illegal importer of firearms among the police and “shoot them dead” because the guns had supposedly ended up with communist rebels. It was a taunt at the International Criminal Court, which has started the process of possibly investigating the administration for the bloody drug war. “Anyway, you are already charged in the ICC together with me. So what is the problem of adding another one?” he told Dela Rosa.

On China, he disclosed that it was his “good friend” Chinese President Xi Jinping whom he first called for help when the pandemic struck the Philippines in March last year. (Left unsaid: The delay in enforcing the travel ban on China was what experts believe led to the explosion of COVID-19 cases in the country.) As for the Arbitral Award the Philippines had won over Beijing, Mr. Duterte had no qualms repeating the Chinese position: “There was really no arbitration at all because it was only the Philippine side who was heard.”

It was only toward the end of the Sona that the President remembered to mention some concrete programs to bring the country back on the path to rehabilitation amid record unemployment, hunger, poor education, etc. These included the formation of a task force that will shepherd the National Employment Recovery Strategy by, among others, vaccinating economic frontliners and retooling workers; and a plea to Congress to pass economic measures such as amendments to the Foreign Investments Act, the Public Service Act, and the Retail Trade Liberalization Act.

The tacked-on quality of what should have been the forceful rallying core of the sixth and final Sona characterized the speech itself: cursory, insubstantial, forgettable. Just hours later, weightlifter Hidilyn Diaz’s electrifying, history-making gold-medal finish at the Tokyo Olympics had ousted it as the day’s top story.