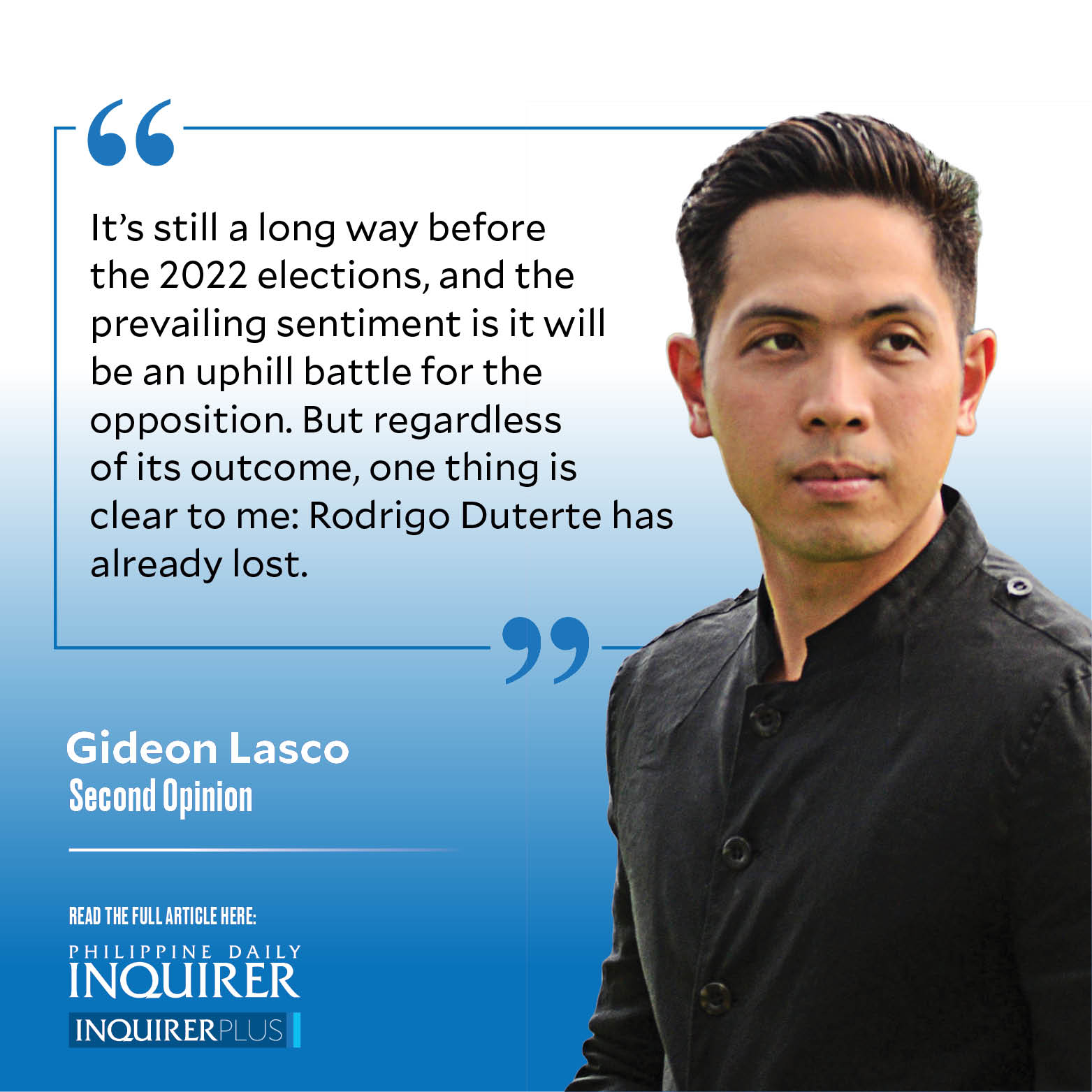 It’s still a long way before the 2022 elections, and the prevailing sentiment is it will be an uphill battle for the opposition. But regardless of its outcome, one thing is clear to me: President Rodrigo Duterte has already lost.

President Duterte has already lost because he has failed in his most nefarious goals. Sen. Leila de Lima is jailed but not silenced; Maria Ressa is indicted but unbowed; ABS-CBN is off the air but still online. Despite his attempts to marginalize her, Vice President Leni Robredo is still standing, and even leading the nation during the pandemic in his stead. And despite pushing for charter change, federalism, or nationwide martial law, he has failed in his attempts to stay in power unlike his idols Vladimir Putin and Xi Jinping—likely rebuffed by key actors unwilling to participate in his tyrannical moves.

Even his clenched fist has now been transformed—thanks to artists like Kevin Eric Raymundo—into a symbol of defiance.

Another reason why he has already lost is that, as his State of the Nation Address—hollow and rehashed—has made clear, he has failed the Filipino people in his promise of change, and of doing things in a better, more inclusive, unifying, empathetic way as compared to his predecessors. He won the presidency by painting P-Noy as a demon, but all that he’s managed to do is to make him look like a saint. Far from ending corruption, he has embraced some of our most corrupt politicians. Far from defending the country, he has surrendered our pride if not our patrimony. Far from ending criminality, he has become the very embodiment of it with his genocidal drug war and equally violent campaign against activists.

Fake news no longer works as well in 2021 as it did in 2016; the same can be said of the President’s now-comedic “I will solve so-and-so in 3–6 months.” Surely, like all administrations, the current one can point to some accomplishments. But it is the dolomite beach in Manila Bay that symbolizes much of what it has done for the country: superficial, unnecessary, arbitrary, and wasteful.

Finally, and perhaps most crucially, Mr. Duterte has also lost because, no matter what position he runs for after his term, justice is running after him. He pulled the country out of the International Criminal Court, but it did not stop the process. He is planning to run for VP, but neither would that suffice to block his ultimate prosecution—if not in the courts, then in the historical record. He has declared that he will refuse to cooperate, but his noncooperation will only make him look like a fugitive, especially since “if you have nothing to hide, you have nothing fear” has been one of the mantras of his police state.

This narrative of Duterte the loser—at this point more of a provocation than a prediction—is, of course, hard to recognize, given that his ability to wreak havoc remains fully intact, and his decisions continue to shape people’s everyday lives especially during the pandemic, during which he has had the final say on where people can travel and whether they should wear face shields. And of course, he may yet attempt a bolder bid to stay in power, knowing what electoral defeat will spell not just for himself but for every Bong, Dick, and Harry that has enabled his regime.

But we cannot give him too much credit, let alone the air of inevitability in 2022 and beyond. Being in Malacañang for five years may have made him feel all powerful, but he is far from being an omniscient Emperor Palpatine. Indeed, this is a man with finite powers, and like all other politicians, especially those who have failed in their promises, his popularity will slowly but surely fade away—if not already. The fact that even his former henchmen are now standing up to him, the fact that surveys put him at a mere 18 percent in vice presidential preference, the fact that Hidilyn Diaz’s historic gold was not even necessary to render his Sona irrelevant—all these mean there’s a big (and growing) part of the country that’s desirous of change.

All of these should give us courage and hope to challenge him, and certainly, not to give up on our country and on promising candidates in the coming elections—and for those prospective candidates in turn not to lose hope in their own chances.

President Duterte has already lost—and we as begin the long and painful process of moving past him, the real challenge is how our nation can win amid the damage he has done and the deeper, structural problems he has failed to address.