He to the loo, she to the gold | Inquirer Opinion
Close
menu
search

He to the loo, she to the gold 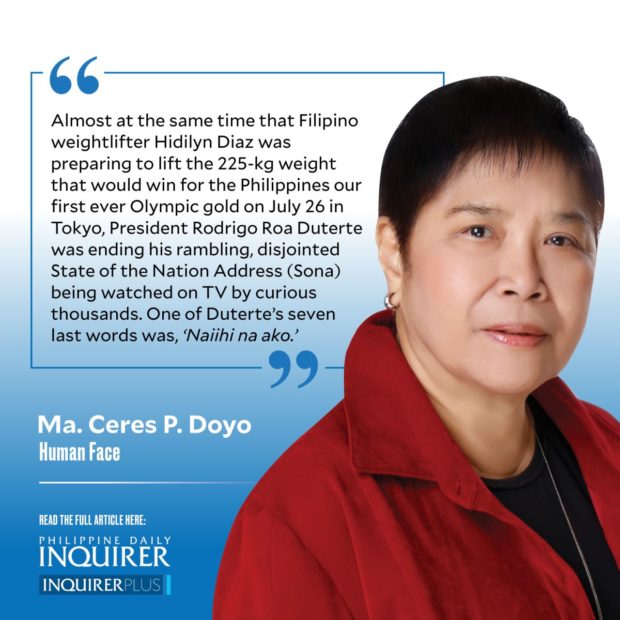 Almost at the same time that Filipino weightlifter Hidilyn Diaz was preparing to lift the 224-kg weight that would win for the Philippines our first ever Olympic gold on July 26 in Tokyo, President Rodrigo Roa Duterte was ending his rambling, disjointed State of the Nation Address (Sona) being watched on TV by curious thousands. One of Duterte’s seven last words was, “Naiihi na ako.” No euphemisms for his urgent announcement and by-your-leave. What he said literally translates into “I now want to urinate.”

And then he mumbled to his giggling fans in the audience something about biological processes or something. I could imagine the dean of the diplomatic corps present, Apostolic Nuncio Charles John Brown, trying to keep a straight face or mumbling in Greek, Kyrie eleison.

That folks, was how Duterte’s sixth and last Sona, almost three grinding hours of it, ended.

Moments later, I received a message from a colleague who had access to a cable sports channel (nada in Skycable) saying that Hidilyn won the gold. By then, the wobbly President, escorted by his carers, was on his way out, on his way to the loo to relieve himself. There he must have again wondered aloud, as he did twice during his Sona while feeling himself, if he was all right and still there. No ill wishes, but I thought he would topple over from the podium.

The next day all national broadsheets had Hidilyn’s photo on the front page, with the news about the President’s lackluster Sona relegated below the fold or, in the case of the Inquirer, a teaser on the upper right ear: “Duterte taunts ICC, orders more kills.” The banner headline, all caps: “Heavy load lifted: Diaz wins 1st PH Olympic gold.”

I thought the Inquirer’s front page layout was the best of all. Above the fold was the Reuters photo of Hidilyn against a blazing red background with the Olympic rings logo, with the barbell coming down at chest level where the word Philippines on her shirt was, her mouth agape for a victory scream.

Hidilyn’s physical and metaphorical triumph against her closest rival (from China, despoiler and grabber of Philippine territories) all but wiped out the memory of a Sona littered with ad libs that strayed away from the speech on the teleprompter that could have presented (if the President stuck to it) in an intelligible manner what he thought his administration has accomplished in the last five years, and hopes to accomplish in the remaining 12 months while we wallow in the pandemia. Believe it or not, of course.

Instead he was at it again ad nauseam, ad infinitum—the “kill” orders against drug peddlers for love of his “my country” as if it were solely his own, young innocent lives be damned while the big fish are let off the hook.

He preferred to ramble on his own and zeroed in on the communist insurgency, still operating after more than 50 years, and other so-called destabilizers of his administration. I mention that because, with Hidilyn’s gold, Duterte better remember: A couple of years ago, his “intelligence” experts came up with a matrix of “destabilizers” presented by one of his trying-hard apologists, Salvador Panelo. If that matrix was a product of military intelligence, then it gave credence to the saying that military intelligence is a contradiction in terms, an oxymoron.

The matrix included, of all people, 2016 Olympic silver medalist Hidilyn Diaz, an Air Force sergeant, who was busy pumping iron to prepare for the 2020 Olympics (postponed to 2021). What a bashing on social media Hidilyn got then from mean-spirited Duterte trolls. “What matrix?” the incredulous Hidilyn asked. “Ano yun?” How did she end up there?

While writing this, I received a picture of a creature lying flat on its back with a barbell weighing it down on the neck. It has a note which says so-and-so wants to do a Hidilyn. A comeuppance for the ones who unjustly maligned her.

Hidilyn, you brought joy and lifted weight off the back of this woebegone country. Salamat.