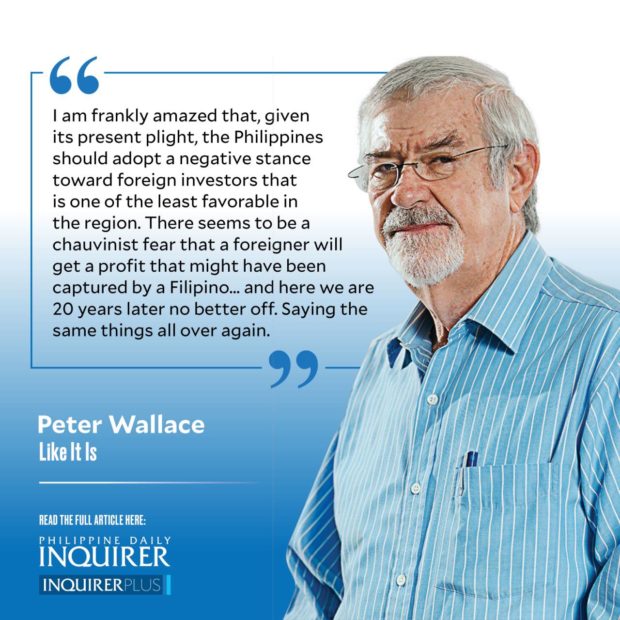 What I’m going to do today is publish a speech I gave 20 years ago. Has anything changed? Is it any wonder why I get discouraged sometimes?

Whenever someone asks me to pontificate on the Philippines, I feel irritatingly at a loss. I would like to point to clear blue skies ahead, a future of social stability, economic prosperity, and political peace. But, as anyone of you here know only too well, that is the kind of daydreaming that might embarrass even confirmed optimists like Bernie Villegas.

Most people, including me, wish the Philippines well — after all, its people are possibly the nicest in Asia, or indeed anywhere… They deserve better than to live in their present squalor… But the truth is, optimism is pretty hard to justify. My view is that the Philippines will have to work very hard to become what Mrs. Aquino calls Asia’s next NIC.

I am not predicting it will collapse from exhaustion, but I seriously question whether it has the energy to get anywhere near that finishing line by the end of this century.

The fact is that the reality of the post-second world war, the situation in the Philippines is one of endemic corruption and theft.

I would argue that the lasting tragedy of the Marcos era is not its corruption or abuse of human rights. Instead, it is the way the regime allowed the scales of regional advantage to tip against the nation. In the 1950’s, the Philippines was the richest country, on a GDP per person basis, in Southeast Asia. By the 1970’s it was the last of the bunch.

The reasons for this decline are fairly obvious. First, by pursuing an import-substitution policy, the country failed to promote competitive export-oriented industries. Second, the country failed to increase agricultural productivity. Add to that the population explosion—from about 38 million Filipinos when Marcos came to power in 1965 to around 56 million by the time he was kicked out—you get a recipe for economic catastrophe.

Clearly, if the Philippines is to achieve its targeted growth of 6.5 percent a year for the next five years, it has to find more money. The additional amount can come in two forms—from official overseas aid, and from private foreign investors.

I am frankly amazed that, given its present plight, the Philippines should adopt a negative stance toward foreign investors that is one of the least favorable in the region. There seems to be a chauvinist fear that a foreigner will get a profit that might have been captured by a Filipino.

In my opinion, smart steering by Mrs. Aquino’s government must mean the following:

Second. The provision as a matter of urgency of a decent national infrastructure. Quite apart from official donor assistance, the Philippines should involve the private sector.

Third. A renewed emphasis on education, especially in English. One of the few advantages the Philippines can claim is a literate workforce reasonably competent in English—but all the evidence suggests the competence is falling fast.

Fourth. The devolution of administrative power away from the center. It was Marcos who centralized politics and power in the Philippines, and that centralization is a recipe for massive corruption and bureaucratic inefficiency.

Fifth. A continuing fight against corruption. Corruption in the Philippines is never going to be eradicated. But the efforts of people like Miriam Defensor Santiago are important signals to both Filipinos and foreigners.

Sixth. A proper effort at law enforcement—which means enforcing penalties as well as decreeing them.

Seventh. An attempt to restrain a population growth rate that is presently around 2.4 percent a year.

Maybe all that is a tall order for the present regime. But it is nonetheless feasible, and if carried out it would give the new president in 1992 a decent chance of fulfilling Mrs. Aquino’s idea that the Philippines is the next NIC.

Well, there it is, and here we are 20 years later no better off. Saying the same things all over again.

These are heavily redacted (to fit this column) excerpts from a column published in 2008 from a speech I gave in 1986! That’s 35 years ago, and most of it could be given again today.

TAGS: foreign investors, Like It Is, Peter Wallace, PH as NIC, PH economy