‘But not yet a surge’ | Inquirer Opinion
Close
menu
search

‘But not yet a surge’

Hidilyn Diaz lifted our collective spirit, but things look grim with the local transmission of COVID-19’s Delta variant confirmed and the number of infections inexorably rising. By way of emphasizing the gravity of the situation, infectious disease expert Dr. Anna Lisa Ong Lim was quoted as saying on Saturday that every detected case should be deemed a Delta case so as to ensure implementation of strict border control and efficient disease surveillance.

Lim described border control as “a very critical component” of the government’s response to the pandemic and, along with disease surveillance through genome sequencing, an instrument that would enable experts to “keep one step ahead.” But how to balance border control with the renewed push for local tourism?

On Friday, Health Undersecretary Maria Rosario Vergeire said the Department of Health (DOH) was assuming breached border control protocols with the confirmation of the Delta variant’s local transmission. She said all ports of entry nationwide should implement these protocols “strictly and uniformly” — a point that should by now go without saying yet still requires constant repetition. She added, however, that infections in arriving travelers might have gotten past RT-PCR tests. Reality check: The reputed “gold standard” in tracking COVID-19 infections is not 100-percent failsafe and also requires proper health monitoring and assessment. 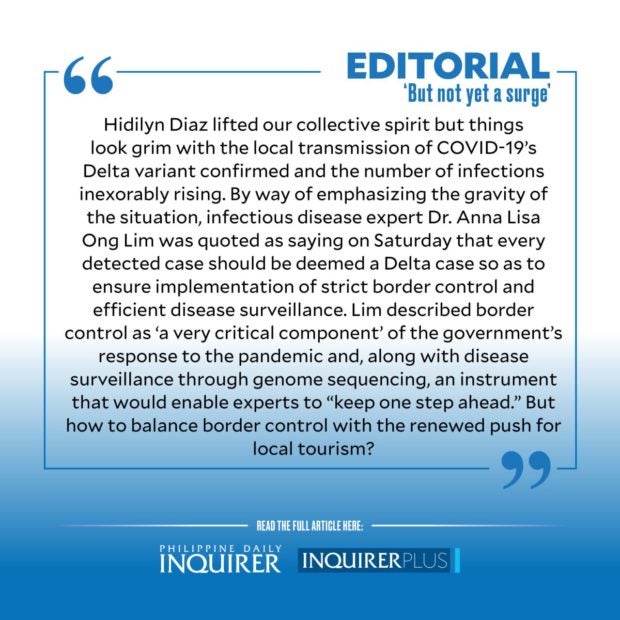 The rise in infections caused by the highly transmissible Delta variant is truly worrying. Other countries, even the developed ones, are fighting soaring numbers of infection; lockdowns are again in place when freedom from face masks was celebrated only recently. In Australia, citizens have taken to the streets of Sydney, Melbourne, and Adelaide to protest restrictions on their mobility.

In these parts, the figures daily announced by the DOH are on the whole estimates, with a number of labs unable to submit their respective results on any given day. It’s also a given that a number of infections, whether they end in recovery or death, will be unregistered. Nevertheless, the official numbers have breached the 1.5-million mark, and 119 Delta cases, of whom four have died, have been recorded as of this writing.

That the Delta-positive do not exhibit the common COVID-19 symptoms makes disease surveillance more difficult. The scarcity of genome sequencing machines also hobbles the government’s pandemic response. The experience of a returning overseas Filipino worker, as narrated by Quezon City’s Epidemiology and Surveillance Disease Unit (Cesu), illustrates the limitations of testing and contact tracing efforts.

The man, 34, flew in from Saudi Arabia on June 24 and stayed in a Makati hotel for mandatory quarantine. He noted a slightly itchy throat on June 28 and was administered a swab test on June 30. He tested positive and was moved to a hotel in Manila on July 4. He was considered recovered and allowed to go home to his family on July 11. But his sequenced sample that found him positive of the Delta variant was turned over to the Cesu only on the evening of July 25. He and family members were swabbed the next day and put on strict quarantine.

According to Cesu head Dr. Rolly Cruz, the man and his family will be swabbed anew as part of the protocol “even if he is considered a recovered patient.” Extensive contact tracing is supposedly being done—but can one be blamed for thinking it’s a catch-up effort?

A similar occurrence made up the gist of Manila Mayor Francisco “Isko Moreno” Domagoso’s recent lament: the length of time it took the DOH to inform the city government of a 33-year-old Delta-positive patient at a public hospital. “Hopefully,” the mayor said late last week, “it would not take a month for the local government to be informed, so that what should be done can be done.”

On Monday, Vergeire said Metro Manila and five other regions — Cagayan Valley, Central Luzon, Calabarzon, Central Visayas, and Northern Mindanao — have been showing “trend reversals,” or an increase in infection rates, in the past two weeks, and the Ilocos and the Cordillera Administrative Region in the past six weeks. But no way, she said, should the word “surge” be used in reporting on the marked increase in cases (which, it is bruited about, prompted an emergency meeting of the pandemic team at this late stage). What the government can “verify” is that the numbers are increasing, she said.

Precise language is fine, but it’s unclear if it comforts those forced to stand in line in a flood to get vaccinated, or those anxious about the efficacy of the jab they received against Delta and other variants — or those simply unsure if the government truly has their back.