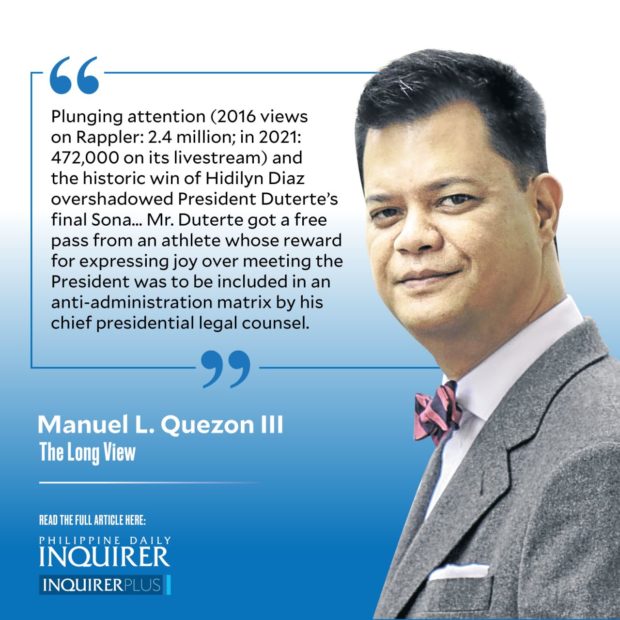 The State of the Nation Address (Sona), besides being a requirement, is supposed to achieve two things. It’s supposed to highlight what the administration has done over the past year, and justify the money the President will ask Congress to enact as the national budget for the coming fiscal year. A President’s final Sona is meant to sum up the past five years and make a pitch for the public to support the President’s anointed candidate in the next election; what it puts forward by way of the proposed budget is less important; the election year budget, after all, was passed the year before. In other words, the current budget is the election budget; what the President will submit to Congress soon is merely to tide the government over from the transition of the current regime to the next.

The President had three things to achieve, going into his last Sona. To keep himself from becoming an irrevocable lame duck, he has to dangle himself as a potential vice-presidential candidate, while not totally discounting the possibility (though not necessarily greater probability) of his daughter seeking the presidency. In other words, first he had to show he still has what it takes to be a viable candidate or campaign for one. Second, he had to demonstrate he can still inspire the devotion to fuel his or his daughter’s candidacy. Third, he had to show he has a winning pitch to make to the electorate, enough to put rivals on notice they will lose.

This is what we got instead. Alarming visuals of his stumbling upon alighting from the presidential chopper and after bowing to the audience in the Batasan’s session hall—a far cry from the brisk walk and vigorous demeanor of his first Sona in 2016 (followed by complaining of shortness of breath near the end of his remarks). Joking galore, except the applause seemed automatic, so much so that he complained more than once about it, most indignantly when he scolded Congress for their applauding over his announcement that he had to go to the bathroom. “May asim pa” moments these were not. In praising the Senate President—“with due respect to the Senate President, he is a good man, he can become a good vice president. He is holy. Ngayon hindi na siya nahuhuli, noon huling-huli siya”—there was a flash of the old Duterte, leaving you guessing if his compliment was disguising a threat.

But the overall impression, whichever way you look at it, is that the presidency has taken its toll on the vigor of the President. He remains strong enough to make three things crystal clear, in fact passionately so. First, in foreign policy, he recited what the foreign affairs department wanted, only to tear it to pieces in his ad libs rejecting the entire framework of the government on the arbitral ruling and our mutual defense treaty. In other words: the words and actions of our diplomats were rendered worthless. Second, he remains defiant in his so-called “war on drugs” and the way it’s been waged: it remains the fuel for his fire, and one suspects, the core of his pitch to voters. Last of all, while his administration made “a comfortable life for all,” the core of its communications, the President himself, gave it short shrift—the pandemic killed that initiative, and when it came to things like a 10-year validity for driver’s license, the President announced it, then proceeded to spend several minutes explaining why he feels it’s a bad idea.

Perhaps the most momentous thing about the speech, aside from torpedoing the Departments of Foreign Affairs and National Defense, was this: “I would like to renew my call to Congress to immediately pass the amendments of priority legislative measures such as the Foreign Investments Act, the Public Service Act, and the Retail Trade Liberalization Act.” Possible code for amending the economic provisions of the Constitution by means of ordinary legislation. Luckily for the President, plunging attention (2016 views on Rappler: 2.4 million; in 2021: 484, 426 as of Tuesday afternoon) and the historic win of Hidilyn Diaz overshadowed the President’s final report. In politics, luck is as important as any act of commission or omission. Mr. Duterte got a free pass from an athlete whose reward for expressing joy over meeting the President was to be included in an anti-administration matrix by his chief presidential legal counsel.