The state of the people | Inquirer Opinion
Close
menu
search

The state of the people 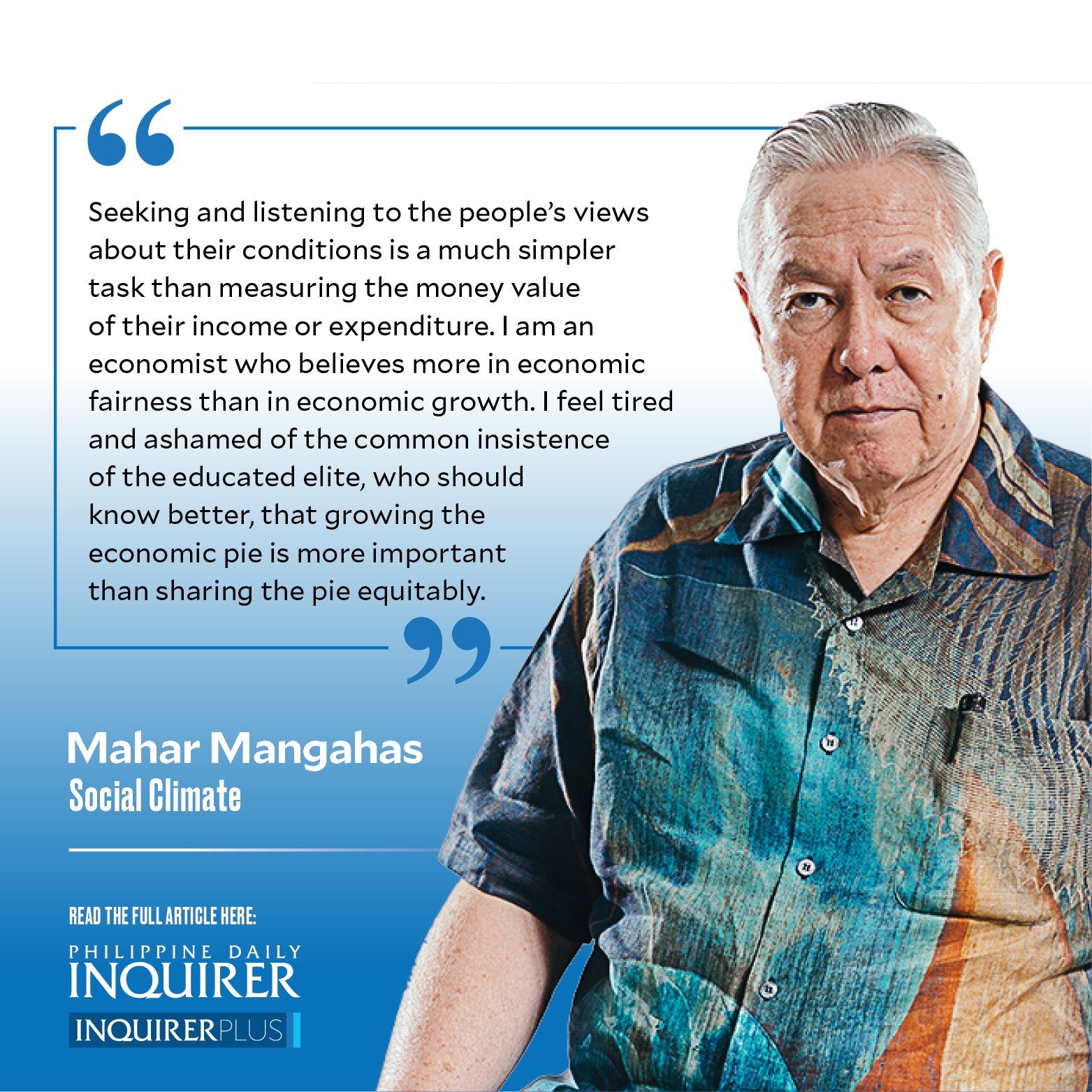 On July 26th, the President is scheduled to give his sixth State of the Nation Address (Sona), the country’s present situation from his point of view, and, perhaps, what he plans to do about it in his final year.

The social surveys done by Social Weather Stations provide a regular flow of data about how the Filipino people are faring in certain dimensions of their lives, from their own points of view. SWS never offered these data to any of the past six presidents; but some Sonas have cited the data.

The original data are the subjective views of survey respondents, but the manner of collecting them is objective and scientific. Multiple scientific surveys are welcome; then results can be compared.

When it comes to their own personal, or their own family’s, Quality of Life (QOL), the people themselves are the most knowledgeable, and the most reliable. Seeking and listening to the people’s views about their conditions is a much simpler task than measuring the money value of their income or expenditure.

I am an economist who believes more in economic fairness than in economic growth. I feel tired and ashamed of the common insistence of the educated elite, who should know better, that growing the economic pie is more important than sharing the pie equitably. I think those at the bottom deserve more attention than those in the middle of the economic spectrum (“Economic suffering stays intense,” 7/17/21).

The SWS strategy for focusing more attention on the bottom is to measure deprivation just as rapidly as the gross national product. The Social Weather Surveys are deliberately done quarterly, to match the frequency of GNP reporting. This has made the SWS poverty and hunger statistics the most rapid in the world. They show that economic deprivation fluctuates significantly, both upwards and downwards. These fluctuations are unrelated to the GNP growth rates conventionally used to describe the state of the nation.

It is only recently, in 2014-19, that gainers, i.e., those whose QOL bettered in the past year, exceeded losers, those whose QOL worsened. This is despite the fact that GNP almost always grew faster than the population prior to 2020. The people’s personal optimism and pessimism, or their sense of whether their QOL will rise or fall in the coming year, as seen by the surveys, has adjusted accordingly.

Then, in 2020-21, the people’s economic wellbeing collapsed. Joblessness according to SWS became catastrophic; this is unseen by official unemployment, since a mere 1 hour a week of paid work is enough to be officially “employed.” The suffering is so much greater than the numbers infected by COVID-19 that I blame much of it on exaggerated government restrictions on work.

The SWS quarterly surveys cover victimization by crime, by asking if respondents have been burglarized, been robbed outdoors, suffered from violence, or lost a motor vehicle to thieves. They cover the sense of public safety, by asking if respondents are fearful of home break-in, if the neighborhood is safe for walking at night, and if drug addicts are nearby. Over the decades, these conditions have hardly changed. The people do notice fewer drug addicts recently, but are nevertheless appalled by the bloodiness of the administration’s “war on drugs”.

Whereas surveys can also generate data on the people’s satisfaction with governance, this is not SWS’ prime mission. It is indeed important, in a democracy, that the people trust basic institutions like the legislature, the courts, the police, the schools, and the hospitals. But one should be very careful not to mistake politicians’ personal popularity for either sincerity or competence.