If not Leni, then who? | Inquirer Opinion
Close
menu
search

If not Leni, then who? 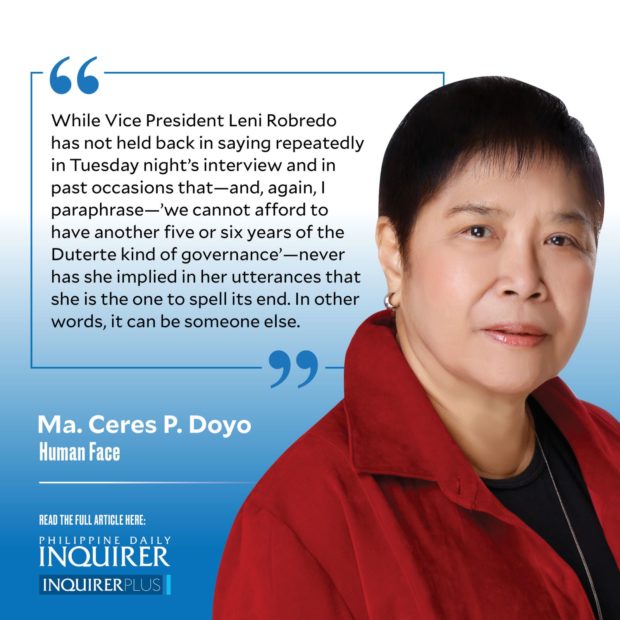 The question in my mind as the one-hour interview with Vice President Leni Robredo in ANC’s “After the Fact” hosted by Christian Esguerra drew to a close was: If not you, Leni, then who?

My question’s context is 1Sambayan’s search for presidential and vice presidential wannabes (and for the senatorial lineup as well) that 1Sambayan will choose from and finally endorse. Aspirants should be willing to go through a vetting process, fit into 1Sambayan’s vision, and abide by its decision on who to finally endorse. These chosen ones would be opposition standard-bearers who can spell the end of the Duterte reign. To use techie language, do a reboot.

So far, only Sen. Antonio Trillanes IV has made known his desire to be included in 1Sambayan’s selection process. Robredo is still mum. I hate to use the phrases “hemming and hawing” and “playing it coy” as these make her look indecisive. Only she and her close-ins know the right time for her to say yes or no.

Cool and collected, Esguerra (a former Inquirer reporter, by the way) kept pressing Robredo to reveal what was in the cards she was holding close to her chest. But something else was quite revealing, and that was Robredo’s question toward the end of the interview, to paraphrase: What good would it do if I run? Her question begs an answer.

Did she mean winning or did she mean governing? Let me jump the gun by tossing to her my own counter question: What good would it do if you DO NOT run? As to governing—there is such a thing, in spiritual parlance, as “the grace of office.” But I am getting ahead of the situation.

While Robredo has not held back in saying repeatedly in Tuesday night’s interview and in past occasions that—and, again, I paraphrase—“we cannot afford to have another five or six years of the Duterte kind of governance”—never has she implied in her utterances that she is the one to spell its end. In other words, it can be someone else.

But the goal is, first, to win against. Must she be the one to run and win the race? That is the gist of her questioning, short of asking, “But why me?”

But why not you? is the counter question. Robredo is begging to hear loud and clear the answer—it must be you. Like the lyrics in the Stephen Bishop song. But more importantly, why. As to the how, well, her two past wins as Jesse’s widow, first as congresswoman, then as VP, were short of miraculous. The charismatic Jesse has been her greatest campaign manager.

Already the Panfilo Lacson-Tito Sotto tandem has emerged to vie for the highest positions. The current infighting in the President’s PDP-Laban party comes close to a sports fest, with ousted party president boxing champion Sen. Manny Pacquiao spewing fire and brimstone against alleged corruption in the Duterte government. The “born again” Bible-pounder absentee senator is just a Zoom away, training for his August boxing bout in the US. Will a KO a la the aging Rocky Balboa boost his current presidential ambition?

Esguerra popped the question about President Duterte thinking about running for vice president in the 2022 elections—the Constitution be damned—because, as Mr. Duterte said, that would make him immune from suit. With his daughter Davao City mayor Sara as presidential contender no less, or with someone he anoints. Like bro-sis Duterte-Duterte ruling his home city now.

Esquerra asked: What if Robredo wins as president and Duterte (the paterfamilias and outgoing president) wins as VP?—the ultimate horror scenario too hard for punsters to resist. Will a President Robredo treat her VP Duterte the way she has been and is being treated by the incumbent? He who makes her the subject of his rambling and ranting while members of his Cabinet hang their heads either in acquiescence or in shame?

When President Duterte mumbles his last State of the Nation Address on Monday, he will likely flaunt—while going off-script with expletives and all—what he thinks his successor should continue. That successor could be his own daughter. So help us, God.

VP Leni Robredo asks: Who will benefit, what good would it do, if I run?