The government we need 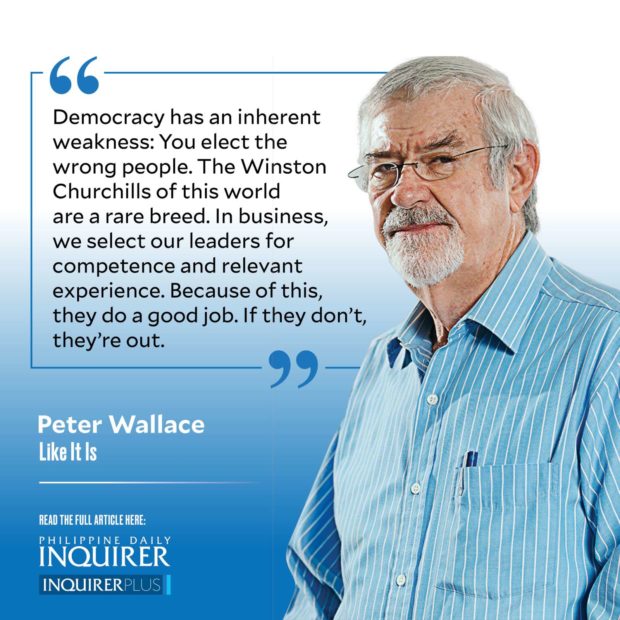 Democracy has an inherent weakness: You elect the wrong people. The Winston Churchills of this world are a rare breed.

In business, we select our leaders for competence and relevant experience.

Because of this, they do a good job. If they don’t, they’re out. They have no fixed term, it’s dependent on performance.

In a presidential system like we have in this country, to select the leader of a government, past performance ranks way down the list (admittedly, it wasn’t for President Duterte as his performance as mayor of Davao was a major factor in his selection).

In a parliamentary system, it’s somewhat better. Your peers choose their leader—and can change him for non-performance. Mind you, the definition of performance is somewhat different in politics than in business. But at least it’s a vote of knowledgeable people. Nonetheless, it is a major factor and is one of the reasons I believe a parliamentary system is superior to a presidential one. One the Philippines should adopt during the next administration. Too late now in this one, unfortunately.

The other alternative, an autocracy, is invariably a disaster for the people. Lee Kuan Yew was a very rare exception. Mostly, autocracies become dictatorships of the corrupt. Power-mad, such leaders destroy their people. North Korea is just a scale 10 example. China is an exception when it comes to the economic success of a country, but is definitely not when it comes to the freedom of its people.

What China has shown is that a tough, ruthless leader can bring a country to devastation. Under Mao Zedong, it resulted in the death of some 65 to 80 million Chinese, with the rest struggling to survive. Or it can achieve spectacular economic results, but at the expense of personal freedom (Xi Jinping). In the short term, the people will accept this. Having a roof over their head, food on the table, and educated kids is an accepted alternative to groveling poverty.

Today, China is the second biggest economy in the world. But it’s a personal freedoms disaster. You toe the party line religiously. It’s a nation you can’t trust.

The Chinese are a lovely people, their food divine (I had Peking Duck yesterday — it must rank in the top 10 of the world’s tastiest dishes). But their leaders?

Of course, they’re not the only ones with leadership problems. The bulk of the ones that do have are autocratic. For instance, North Korea under Kim Jong Un, Venezuela under Nicolás Maduro, Cameroon under Paul Biya, the Republic of Congo under Denis-Sassou Nguesso, and Eritrea under Isaias Afwerki.

It’s not a very encouraging list when you compare it to the world’s democracies. The northern European democracies rank at the top in the Social Progress Index, which measures the quality of life and social well-being across countries. Not one autocracy does. Eight countries in the Top 10 are also parliamentary governments.

Democratic countries do have their problems, too. America is showing the world today how not to run a democracy. By mindlessly choosing an atrocious leader, Americans put their country’s very democracy at risk. The basis of democracy: The vote to choose a leader has been rejected by almost half the population. And the voting system is being rigged. The US’ democratic future is under serious threat.

Which brings me to my third alternative — intelligent vote. A thought I’ve long had is that only knowledgeable people should be allowed to vote in our system of government. The result is an intelligent choice, not a mindless, populist one. Not one based on popularity or money (guns and goons seem to be around less here today). Voters should be required to answer a simple tick-a-box questionnaire on the candidates they’re voting for. Voting for someone you know nothing about is not a vote.

Unfortunately, this is not likely to happen, but what could is education of the public. That’s what we should all be actively pursuing for 2022. We can actively promote public awareness of the candidates—a massive, well-funded campaign to educate the voters, a no-holds-barred civic effort to show that this is who the candidates are, with frequent, widely covered debates required. Let’s all chip in.

The problem is, who’s going to do it? We should all fund it as it would need to be an independent apolitical organization with a

single goal: voter education regardless of party affiliation. Maybe someone like Joey Concepcion, who has done such a good job at educating us on the merits of vaccination.

As we dig ourselves out of the COVID-19 hellhole, we’ll need an enlightened leader chosen intelligently by the people.

TAGS: electing leaders, intelligent voting, Like It Is, Peter Wallace