Candidates looking for a reason 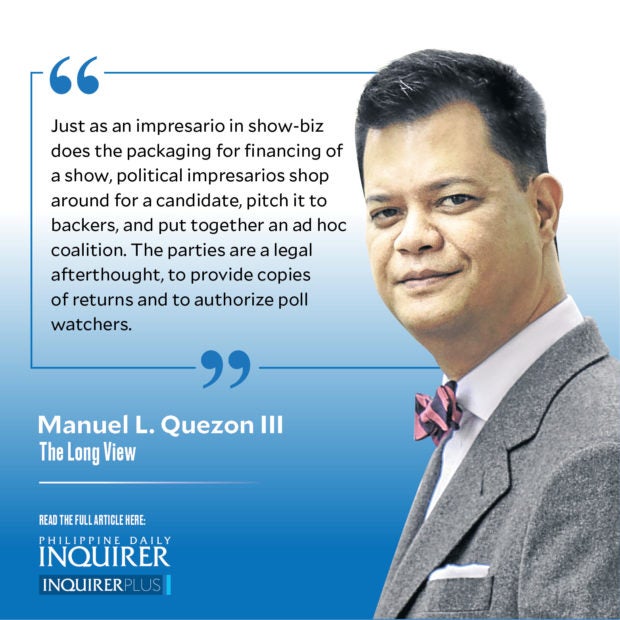 This takes a cue from Segundo Eclar Romero’s recent column on party conventions, a topic I was writing a podcast script for when his article appeared. So to preempt that for a bit, some thoughts on what the absence of political party conventions tells about the state of our politics not just today, but for the past 40 years.

We’re familiar with party conventions because of the United States, and our pre-martial law conventions were patterned on those our political leaders attended in the United States because Filipinos would lobby at each party convention for an independence plank to be included in the party platform (we had success with the Democrats but not the Republicans). But even in America, the conventions have become largely ceremonial occasions since 1968, because instead of delegates battling it out, their votes are predetermined through the system of primaries, where candidates compete to win pledged delegates.

Here at home, before the primary system could be copied, martial law killed the old parties. But it is worth reviewing what set our conventions apart from the Americans.

Of political party conventions, we used to have two kinds. The ceremonial and the free-for-all; they happen to coincide with what kind of regime the country was experiencing at the time. When presidents were powerful and exercised tight control of their parties, conventions were ceremonial coronations as was the case under the Commonwealth and again during martial law; in the postwar interval we now know as the Third Republic (1946-1972) conventions were largely battlegrounds; although, had Presidents Roxas and Magsaysay lived, it is likely they would have restored one-party rule and thus, ceremonial conventions, ahead of Marcos doing so, by force, after 1972.

Conventions became battlegrounds because our parties have a long history of breaking up on the question of leadership: the Nacionalista and Liberal divide was not just accidental, but meant to be temporary, when the prewar, monolithic Nacionalista party fractured on the question of accusations of collaboration with the Japanese for much of its prewar leadership. Since presidents could run for reelection, the defeat of an incumbent meant a repudiation of leadership which meant the official candidacy for a party was up for grabs in the next election. Interestingly, it was the Liberal Party that always provided winning candidates—even if, in the case of Magsaysay and Marcos, they had to switch to the Nacionalistas, whose only homegrown successful candidate throughout this period was Carlos P. Garcia in 1957.

Martial law in many ways brought the majority of politicians back to the situation they were (and are) most comfortable with, same as their peers in other Southeast Asian countries: membership in one super- party, the administration party, papering over internal divisions represented by factions (we’re much like the Japanese that way). It was only by accident, as I mentioned above, that this fusion kept on being postponed until Marcos accomplished it by force.

When the nonruling party politicians, belonging to many small groups, had to figure out a way to find a common candidate to challenge Marcos, they approached it in two ways. Salvador H. Laurel and his brothers, holding the franchise to the Nacionalista Party, set up a new party, Unido, and tried to have an old-style convention; but such a ceremonial gathering seemed out of step with the times. So others from different groups combined to create what came to be known as the “Convenors’ Group,” essentially a gathering of respected elders to decide on a candidate. This is how Cory Aquino was selected and Doy Laurel had to slide down and be her running mate. After Edsa 1986, the parties came back; but the old networks had dissolved; barangays became non-partisan, so parties lost their grassroots. Here is where the “political impresarios,” as Randy David calls them, entered the picture.

Just as an impresario in show-biz does the packaging for financing of a show, political impresarios shop around for a candidate, pitch it to backers, and put together an ad hoc coalition. The parties are a legal afterthought, to provide copies of returns and to authorize poll watchers. The parties that function, in the sense of being active not just during elections, are more likely to be regional ones because they are the personal networks of particular families.