President Duterte’s final State of the Nation Address (Sona) on July 26 will be weighted by his declared intention of running for vice president in 2022. The predictable listing of gains and achievements of an administration on its last year will be rendered off-kilter by an announced plan to, not relinquish power and head into the sunset, but stay squarely put although in a lesser saddle. (Assuming, of course, that he does what he threatens to do — whether as lameduck loath to accept the role or as sly pol bent on evading a possible charge of crimes against humanity in the International Criminal Court, on the coy notion that a vice president is immune from suit—and he wins.)

Still, expectation is mounting. High food and fuel prices and an erratic vaccination program against COVID-19 make a hard life even more so, but measuring the state of the nation against the President’s words in past Sonas and other official events is inevitable. (Promises made in the heat of the election campaign shouldn’t matter, even if 16 million were sufficiently wooed to take the bait. The old song-and-dance remains a honey trap in these parts.) The task of measuring is useful, especially if empirical data are available to back what is felt—for example, the despair among the poor, whose barest of resources have been zapped by the pandemic and the administration’s slapdash response to it. (Recall when the Palace first imposed a lockdown in Metro Manila, leaving thousands including health workers stranded in the streets and unable to get to their workplaces, until the Office of the Vice President arranged transport for them in certain areas.)

Top of mind is hunger, a literal gut issue for any administration and for the incumbent a downright bleak picture: 59 million Filipinos, or more than half of the population, hungry. In its July 2020 report, the United Nations’ Food and Agriculture Organization used the terms “severely food-insecure” (or going a day or days without eating due to lack of money and other resources) and “moderately food-insecure” (or experiencing uncertainty in their ability to obtain food and being forced to “compromise on the quantity and quality of the food they consume”) in presenting its findings. 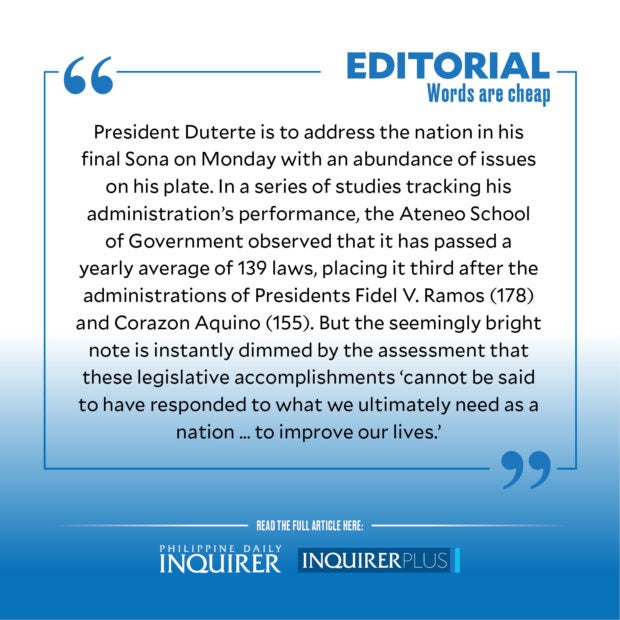 That in this country millions are hungry yet certain families easily make the list of the world’s wealthiest is a story of pain. More than irony it is collective tragedy: Hunger and malnutrition block children’s physical and intellectual growth, robbing them forever of the potential to comprehend injustice and to change the society in which they live. Per the Social Weather Stations, the 21.1-percent average hunger rate of Filipinos in 2020 is a historic high.

To aggravate life as we now know it, the daily run of the news is still marked by reports of multimillion-peso drug caches discovered or petty pushers busted. The trade in “shabu” thrives despite Mr. Duterte’s brutal war on drugs that has made widows and orphans of thousands upon thousands of women and children, and that has felled even children. After all these years of drug-related killings, only three cops have been convicted of murder.

Words are cheap, or so the President proves. “Endo” or the short-term contractual employment that he boldly promised to end within weeks, continues despite Congress’ swift act of legislation. Philippine education is in crisis. The counterinsurgency campaign is drenched with the blood of rights advocates and other activists. China has the nerve to mouth his words—that the landmark Arbitral Award is “a piece of waste paper.”

Mr. Duterte is to address the nation with an abundance of issues on his plate. In a series of studies tracking his administration’s performance, the Ateneo School of Government observed that it has passed a yearly average of 139 laws, placing it third after the administrations of Presidents Fidel V. Ramos (178) and Corazon Aquino (155). But the seemingly bright note is instantly dimmed by the assessment that these legislative accomplishments “cannot be said to have responded to what we ultimately need as a nation … to improve our lives.” One of the studies stated that while his avowed priority of stamping out crime, corruption, and illegal drugs was beyond reproach, he failed to deliver because he tended “to approach complex issues as mainly law enforcement problems.” He also “recycled” erring officials — the unsinkable Vitaliano Aguirre II comes to mind — and kept his personal wealth secret, giving the lie to his early push for freedom of information.

In the rush toward 2022, the question is if life is better today than in 2016. The misery is obvious.