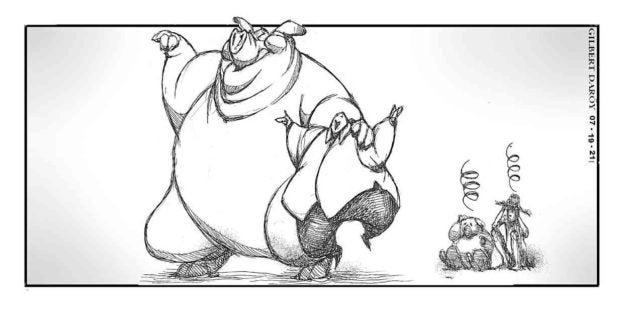 The government has allowed the importation of more pork at lower tariffs to boost supply and bring down skyrocketing prices in public markets and groceries. And yet, despite the entry of cheaper meat from abroad, consumers continue to reel from high pork prices and local hog raisers are still getting less for their output. In short, importers and their distributors seem to be the only ones benefiting from the looser import environment for pork, at the expense of farmers, consumers, and the government itself, which had to forgo billions of pesos in tax revenues due to the tariff cut.

Last January, the country’s agriculture chief gave the go-ahead to triple the country’s pork imports at reduced taxes to shore up thinning local supply due to the devastating effects of the African swine fever on the local hog population. From an annual minimum access volume (MAV) of 54,000 metric tons (MT), the government sought to triple the rate to 150,000 MT. Last April 7, Executive

Order 128 was signed by President Duterte cutting tariff on fresh, chilled, and frozen pork to 5-10 percent from a high of 40 percent for the first three months of the order’s implementation, rising to 10-20 percent in the following nine months and back to their original levels after a year. Then, on May 10, EO 133, which increased the allowed volume of pork imports, was also signed by the President.

Surveys conducted by the Samahang Industriya ng Agrikultura (Sinag) showed that farm-gate prices of hogs as of end-June declined by P20-P30 a kilo across regions from the levels the previous month. Sinag said prices in Luzon ranged from P200 to P220 a kilo; in Cebu, P140 to P150; and in Mindanao, P165 to P175 a kilo. This was an expected offshoot of the entry of more imports as ample supply would normally bring prices down. The decline in farm prices and import costs, however, was not reflected in public markets. As of July 12, prices of local pork ham and pork belly ranged from P340 to P380 a kilo. Consumers thus continue to pay above the suggested retail prices (SRP) of P270-P350 a kilo set by the government. Sinag chair Rosendo So argued that this trend in prices showed that only the importers have been benefiting from the President’s twin measures of reducing tariffs and raising import volumes. In late 2019 or before the pandemic, pork prices averaged P190-P224 a kilo in Metro Manila markets.

The other reason the government decided to allow more imports was to pull down high pork prices that have contributed to the country’s elevated inflation rate. Last June, food inflation was steady at 4.9 percent year-on-year, or the same as the level the previous month. However, inflation in the prices of meat was higher than average at 19.24 percent, reflecting the still elevated pork prices.

The Department of Finance said it expected an end to high food inflation this July, with prices easing steadily as more imports come in to boost domestic supply. But one possible problem in the import scheme is the junking of the initial recommendation of an interagency technical working group to distribute the import allocations equally among pork producers, current MAV holders, and new importers. The government instead decided to distribute the allocations on a first-come-first-served basis, reportedly to ensure that the volume would be used and that the move would attain the main intent of the program, which was to immediately address the current supply gap in pork meat. As seen in present conditions, however, that system appears to have allowed some importers to corner the bulk of import volumes and subsequently have the power to control prices.

More players in a market fosters competition and leads to lower prices. Consumers can only hope that the import scheme, imposed by the government against the impassioned opposition of a number of sectors, plays out in their favor. The government must find ways to ensure that the benefits of cheap imports do trickle down to consumers in terms of lower pork prices. This is the only way to achieve the twin goals of the import liberalization program—to bring down pork prices to affordable levels, and to dampen inflation.