A huge uproar was created by the government when it announced recently that it has formed a technical committee to decide on a “national standard for adobo.” It triggered agitation among the people and earned heaps of scorn for the administration.

The Department of Trade and Industry (DTI), which cooked up the idea, tried in vain to appease the public by clarifying that the objective is merely to set standards for marketing purposes abroad. The public’s infuriation intensified even more when it was revealed that there are also plans to set “standards” for other popular Filipino dishes like sinigang, sisig, and lechon.

There may be good motives behind the idea, which is to sort out the traditional adobo recipe out of the myriad versions present, in order “to define what (the DTI) will promote internationally.” But so many things are wrong with the move, starting with the agency, the Bureau of Product Standards (BPS), that’s been tasked to come up with the “standard.” The BPS sets standards for manufactured products like steel bars, cement, lights, tiles, appliances, and toilet bowls.

If the purpose is to identify the traditional adobo recipe for promotion purposes abroad, the BPS is the wrong lead agency. Why on earth should the government include adobo and other food dishes as “products” that should have defined “standards” in the same class as “manufactured” products? Adobo and other dishes are not “products” for which “standards” should be set out. Sure, the BPS technical committee formed for the purpose includes renowned chefs, cuisine businesspersons, food colleges, and National Commission on Culture and the Arts (NCCA) representatives. However, the committee’s work is merely recommendatory, and the final decision belongs to the DTI/BPS engineers and technocrats. It conjures images of a restaurant staffed with multiple chefs, but the palate that has the final say on the dishes belongs to an engineer skilled in mixing cement and steel. What competency do engineers have to settle differences in opinion among chefs, especially when they start clawing at each other’s necks?

It must also be mentioned that the BPS has not even bothered to convene the technical committees that evaluate manufactured products like iron roofing sheets. So why is it showing a sudden appetite for setting standards for Pinoy cuisine?

Our heritage cuisines are part of our cultural patrimony. If the DOT wants to highlight adobo as a sample of our unique culture, it should lead efforts to identify adobo’s multiple versions, create web portals to showcase them, and engage other agencies like the DTI to include the dish in their promotional jaunts abroad. 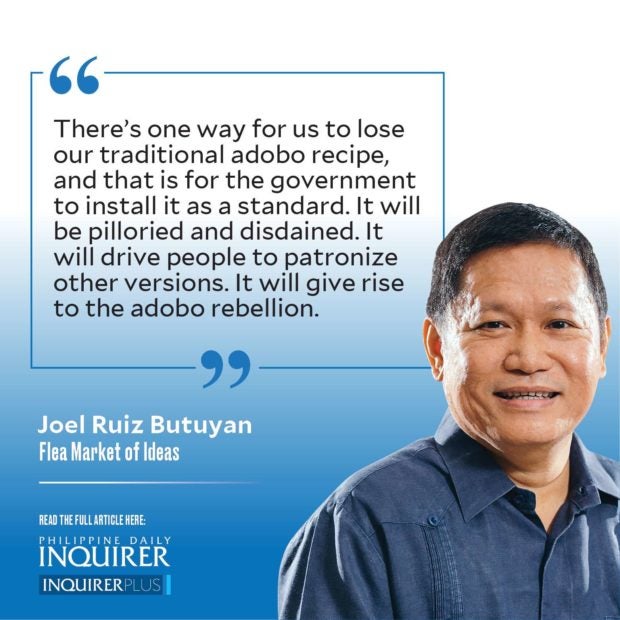 Since adobo is a flagship example of our country’s culinary arts, the NCCA is another agency that can more appropriately spearhead the project. Cuisine is a vastly expanding field that encompasses heritage, art, and culture worldwide. The NCCA should create a department that focuses on identifying, promoting, and preserving our heritage cuisines, as well as nurturing the homegrown creativity that transforms and enhances them.

As acknowledged by the DTI, there are “thousands” of different ways of cooking adobo, because there are versions in each region and in each household, such as adobo with toyo, adobo sa buko, adobo sa dilaw, adobo sa puti, adobo sa gata, and adobong Ilonggo. Despite its many varieties, adobo is one of the few cultural treasures we have that unites us as a people. By choosing one or a few among the “thousands” of varieties, the government risks tinkering with this icon of unity. It may end up fostering enmity and disunity instead.

Regarding fears that we may lose adobo to versions that evolve abroad, we should rest in the thought that adaptations of dishes like pasta and sushi have only intensified the yearning to taste their original versions in the countries that cradled such inventions.

There’s one way for us to lose our traditional adobo recipe, and that is for the government to install it as a standard. It will be pilloried and disdained. It will drive people to patronize other versions. It will give rise to the adobo rebellion.

Read Next
‘Standardizing’ adobo: Diversionary ploy?
EDITORS' PICK
Duterte: When I said I will fight drugs in 6 months, I thought it was like in Davao
Harnessing technology for quality education
Hidilyn Diaz wins weightlifting gold in Tokyo Olympics
Duterte warns of possible lockdown if ‘more aggressive’ Delta variant spreads
Connect to PH’s fastest network with new Signature Plan Lite at only P599 per month
Tips for a cheerful life
MOST READ
Hidilyn Diaz wins weightlifting gold in Tokyo Olympics
Hidilyn shoots not only for gold but also for permanent place in PH sports history
Go to war with China over West PH Sea? It will be a ‘massacre’, says Duterte
Duterte acclaims Sotto: ‘He can become a good vice president’
Don't miss out on the latest news and information.