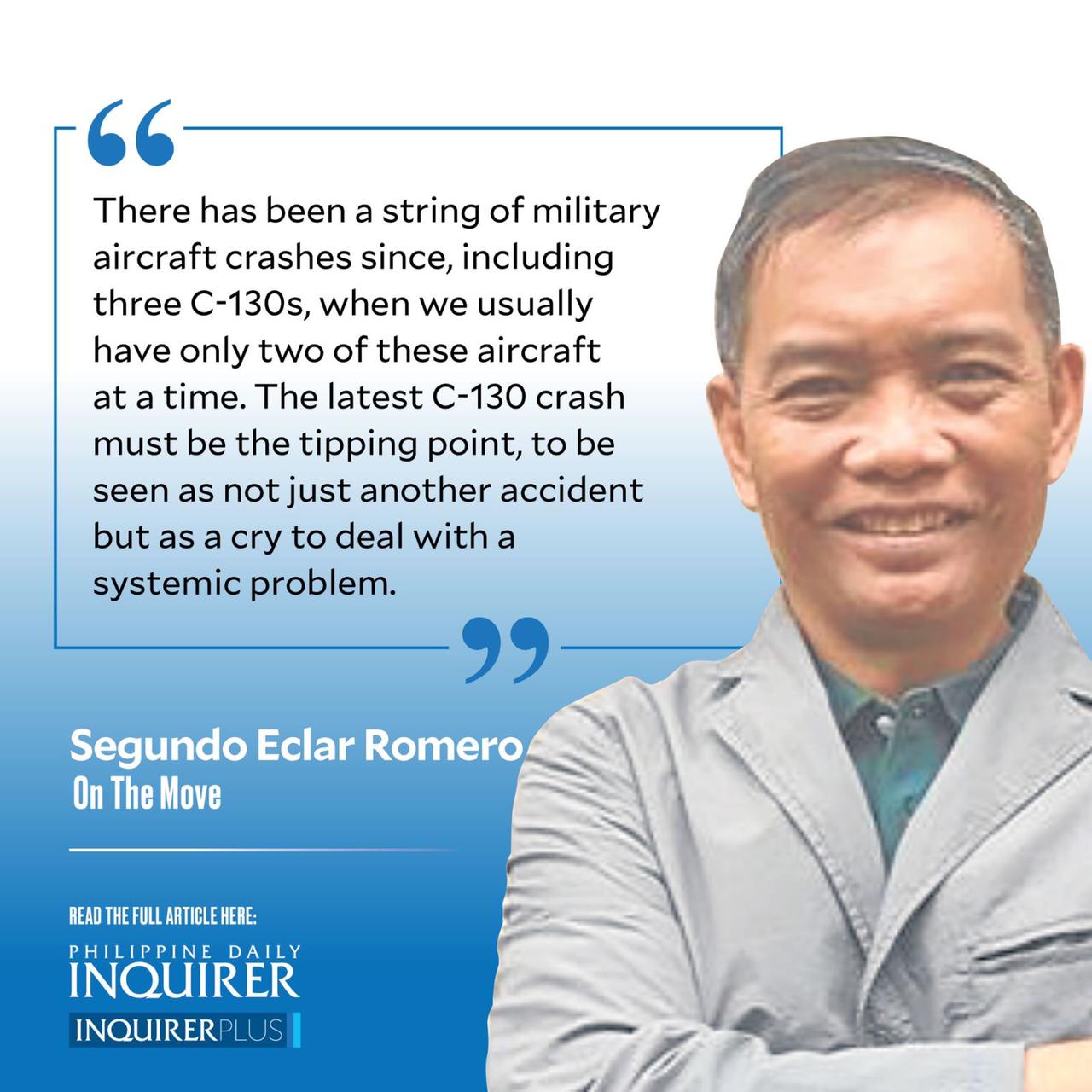 The first and last time I took a C-130 plane was in 1999, when, as an official and faculty member of the National Defense College of the Philippines (NDCP), I joined a trip to Pag-asa Island arranged by the College for our NDCP MNSA Class. After a briefing and a tour of the island, we reboarded the plane for our next stop—Cagayan de Oro. We never reached Cagayan de Oro. We ended up in Cebu because of a problem with the landing gear of the plane. Another C-130 took us back to Villamor Air Base.

After our colleague in the NDCP Strategic Studies Group, Raymundo Punongbayan, then director of Phivolcs, died in a Philippine Air Force helicopter crash in April 2005, along with seven others, I personally felt the waste these accidents bring about. Ray was world-famous as a volcanologist and seismologist, and we Filipinos remember him for his heroic role in helping the nation get through the 1990 Luzon earthquake and the 1991 Pinatubo eruption.

There has been a string of military aircraft crashes since, including three C-130s, when we usually have only two of these aircraft at a time. The latest C-130 crash must be the tipping point, to be seen as not just another accident but as a cry to deal with a systemic problem.

Armed Forces of the Philippines spokesperson Maj. Gen. Edgard Arevalo’s first public statements after the crash left the public mystified. He said the aircraft was airworthy, with some 11,000 hours before the next scheduled maintenance. He said the pilots were well-trained and experienced. There was no weather disturbance, and it was a bright midday when the mishap occurred. The AFP statements made it appear that the C-130 plane crash was a faultless mishap.

The subsequent appeal of Arevalo to the public to avoid speculation appeared to me as a premature effort to shield the military from scrutiny. Public interest and the search for explanations, even in seemingly technical and military matters, must be encouraged. After all, that C-130 plane crash destroyed 50 percent of our operational C-130 fleet of two. We should care, because a C-130, not to mention the loss of human lives, is the equivalent of 1.2 million Filipinos to be vaccinated (at P1,200 per person). The people of the Philippines should stop looking away when something goes wrong in the uniformed services, leaving them to their own internal investigation and their institutional hubris-oriented practices.

The black box has been recovered, and will be sent to the US Air Force for analysis. In the meantime, Defense Secretary Delfin Lorenzana, interviewed on television, offered a preliminary diagnosis. He speculated that prior to landing, there was a tailwind that pushed the C-130 too fast for a safe landing. The airplane being in top shape, Lorenzana made the tentative conclusion that it was “human error.”

I would not, however, readily single out the pilot of the plane for blame. I much suspect the human error is that of an organization of human beings. Last month, a brand-new Sikorsky Black Hawk combat utility helicopter crashed during a night training flight, killing six people. This makes me wonder: Is the AFP getting too many new air assets too soon for its personnel and systems to handle?

The Senate or the House should conduct an investigation in aid of legislation on this plane crash as well as the whole AFP management, maintenance, and human resource development ecosystem that made it happen. I would look into the AFP’s systems for matching aircraft acquisition with training of pilots and maintenance personnel, and provision for supplies and materials for repairs and maintenance. In a word, I am talking about human error on the part of the leadership and management of the armed forces.

As a nation, we need to reform those AFP systems that force us to make heroes of our soldiers who die from friendly fire and avoidable accidents. We make a show of giving condolences, but in reality, aren’t we nothing but a nation of widow-makers?