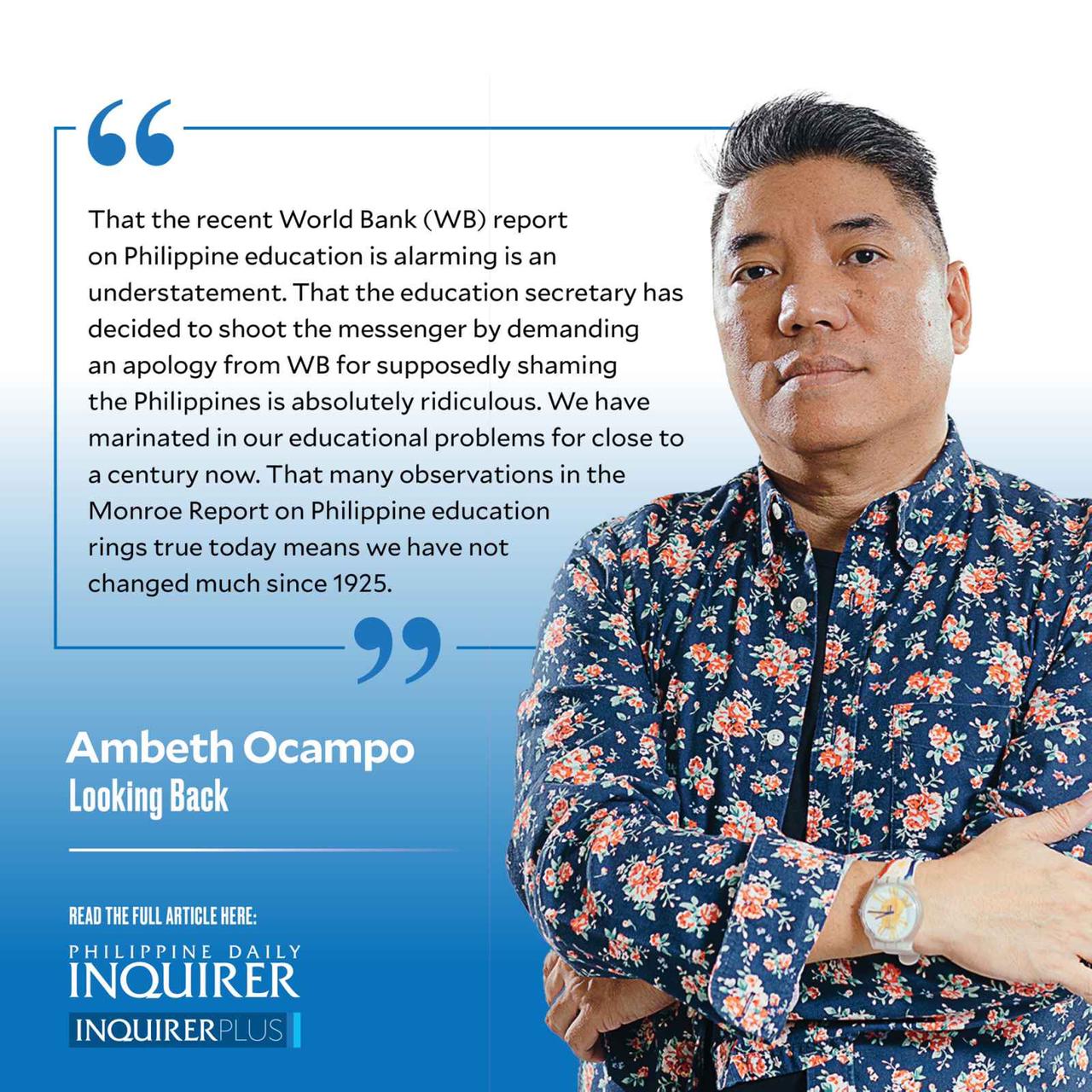 Secretary Leonor Briones says the WB should have provided her with an advance copy of the report, claiming it was based on old data (“luma na, binuhay muli”). Is she referring to the 2016 World Bank-Australian Government report on the delivery of basic education? How can the 2018 Programme for International Student Assessment (Pisa) or the 2019 Southeast Asia Primary Learning Metrics (SEA-PLM) be considered old or obsolete? Why didn’t she present more rosy data in her press conference, if she actually had them on hand, rather than hide under an imagined slight on national pride?

Basic education was extended from 10 to 13 years against much opposition. The Aquino administration took the first step; the bigger challenge lay in delivery. On paper, school conditions have improved since with more infrastructure and professionally regulated teachers. However, the true importance given to education lies in the national budget. While the United Nations recommends 6 percent GDP budget for education, in 2019 the Philippines allocated 3.9 percent, one of the lowest education budgets in Southeast Asia. Then there is the issue of budget flow and effective utilization of funds.

The 2016 WB-Australia report on basic education delivery in the Philippines showed that many teachers had low mastery of subject matter, contrasted with their self-rating that they knew their subject matter. Urban schools were congested compared to rural ones, and many failed infrastructure and sanitation standards. More than 50 female students shared a toilet. Classroom count left out their true physical condition: disrepair, poor ventilation and sound insulation, no electricity, inadequate seating, etc. School funding is mainly from the national government with little or no local government support, leaving no extras for repairs, bills, teaching materials, etc.

The 2018 Pisa administered to 15-year-old students concluding basic education measured reading, mathematical, and scientific literacy from 79 countries. The Philippines’ overall reading literacy was significantly lower than average, with only 1 in 5 Filipino students achieving proficiency level. Females performed better than males, private schools better than public schools, and urban schools better than rural ones. The country’s reading literacy was “one level lower than the minimum proficiency level.” Only 38.36 percent “can evaluate the literal meaning of simple sentences and can scan for and locate a single piece of prominently placed and explicitly stated information in a single sentence, a short text, or a simple list.” Majority of the students could not. There were dismal results too, in mathematical and scientific literacy.

The 2019 SEA-PLM showed that 1 in 4 Filipino students would struggle in the transition to secondary level. The Philippines failed in Reading, with most able to deal with “everyday texts fluently, such as simple narratives and personal opinions, and beginning to engage with their meaning. They can locate prominent details and connect related information where it is obvious, and there is minimal competing information. They can make simple inferences from prominent information.” Only 10 percent met the reading proficiency level, with 25 percent in the lowest proficiency.

More: “A typical Filipino Grade 5 student can produce very limited writing with fragmented ideas and inadequate vocabulary,” with 46 percent at the lowest proficiency: “When describing a picture, they focus only on a few isolated features or create too general ideas. They produce imperative but inconsistent language. Their limited vocabulary is inadequate to describe a picture. They use words that are basic and repetitive as well.”

Only 6 percent made proficiency. Our Grade 5 students are actually operating on the lowest Grade 4 competency. If they can’t read and write, how will they cope with math and science?

These figures are bad, but they should be taken constructively to effect timely reforms to stem the decline in our educational system.