A saint for the sick and wounded 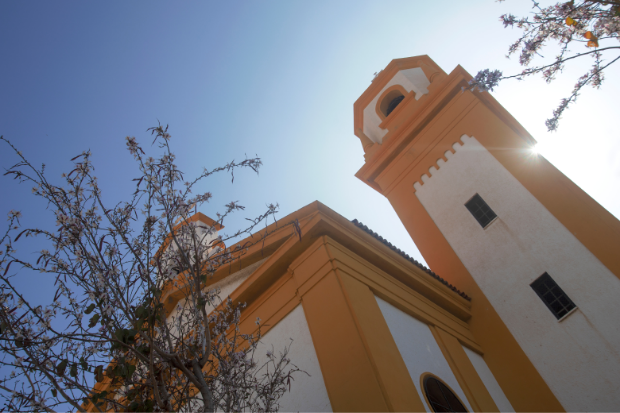 The bell pealing from his home looked like it would fall off from where it is perched on.

San Roque had a cane, wore a brown cloak, and always pointed to a wound on his knee. Every time I visited him, his dog offers him bread while someone hoists an inscription about his capacity to heal. At times I’d hear someone sweep the tiled floor as he watched me murmur things. I’d learn that he was struck by the bubonic plague but recovered. He went into isolation with his dog and died, falsely accused of espionage, in prison years later. He drew a large following after healing many on the way to Rome.

A whiff of the humid August breeze always comes with a memory of him. I only need to shut my eyes and once again be that boy wearing a blue raincoat at night, following him as men bear him on their shoulders. His antique wooden image looks so alive I’d readily believe a heart beat beyond the silver cross dangling from his chest. Despite my mom’s advice against braving the strong rain, I join the small crowd and walk squirming at the prospects. A drum and lyre band plays “Ama Namin” and “Tanging Alay” along brilliantly lighted stalls of ube halaya and puto’t kutsinta. I feel happy despite having my shoes and jeans soaked in puddles. I’d only have to gaze at him who peers back through a protective cover and know that we’ll return to his home safe. Everyone around seemed like a stranger until we all heard each other call him Tata Roque.

My grandmother, whom we cousins call Mama, grew up and first practiced law in his barrio, which is said to have been where our city’s better sensibilities emerged. Yet after years of devotion to him, she later settled with a live man, whom we call Papa, on the other side of the city.

Mama introduced us to him, as if he had a perpetual antidote to offer, when we were kids. Papa seemed well acquainted with him by then. They always took us cousins to Tata Roque’s barrio for the centuries old Holy Week processions and his death anniversary every August 16. There we’d see tents with tables of puto, pancit, lechon, gin bilog, and beer set outside houses as people sang and told stories in between bursts of raucous laughter. Fireworks would flit upwards and dazzle the night sky.

After mass on one of his commemorations, I asked Papa why Tata Roque was carried rather than pulled on a carroza as most other images of saints have been. Another old man standing beside us chimed in, “Noon kasi sinasakay siya sa carro pero natatanggal ang braso niya kapag dumadaan sa lubak. Nagalit. Kaya simula noon, binubuhat na lang siya. Hindi na natatanggal braso niya.” I believed this then and I suppose I still have reasons to do so.

Every Holy Week, a man propels the bell to gyration when processions pass by. Whenever we stop before it, I grip my candle and look up as if my head would be smashed anytime. It looks ancient with its wooden stock and darkened percussion. One could even get used to these sounds and forget they were there. But the pealing always signaled either the beginning or end of something. And all other sounds – the matracas, generators, murmurs and prayers – becomes a unified variety with them. We’d always greet, either with a touch or sign of the cross, Tata Roque who watched beneath the arch doorway, where a series of bulbs flickered.

I sometimes saw cameos of him in other churches, hospitals and houses. I myself had a mini replica as a kid who only thought he looked nice on a table with images of Jesus Christ and Mama Mary. For someone who lived centuries ago, he seemed to live far beyond my imagination could believe. His following boomed during plagues and epidemics far before I was born and perhaps is booming again in many homes across the world today. Many, myself included, put him on a pedestal of miraculous healing. I feel I’ll never come to terms with the impossibility of knowing every detail of his rich life. Sure, I know he was a lay Franciscan and sold his luxurious inheritance for the poor before going on a pilgrimage to Italy, but he remains shrouded in mystery.

During Holy Week, our family holds “Pasyong Mahal” readings. Why Mama always fetched Tata Roque’s image from his home for this ritual remained a curiousity to me until a few years ago: his caretakers barred her from taking him. Mama argued that it had been a tradition but the caretakers didn’t budge and said the practice had to stop because it digressed from the commemoration of Christ’s passion, death and resurrection. She was both furious and saddened. We all mourned this because it was the only day in the year when someone we treated as family would grace our home. But since the Pasyon only concerned biblical characters, the caretakers may have been just. Hard as it was to accept then, I’d acknowledge that they renewed more than destroyed. Maybe this is what we need in a time when traditions are obscured by the need to adapt amid urges to remain stagnant. Maybe we need to pine for what is beyond the easy and familiar.

In his home, there is a glass dish of oil just beneath where his image stands. We always dipped our fingers in it before telling him whatever healing we sought. As I was asthmatic, Mama wiped some of the oil on my throat before I started doing it myself. I would then wipe other dubious parts of my body. On his cane also hangs a small bottle; some Pasyon readers used to smell it and conclude, almost offhandedly, that it was just coconut oil. I can’t ascertain how Mama would have reacted had she heard this. After all, faith transcends mere substance. The years went by and I thanked Tata Roque for always being there for me and my family.

But it now feels difficult to call on him with all that’s happening. For one, I can’t see him amid a pandemic that continues to kill and starve many. His name also seems to bear no power against the blood spilled all around and death knells the government rings. We could call on him and the pillars of Filipino faith, Lorenzo Ruiz and Pedro Calungsod, together with a pantheon of saints against pestilence every after Oratio Imperata and still end up biting our nails over the feeling of powerlessness. With our confinement to homes, we can only seek solidarity lest we fall into the traps of bitterness. We all the more need to pray not for an instant miracle to our woes, but that we may strengthen our resolve to surpass trials against various illnesses, especially those of the spirit.

Nowadays, Tata Roque’s barrio is still graced by the bell’s pealing whenever novenas and masses are about to begin. Speakers outside his humble home also let nearby residents hear these devotionals. His caretakers had initiated online streaming as well. I do not hear the bell from where I am, but knowing that it still is there keeps me hopeful that I’ll hear it peal with all its ancient luster again.

When I’ve exhausted all probable remedies to despair, I’ve none to cling to, really, but my intuition, even if it means uncertainty. But we are bound to grasp what is real for answers. Tata Roque’s image is one reality I’ll hold dear. His name reminds me of the toughness of a rock. His face reminds me of the gentleness of a dove. His knee reminds me of how wounded we are.

Like the bell’s pealing, may our cries resonate from a stronghold on which we can perch them on. There will be wounds that will turn into scars, but perhaps only their source and depth will determine the convalescence we need. As in prayer, we face every impossibility with confidence and a resounding amen.

Jose Martin V. Singh is a BA Creative Writing student at the University of the Philippines Diliman. While he lives with a prayerful family, he badly misses going to an actual mass and praying with a physical community. His petition, “I pray that we seek God in everything. May the saints guide us along the way of truth and perseverance. May we seek peace in our lives. May we always be grateful and filled with hope and love even if the days seem bleak.”

Expecting a daughter in the time of COVID-19

The Philippines my parents helped create

Typhoon Quinta update: Signal No. 3 in parts of Batangas, Mindoro