No end to South China Sea disputes without code of conduct 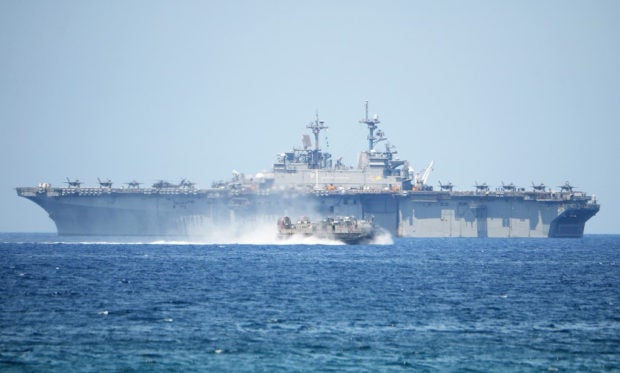 A US Navy hover craft speeds past the USS Wasp, US Navy multipurpose amphibious assault ship, during the amphibious landing exercises as part of the annual joint US-Philippines military exercise on the shores of San Antonio town, facing the South China sea, Zambales province on April 11, 2019. AFP/Ted Aljibe via The Jakarta Post/Asia News Network

JAKARTA — A series of events, ranging from social unrest in the United States, Hong Kong and much of Europe to the COVID-19 pandemic, which has infected more than 15.6 million people and killed over 630,000 of them, should prove that 2020 has so far been a very difficult year to navigate.

The South China Sea has not been spared the nail-biting tension of 2020. As claimant states are preoccupied with efforts to fight the pandemic, numerous worrying incidents have occurred within the maritime territory, exacerbating the animosity among the states. The presence of external actors has added strain to the geopolitical turmoil.

Violations of sovereign rights form one of the most pressing issues in the South China Sea. The biggest incident so far was the West Capella standoff after Malaysia started an oil and gas survey in late 2019 within the Malaysia-Vietnam Joint Defined Area.

The operation of the West Capella drillship prompted Beijing to dispatch several China Coast Guard (CCG) vessels to trail, and harass, the drillship and its supply vessels. Vietnam also scrambled some of its maritime militia into the area to observe the drillship.

Meanwhile, Malaysia doubled-down on its initial move by deploying the Royal Malaysian Navy’s KD Jebat, a 2,270-ton guided missile frigate, to protect the West Capella’s operation. At one time the Malaysian warship forced a CCG vessel to stand down.

Beijing has simultaneously initiated a showdown with Malaysia at the Luconia Shoals, where CCG vessels maintain a near-constant presence off the coast of Sarawak. At the culmination of it all, China sent its survey vessel Haiyang Dizhi 8, along with a flotilla of coast guard and paramilitary vessels.

In response to the standoff, the US maintained a presence there for a month with an array of multi-day patrols involving the US Navy, and a flyby of US Air Force bombers. On top of that, the US conducted five Freedom of Navigation Operations (FONOPs) in the South China Sea in the first half of the year “to challenge the unilateral claims of China on the entirety of the South China Sea, and to maintain the act of innocent passage by any ships on the high seas” and held a joint military exercise with Australia in April.

This incident not only amounts to a violation of Philippine’s EEZ but also to the illegal use of threat in high seas, which is in direct breach of the United Nations Convention of the Law of the Sea, to which China is a party.

The turmoil has gone unabated when the negotiation of the Code of Conduct (CoC) in South China Sea has been put on hold, mostly because of the pandemic.

The talks on the CoC, however, have been subject to criticism in the first place. One American scholar commented that the current draft, passed in September 2019, had “very little ‘agreed’ upon.” Some points are still very contentious, such as dispute settlement procedures, and fishing and seabed management. Meanwhile, a Singaporean scholar said that, as the negotiation was suspended, Beijing was consolidating its presence amid the COVID-19 outbreak. As Asean member states have their hands full in dealing with the pandemic, Beijing wants to raise its leverage in the negotiation when it restarts.

Illegal, unreported and unregulated fishing is another source of disputes among claimant states in the South China Sea. A fleet of more than 300 Vietnamese fishing vessels ventured into Chinese waters around February 2020. Some vessels were identified to operate with their transponders switched off. Several Chinese analysts suggest that some vessels were there to spy on Chinese military facilities.

This will encourage emboldened Southeast Asian claimant states to fight further aggression, as the Philippines has demonstrated in its decision to suspend termination of its Visiting Forces Agreement with the US.

It only shows that claimant states need support to stake their claims within the area.

With the CoC negotiation stagnating in these pressing times, there will be a lot of clutter to clean up before any agreement could be pushed forward between the South China Sea littoral states.

The author, Gilang Kembara, is a researcher at the Department of International Relations, Center for Strategic and International Studies (CSIS) Indonesia. The original article was published in CSIS Commentaries.

The NBA Finals: Why the Heat will win the championship