The dangerous weight of being sexy for him 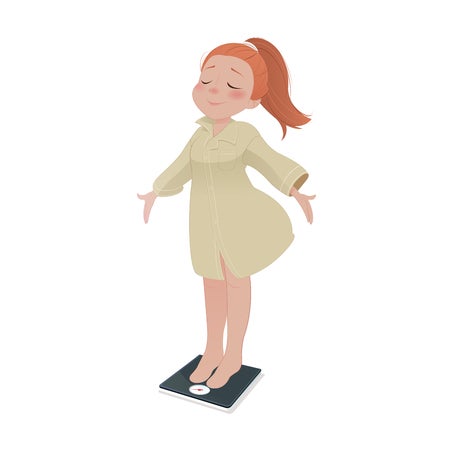 57 kilograms. I have always been conscious of my weight, even though my metabolism is good. Despite my busy schedule, I make sure that I exercise four times a week. I sometimes go on a diet. While there’s a story on why I’m committed to taking care of my body, sharing it has never crossed my mind, until now.

Those were the words that broke the ice between my first love and me in high school. I unconsciously took them to heart. Because we like the same kind of humor, we immediately became friends. I helped him with English and Math, and he helped me copy notes in view of my terrible eyesight. Because of how close we were, people thought there’s something between us. To be honest, I don’t know when I started falling in love with him. But the words, “Bakit ang taba mo,” became my reminder to do something.

I told myself that I have to become his ideal girl so he would love me back. Although I always exercise, that suddenly became not enough for me. I started losing weight by eating a quarter cup of rice and more vegetables. I ditched the snacks and sweets. I also exercised for longer periods of time. Before sleeping, I weighed myself to check my progress.

44 kilograms. “Ang taba taba, ang cute cute,” he said while playing with my left arm during class. I became desperate to lose more weight. Consequently, I started getting more hungry as well. I broke classroom rules by sneaking food in the pockets of my uniform after recess and lunch breaks.

“Ang takaw mo naman. Joke lang,” he said when he saw me eating one time. I panicked about being caught by him. I started controlling my hunger since that day. Every day after school, I ate several sticks of kwek kwek and garlic rice. Since I ate a lot after school, I would go home feeling guilty.

One day, he started avoiding me. I didn’t know why. Soon, I discovered that I can use my two fingers to hit the back of my throat, to vomit every meal I ate. That way, I can return to my normal appetite. I did this two times a day.

40 kilograms. Using my two fingers to induce vomits was effective. I vomited in the bathroom. As my vomiting became frequent, my classmates thought I was pregnant. But I didn’t care. I forced out every meal I ate. But I wasn’t contented. To monitor the results, I weighed myself two times a day. Whenever my friends invited me out, I rejected them, saying that I was on a diet. My obsession to prove that I wasn’t fat didn’t stop there. I also skipped breakfast or lunch, just to shed excess weight. I began to weaken but I continued my routine.

33 kilograms. I thought he’ll talk to me again, and love me back. But he didn’t. I found out that he’s pursuing someone else. After I watched them cross the street, I bought a bucket of fried chicken to comfort myself. But the effects of my sudden weight loss took effect. I suddenly collapsed when I arrived home and had to be absent for a week. During my absence, I had no choice but to eat. It was only when mother cooked my favorite pancit canton that I returned to my usual appetite.

One day, my mother noted how much weight I lost. I burst into tears while fighting off a fever. During my checkup sometime later, I was asked to take a series of tests and to return for the results.

Kilograms unknown. My fear of the results caused me to halt my attempts in losing weight. I’ve also stopped weighing since my collapse, and I returned to my normal appetite. Although rumors of my supposed pregnancy have died down, there were people who asked me if I intentionally made myself sick to get his attention. However, I didn’t have the time to clear my name since I had to represent the school for a regional press contest.

Bulimia nervosa. I was notified of the results a few weeks before the competition. I was recommended to visit a psychiatrist after. During my first visit, she asked me how much I weigh. I didn’t respond since I haven’t been weighing myself for more than two weeks. She then asked me to step on the weighing scale.

44 kilograms. I panicked. The psychiatrist then said that I gained weight because I haven’t been exercising. I answered by asking her what she thought about my weight. She said fat, then she explained that bulimia is an eating disorder caused by self-induced vomiting to compensate for binge eating. She didn’t prescribe any medication, but she assured me that we’ll work through cognitive behavioral therapy together. She then asked me to make a list of the food I normally eat, for the next session. As my therapy sessions went on, I didn’t realize that I haven’t been paying much attention to him anymore. However, I still felt the pain when I saw him wooing his lady love. To forget the pain, I instead focused on the contest and on studying well.

A few weeks before graduation, I was announced as one of the students who graduated with special awards. He congratulated me while his friends cheered. Why is he giving me attention again? Even when I was curious about the reason, I didn’t have the energy anymore to think further about it. We soon graduated from high school and went to separate universities.

48 kilograms. “Do things for yourself and not for the pleasure of others.” Those were my psychiatrist’s words in our last session, during my freshman year in college.

I’m grateful that I didn’t suffer from extreme conditions which would have required me to be confined. As I went through college, there were still moments when I hated myself for being fat. I felt so bad that I took drastic measures just to make him love me back. Nevertheless, the experience gave me a lesson: I deserve better.

57 kilograms. It took me quite a while to accept that despite how quick my metabolism is, I’m quite big-boned, which makes my physique appear bigger. I also realized that the right person for me wouldn’t force me to change myself. I started to appreciate my fondness for food. More importantly, I’ve realized that no man is worth losing weight for. Like what my psychiatrist said, I have to take care of my body for my own well-being and not for someone else.

Now, whenever I feel conscious of how fat I am, I remind myself of how beautiful I am. Beautiful, all 57 kilograms of me, and more.

Hannah Mallorca studied literature and creative writing at De La Salle University. She enjoys reading, taking walks and listening to music. Her favorite dishes include mostly anything with green leafy vegetables. She also likes noodles and fried treats. When not writing, she makes artworks using her calligraphy skills.