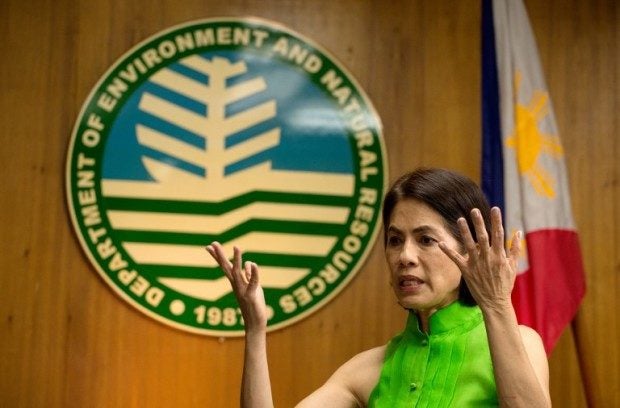 This picture taken on Feb. 22, 2017 shows Philippines’ former Department of Energy and Natural Resources Secretary Regina Lopez gesturing during an interview at the DENR building in Manila. (AFP file photo)

Love for a boss is rare.

Ask any employee what’s the first thing that comes to mind upon hearing the word “boss” and I’ll bet the employee would say “stress” or “toxic” or “hate,” among others. More often than not, bosses complicate our lives, scare the hell out of us, or make us want to go to therapy.

But let me tell you a story of a “boss” who changed it all for me.

It was in February 2017 when I first reported to former Department of Environment and Natural Resources Secretary Gina Lopez. As her executive assistant, I accompanied her to a roundtable discussion with a local newspaper to present her mining rehabilitation plans. I was nervous beyond my wits but I was also excited because it’s not everyday that I get to be with “the” Gina Lopez. After the meeting, when we were already inside the van, to my surprise, she asked me:

“Do you have questions, Alecks?”
“Where do you get your courage?” I replied.
“From God. You have to believe in what you do. Never feel small.”

Never feel small. That was the very first lesson she taught me. You see, after every speaking engagement, she always reminded everyone, “You can be anything, do anything.” She would say these words with such life and energy, you’ll start believing they’re true.

She was blessed with a level of charisma that would entice your brain cells to give their full attention to what she’s saying. One time, she visited a pro-mining community whose outraged protesters didn’t want the mining company to be closed. It happened that it was her bodyguard’s birthday. She literally asked the protesters to pause and sing a happy birthday for her bodyguard. One second they were an angry mob, the next, they were a celebratory gang. Who else in the world could make angry protesters sing the birthday song? Only Gina Lopez.

When the word “fearless” came to be, God was probably thinking about her, because she was the embodiment of that word, in all ways possible. She fought all those mining giants when no one else would even dare. Her belief in her principles was so strong, it was enough to shield her from all the death threats that came her way.

And when death, through the big C, waged a war against her, she chose to still see the grass’ greener side, and even said, “I had cancer and it didn’t bother me at all because as far as I saw, it was a piece of paper. You just keep positive because cancer works on fear. Don’t worry about it and anything can be fixed.”

Once I asked her if she ever thought of running the huge TV network led by the family she came from. She answered, “No. I never wanted it. I love helping others. That’s my passion.”

Indeed, she helped others. You see, after the Commission on Appointments’ rejection of her as DENR Secretary, she could have opted to retire and just enjoy life, because she definitely could. She had the resources anyway. But even without the position, she continued to serve. During that time, she wasn’t allowed to go back to the network’s foundation for a year due to conflicts of interest with DENR. But due to her deep desire to raise sustainable communities, she founded an organization and called it ILOVE (Investments in Loving Organizations for Village Economies).

She advocated for area development that is nurturing, progressive and protective of the strengths and potential of an area, with a non-negotiable commitment to the people living there. She believed in the power of communities to organize themselves and manage sustainable livelihoods without forgetting to care for the environment.

In a country where political and business interests almost always prevail, she was the hope in Pandora’s box, the one who’ll make you believe that there are still good people in this world. Although she came from an elite family, her heart was always with the people. She would conduct dialogues with them and lend her ears, giving them the chance to voice out their suffering. During our estero visits, not once did she hesitate to go inside the houses of the people. She would interact with everyone, carry children and hug them like they’re her own. In every community that we visited, there was never a time when she was not welcomed by the words, “Kayo na lang po ang pag-asa namin, Secretary Gina.”

She never put people in boxes. For her, there is goodness in everyone. And because there is kindness in every person, she believed that there’s no problem that couldn’t be solved by working together. From her I learned that no matter who you are or where you are from, as long as you have the heart, there is something that you can do.

Though her stint in DENR was short-lived, her message surely rang the longest and the loudest. And to my biased opinion, arguably longer and louder than any DENR Secretary that ever stood.

She did not treat her employees as mere employees. She treated them as family. Every time she would go out with her sons to lunch, dinner, or to a movie, she would invite her whole staff to join them. She was the kind of boss who would randomly take you shopping, who would organize birthday surprises for you, who would remember your favorite things and tell you, “I know you love it. That’s why I gave it to you.”

When the time came for me to choose a different path because I wanted to focus on theater, she gave her full support: “Hey, sweetheart, I totally understand. I always wondered why you were with us if your interest was acting. Don’t worry, we will figure it out. And yes, I do love you. And yes, never ever ever ever EVER feel you are small.”

I didn’t lose contact with her after I resigned. From time to time, I would share my little successes in acting with her. She would congratulate me and remind me that when I become famous, I would donate to ILOVE so we can raise an island – an inside joke between us, a promise I intend to keep.

She was the very essence of everything we’ve forgotten due to all the horror happening all around. She was a reminder that anyone of us could make history, as long as we have the heart.

There are types of people in this world whom you know you would meet again somewhere, sometimes because there are plenty of them around. There are also those rare ones; you meet them for a very brief time yet they make the biggest impact. GL was one of them. Once you met her, you would know that there could never be anyone like her. Not only was she one of a kind, she was once in a lifetime.

She changed the perceptions one could have of a boss, as she was a game changer in everything. But probably it’s also because she was not just any boss – she was a mother. To nature, to the country, to her sons, to us her employees, and to anyone she has ever encountered.

As my boss, indeed, she complicated my life. But only because her advocacies were worth complicating my life for.

She scared the hell out of me. But only because we were making history.

She made me want to go to therapy. But only because I am now referring to her in the past tense. And I don’t understand why is it that when a person passes away, she would be in the past tense, as if her life could be measured by a grammar rule, emphasizing its finality.

“You” by the Carpenters is one of her favorite songs. It perfectly suits her because Gina Lopez is one of those few things worth remembering.

GL, I can never thank you enough for letting me journey with you. I’ll keep the light shining.

Alecks Ambayec, from the University of the Philippines, is an environmental advocate by day and an aspiring actress by night. She finds delight in traveling, literature, writing and photography. This is her second essay for INQUIRER.net’s “Love. Life.”

Why we need to write about love: Looking back on a year of ‘Love. Life.’

Hey, sungit! Or how to tell a guy you like him after 16 years