Does changing the status of Kashmir resolve one of the world’s longest-running conflicts? 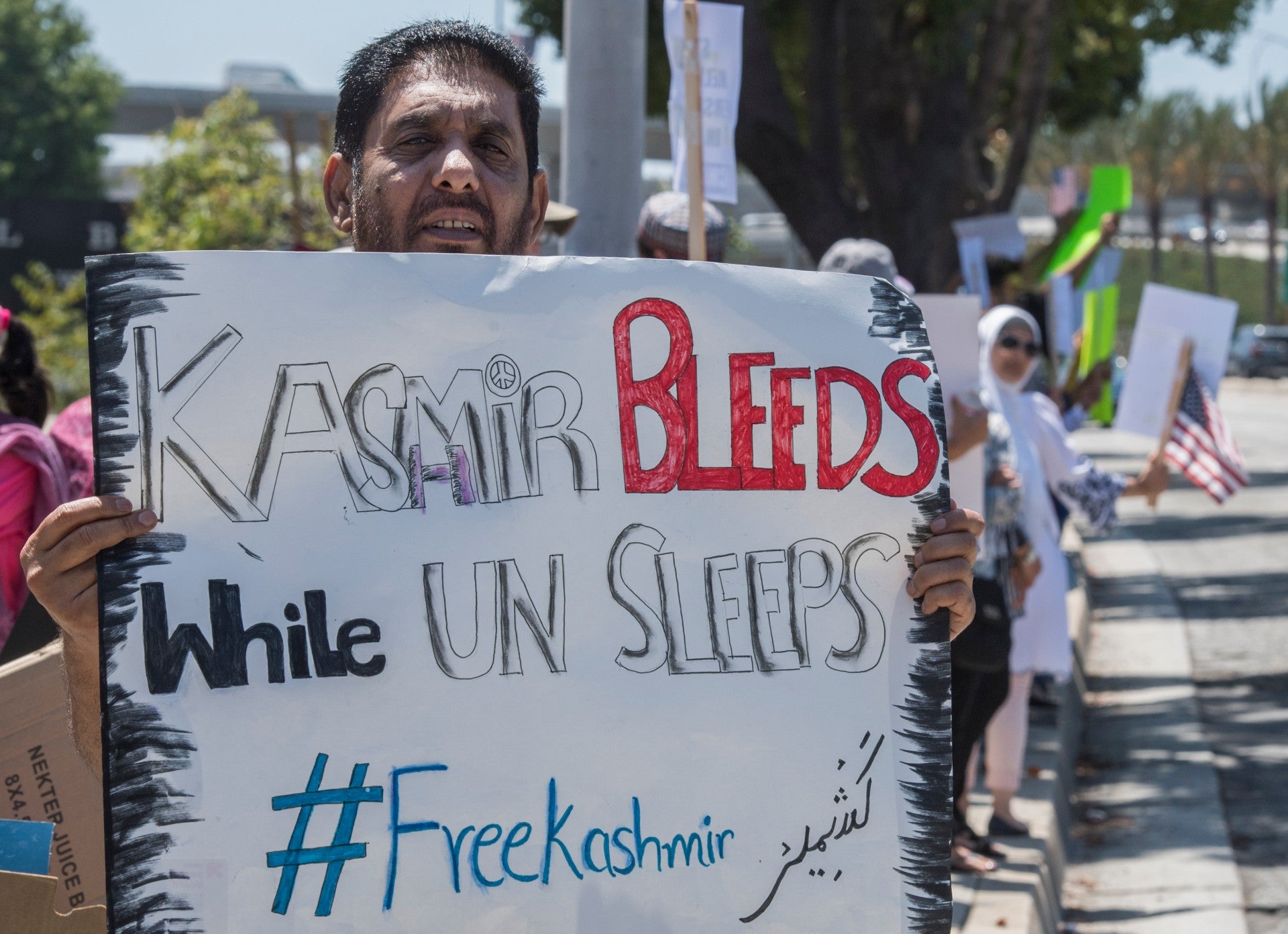 Members of the American Muslim community stage a demonstration to protest what they say is the Indian government’s occupation of Jammu and Kashmir, a Muslim-majority state within India, outside the Federal Building in Los Angeles on August 10, 2019.
Mark RALSTON / AFP

KATHMANDU — Two narratives have emerged in India post the Narendra Modi-led government’s decision to abrogate the special status of Jammu and Kashmir and bifurcate the state into two different union territories directly controlled by the centre. The first contends that Kashmir is an inalienable part of India, while the second argues that it is a contested territory, hence the special status that had been articulated in the constitution. Those who believe in the first suggest the decision corrects a ‘historic blunder’, and is ‘a much-needed step for the complete emotional integration of the people of Jammu and Kashmir with the Indian Union.’ After all, if Kashmir is a part of India, why was it allowed to have its own constitution, and why was it exempt from all laws made by the Indian parliament? Why couldn’t other Indians buy land in the state? The BJP had long said it would seek to remove the special status, while its longstanding emotional connect on the issue also motivated it. ‘The Prime Minister himself took it as a personal exercise in terms of the commitment and the push required to do away with Article 370,’ said Ruhi Tewari, news editor at The Print.

The second narrative questions the manner in which the decision was taken. Monday was just the crescendo in what had been a week-long cauldron of speculations and rumors. The BJP government first said Pakistan will be targeting the Amarnath Yatra, the annual pilgrimage trek in Kashmir; it then showed ‘evidence’ of the latter’s skullduggery; the Yatra was cancelled; tourists were asked to return; government officials were told to be on high alert; additional forces were rushed in; and finally, all communication networks were cut off while mainstream politicians including former chief ministers were put on house arrest on Sunday night before Monday’s coup de grace. ‘It is repression, plain and simple, reminiscent of the Reichstag or Chinese constitutional ideology that sees federalism as an obstacle to a strong state and homogenous culture.’

On both counts, however, the question still remains: does changing the constitutional status of Jammu and Kashmir vis-a-vis India resolve one of the world’s longest-running conflicts?

Early reports from Kashmir suggest the people are anxious, and worried that the conflict will escalate. A few protests have already broken out. Kashmiri mainstream political leaders—like Omar Abdullah, who was arrested on Monday—have called it a ‘total betrayal of trust’ with ‘dangerous consequences’. Pakistan ‘condemned’ India’s move by saying it would ‘exercise all possible options’; it has expelled the Indian high commissioner, and downgraded bilateral ties, a decision India‘regrets’. It has also suspended the India-Pakistan train service.

Reports suggest the US had been kept in the loop about the decision, albeit not about the bifurcation, although a US official denied it while calling for dialogue. India has told the international community that the move was to ensure ‘good governance, promoting social justice and ensuring economic development’. Indian news outlets have highlighted how the US seeking Pakistan’s assistance as it negotiates an exit from Afghanistan, and Trump’s recent offer of playing the mediator in the conflict may have forced India’s hand. Delhi’s new strategic calculation considers a pro-Pakistan Taliban coming to power in Kabul, and its impact on Kashmir. China has taken umbrage at the decision on Ladakh, where the border is disputed. It has also said Kashmir is an ‘issue left from the past between India and Pakistan’, and the two parties ‘should refrain from taking actions that will unilaterally change the status quo and escalate tensions’. India meanwhile has called Kashmir ‘an internal issue’, and that it ‘does not comment on the internal affairs of other countries and similarly expects other countries to do likewise’.

Despite the executive order, the situation on the ground in Kashmir will remain the same for some time. A security journalist I spoke to expected Pakistan to escalate the conflict, and that India needed to be prepared. Another journalist has written, ‘For jihadists, this is a gift: It’s safe to say organisations like Al-Qaeda will find it easier to recruit than ever before for the war they have promised to wage against India’s cities.’

While the future of ‘the country without a post office’ is being decided by a centre far removed from it physically and emotionally, the executive order is a ‘win-win’ for the BJP’s politics and electoral prospects, Tewari said. The decision is a popular one in the mainland, evidenced by widespread support from opposition parties as well. ‘The Congress is split wide open on the issue,’ she said. The party has issued a statement on the way the bill was moved, but did not question the decision itself.

However, the passage of the bill is a grim sign for Indian federalism. Two key points stand here: one, that it was preceded by a weeklong fear-mongering that was couched in security innuendoes; two, that the abrogation of Article 370 required the consent of the Jammu and Kashmir assembly, but since the state was being ruled by a governor under president’s rule, the governor was held to be the equivalent of an elected government. This, ‘in effect, therefore […] amounts to [India’s central government] taking its own consent to amend the Constitution.’ Further, constitutional experts have argued the BJP used a provision under Article 370 to extend the Indian constitution to the state, which could be deemed invalid. The executive order has been taken to the Supreme Court.

Whatever the legalities, this is Narendra Modi’s boldest, and riskiest, move yet as prime minister. The security journalist told me India now needed to back up the abrogation by providing employment and development in Kashmir, while Ruhi Tewari said, ‘The next three odd months are crucial as to how the decision plays out in Kashmir, and how the BJP handles it.’ Others have also pointed out what the decision means for Delhi’s ‘special relationship’ with states in the Northeast. ‘How can we justify offering Nagaland asymmetric federalism but deny it to Kashmir?’ Some of the states are already anxious.

The primary question here is how Kashmiris will accept this new deal, especially after the tense past few years. The decision also signals a move towards uniformity, of India’s homogenization process akin to China and other single-ethnicity dominated states. Serious challenges have been posed to India’s federal system, with a centre that is willing to mould legislature to address what it sees as flaws in the system, aided by an opposition either shocked or malleable to its will. With one stroke of the pen, Modi has changed the status quo. But a conflict like Kashmir may require more than just New Delhi’s will to resolve it.