Alarming plastic pollution in the Bay of Bengal 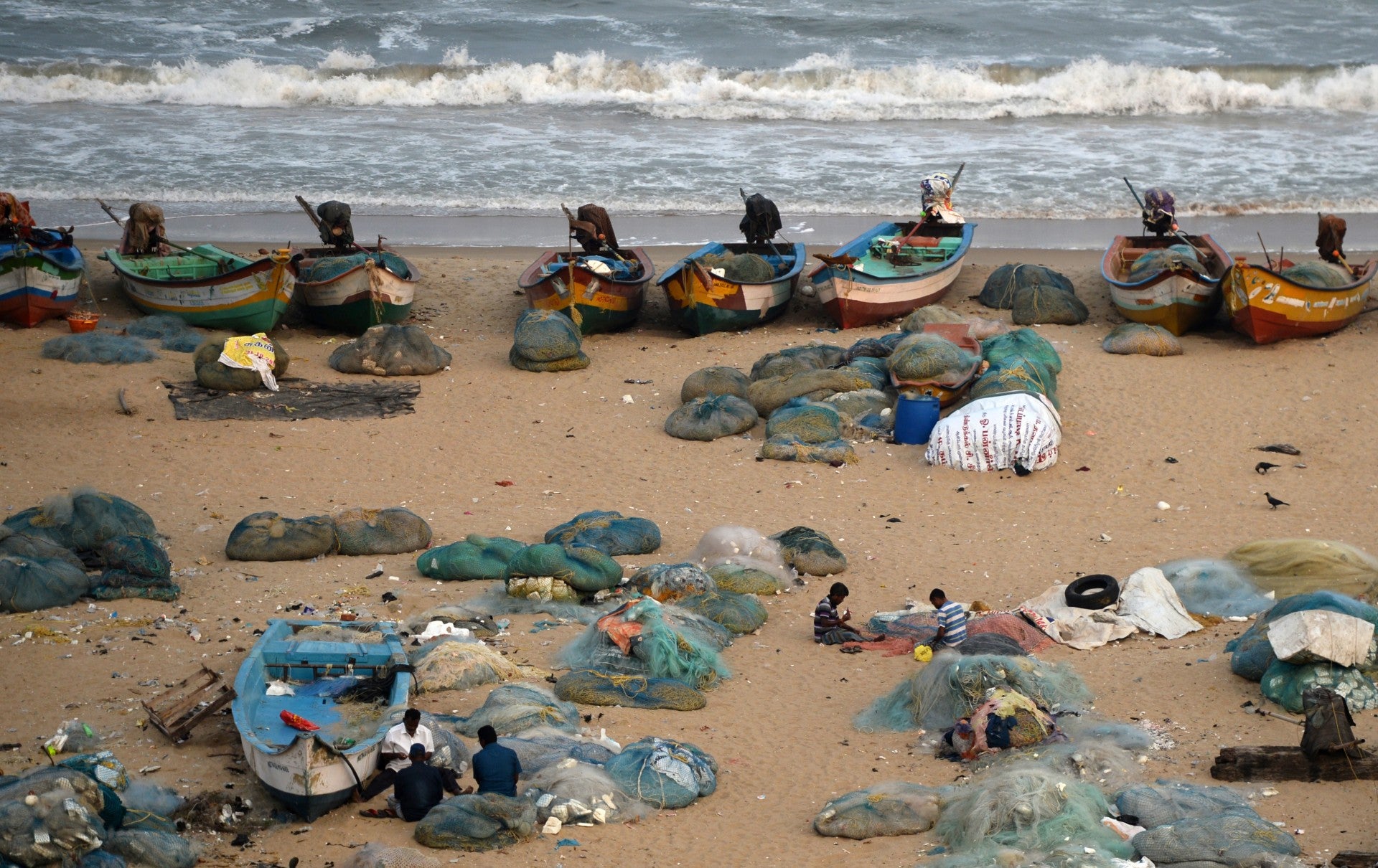 Indian fishermen mend fishing nets along a beach on the coast of the Bay of Bengal, in Chennai on November 12, 2018.
ARUN SANKAR / AFP

DHAKA — Plastics play a vital role in our daily life. However, plastic debris in the marine environment has serious negative impacts on marine resources, fisheries as well as on the use of coastal areas for tourism. It is also a threat to our precious Blue Economy.

Globally, one million plastic bottles are purchased every minute. Around 8 million metric tons of plastics go into the oceans every year. Over 46,000 pieces of plastics are found in one square mile of ocean. The global production and consumption of plastics have continued to rise and it is estimated that by 2050, there will be more plastics than fishes in the world’s oceans.

The Bay of Bengal is rich in marine resources and produces 6 million tons of fish that correspond to nearly 4 percent of the total global catch. It is an important source of animal protein for nearly 400 million people in this region. But the Bay is heavily littered with plastics and huge amounts of plastic waste are found on the shorelines, on the seabed, and suspended in the water column. The corals of St. Martin Island are almost dead, littered with marine debris, plastic packages, and food wrap discarded by hundreds of tourists daily. The Bay of Bengal and the South China Sea are the new plastic hotspots in Asia. Every year about 2 lakh tons of plastics enter the Bay of Bengal from Bangladesh. According to the Earth Day Network of USA (2018), Bangladesh is the 10th most plastic polluting countries in the world. Population pressure, poor waste management practices and shipbreaking are primarily responsible for that. Every year, 60-65 ships are broken in Chattogram and Khulna.

Plastics can have a direct impact on animals, both through entanglement and ingestion that cause starvation or suffocation of wildlife. It also affects biota through leakage of harmful chemicals often contained in plastics or attached to them. Perhaps what is most disturbing is the fact that plastic has been found inside fish and large mammals in different parts of the world. For instance, a dead whale found in Thailand had 80 plastic bags in its stomach. Fishes of the Pacific coast are estimated to consume over 2,200 tons of plastic in a year. The disintegrated plastic debris can potentially be ingested by the humans when they eat seafood, resulting in a number of fatal diseases including cancer. It is of the utmost importance to minimize plastic pollution.

Microplastics, which are tiny pieces of plastic or fibers smaller than 5 mm, are even a more dangerous form of marine debris/litter. About 80 percent of marine litter is microplastics. Face wash, toothpaste, scrubs and anti-aging creams contain thousands of microplastics per product. A single shower can result in 100,000 plastic particles entering the ocean. Microplastics (also known as microbeads) are too small to be retained by the filters used at sewage treatment plants. Fish and shellfish ingest microplastics. Hence the saying, “what goes in the sea goes in you.”

The problem lies in the way plastics are consumed and the way consumers use plastics. We have a tendency to use plastic materials which are less durable and less valuable. Our single-use or throw-away culture is deteriorating the problem. Lack of coordination among different ministries, divisions, NGOs and the private sector, the absence of a dedicated agency to harness the potential of Blue Economy, and having no system in place to make consumers and industries responsible for the final deposition of plastics, among others, are major barriers to reducing plastics and fisheries waste from the Bay.

The topic of excessive plastic use and its dumping into the marine environment has already been on international, regional and national agendas for several years. Prevention of Marine Pollution by Dumping of Wastes, 1972, and Prevention of Pollution from Ships, 1988, are two notable international conventions. At the national level, Marine Pollution Ordinance 1989 and Bangladesh Environment Protection Act 1995 are dealing with marine pollution. Besides, according to SDG 14.1, by 2025, countries have to prevent and significantly reduce marine pollution of all kinds including marine debris or litter. Sadly, in spite of all the agreements and action plans, plastic is still entering the world’s oceans in huge amounts every year, both in the form of microplastics and much larger debris.

The question then is, why we are failing to control plastic pollution? Who should take the responsibility for that? Should national governments take the lead? Should NGOs, industry or the public play the major role? The answer is, all actors have to play an equal role. Governments hold a key to a very important part of the solution as they can make decisions on bans, tariffs, taxes, etc. Governments can put taxes on single-use plastic items. Financial incentives to buy more environmentally-friendly fishing nets and/or some kind of deposit-refund system can also be very effective in tackling plastic waste. Governments can also ban microplastics in consumer goods. That said, a preventative approach will be more helpful than, say, focusing only on imposing rules and regulations. Raising awareness amongst the consumers and educate the people can be the key to reducing microplastics pollution from the Bay.

The Bay of Bengal Initiative for Multi-Sectoral Technical and Economic Cooperation (BIMSTEC) is an appropriate regional organisation which should take the lead to control plastic pollution. The BIMSTEC member-countries can address this problem both individually and collectively. At the regional level, Bay of Bengal littoral states should take measures to collect plastic litter from waterfronts, promote recycling and encourage use of biodegradable packaging. For instance, in Bangladesh, since 2013, under the Fighting Marine Debris project, divers and volunteers have been engaged in removal of marine debris off the Saint Martin’s Island. In February 2016, the divers removed 1,048 objects. The “Buy Back Program” in the Republic of Korea is another good example. Since 2009, they have collected above 31,000 tons of debris from sea from at least 80 collection sites. We need more initiatives like this from all the stakeholders to save our marine ecosystem.