Duterte, Moro terrorists have blood on their hands 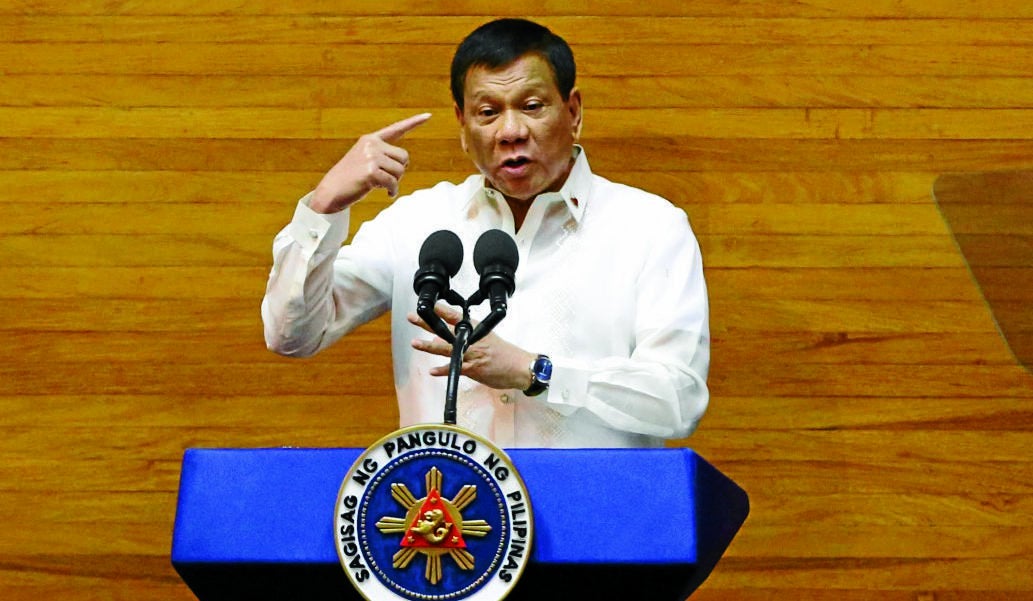 JAKARTA — Philippine President Rodrigo Duterte is most likely the only leader in Southeast Asia who has proudly called himself a murderer and his bloody track record reportedly played a major role in winning the presidential election in June 2016. He boasted that he would eradicate massive corruption and Muslim rebellions in the southern Philippines during his six-year term through violence and other means.

Former Indonesian president Soeharto ordered the killing of thousands of alleged gangsters in the 1980s but he only acknowledged that the instruction came from him several years later in his autobiography. Cambodia witnessed a horrific genocide some decades ago, but the leaders responsible for it refused to make an honest confession like Duterte.

In the 1970s, Khmer Rouge leader Pol Pot was responsible for killing nearly 2 million Cambodians, or about 25 percent of the population, because he and other party leaders, like Khieu Sampan, believed that genocide was the only way to build a new Cambodia.

With his honesty, is Duterte a real gentleman with his blatant claims?

He claimed he had killed, with his own hands, several criminals during his nearly two-decade tenure as the mayor of Davao in the southern Philippines. Since 2016, tens of thousands of alleged drug traffickers have reportedly been killed by security forces and the police. Duterte bullied those who protested these bloody acts, including Pope Francis who is revered in the Catholic-majority nation.

“In Davao, I used to do it personally. Just to show to the guys [police officers] that if I can do it, why can’t you,” AFP quoted him as saying a few months after his election victory. “And I’d go around in Davao with a motorcycle, with a big bike around, and I would just patrol the streets, looking for trouble also.”

The bombing of a Catholic cathedral in Jolo, Sulu province, on Sunday again proves that Duterte’s convictions are totally wrong and that his ruthless approach, including extra-judicial killings, are ineffective in eliminating the five-decade armed rebellion in restive Mindanao.

The terrorist attack killed 20 churchgoers and military personnel, and wounded over 100. The Catholic church has been a target of terrorist attacks in the past, but Sunday’s blast is the deadliest. Abu Sayaff is the main suspect, although the Islamic State (IS) group quickly claimed responsibility.

Sunday’s attack occurred just six days after a referendum granted self-rule to the predominantly Muslim region in Mindanao. The rebels and government hoped that autonomy for the Bangsamoro would end the five-decade armed conflict and keep the independence aspirations of the Muslim minority in check.

I am reminded of a quote from the Bible that suggests Duterte’s pride as a self-proclaimed murderer will not last long. “Put your sword back into its place; for all those who take up the sword shall perish by the sword.”

Duterte dared Muslim rebels and jihadists to counter military operations in Marawi last December. Earlier in May, he ordered a massive military campaign and after five months declared, “I am the government. Do not impose conditions on me. I’m the one who’ll make orders.”

In October, Duterte claimed a military victory in Marawi. But as long as the root cause of the problem is not solved, violence and terror will continue to haunt the country.

For the sake of his nation, which he will lead until 2022, Duterte should not hesitate to learn from Indonesia despite all our shortcomings. Indonesia achieved significant progress in the war against terrorism especially after the terror attacks in Bali on Oct. 12, 2002.

To fight terrorism, the government has used various methods because it has learned that a security approach alone will exacerbate the problems. Indonesia also has had long experience in dealing with rebellious provinces such as Aceh. Papua still has a level of armed rebellion, but the government no longer just depends on a military approach like Soeharto’s regime.

Indonesia played an important role in the truce between Manila and the Moro National Liberation Front under Nur Misuari in 1996. The truce collapsed because, among other reasons, it was much easier for Nur Misuari to fight the central government than to deliver his promises to the people.

Indonesia is not really an ideal example, as resistance continues in Papua despite the government’s generous economic incentives. It is also true that the government has been unable to protect the constitutional rights of minorities. Churches and non-Muslim congregations have often become easy targets for those claiming to be devout Muslims. But Indonesia can still share its many experiences with others.

Does Duterte not want to be remembered by his nation and neighbors as a statesman with bold policies and actions to protect his country, as well as to improve citizens’ prosperity?

So far, it seems he wishes to be remembered as a president who does not hesitate to kill people whom he describes as the enemy of his government. If so, then he is a butcher much like the terrorists in the southern Philippines. Kornelius Purba

LANY, vivo encourages millennials to ignite the night in the ‘new normal’

‘I lost mine too’: Veteran journo Ces Drilon laments ‘one of toughest days I had to face’

‘I lost mine too’: Veteran journo Ces Drilon laments ‘one of toughest days I had to face’

Cayetano: Gabby Lopez could have renounced US citizenship or declined ABS-CBN post