Some Koreans have had enough of ‘beauty’ | Inquirer Opinion

Some Koreans have had enough of ‘beauty’ 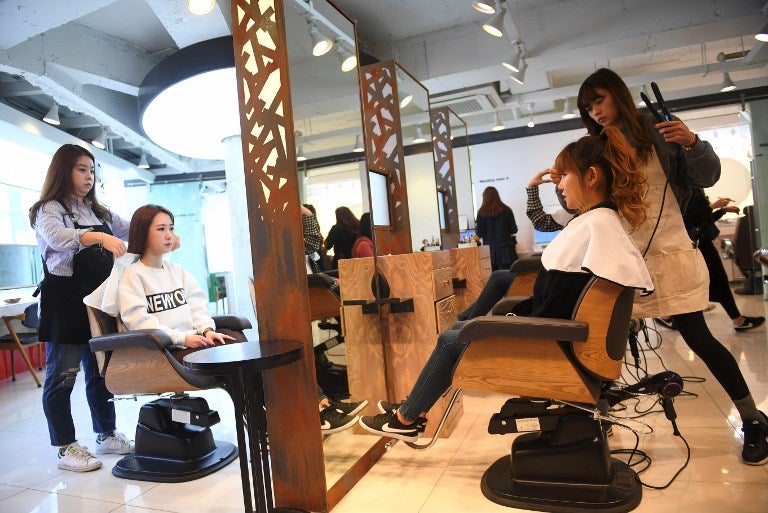 This picture taken on March 16, 2017 shows Jung Hye-Yoon (R) and Lee So-Young (L), members of K-pop group SixBomb, having their hair done at a beauty parlour in Seoul. – All four members of obscure K-pop outfit SixBomb went through extensive plastic surgery, from nose jobs to breast implants, before releasing their new single on March 16. Photo by JUNG Yeon-Je / AFP

BANGKOK — Of all countries, South Korea – whose capital is a magnet for Asian women (and some men) crazy about cosmetics – has given birth to an anti-makeup campaign. And what is so far just a small movement could well catch on. If it does, you might never view cosmetics advertisements the same way ever again. The global trade in beauty products will have to revise its marketing strategy.

The women behind South Korea’s “Escape the Corset” campaign say they’ve wasted enough money tending to their physical appearance. Their collective dismay has seen piles of beauty products destroyed at publicity events – crushed to pieces. It’s nothing less than a rebellion against South Korea’s rigid beauty standards, which the women deem unrealistic – and against its world-famous plastic-surgery industry.

The #MeToo movement helped inspire the uprising, but in a strict patriarchal culture like Korea’s, the campaign is unique and truly remarkable. It has a mountain to climb if it is to succeed, though. South Koreans undergo cosmetic surgery at the world’s highest per capita rate and Seoul is one of the world’s most beauty-obsessed cities. Teenage girls say they wouldn’t have confidence to go to school without makeup. This is, after all, the land of “K-beauty”, and that’s a major export.

Rejecting such notions outright, many of the women in the movement now sport bowl haircuts, which Seoul Broadcasting System reports have drawn derision and even death threats. Bosses have told employees with plainer coiffure that they didn’t “look feminine enough”. Elsewhere, a news anchorwoman was criticized for wearing glasses, despite it being commonplace among her male counterparts.

FEATURED STORIES
OPINION
‘Wait for us; we will be there’
OPINION
Who cares about GNP or GDP?
OPINION
Marcos: ‘History is not through with me yet!’

But the backlash has only helped the movement spread, fuelling simmering anger over glaring disparities in both politics and the economy. South Korea’s wage gap is the highest among member-countries of the Organisation for Economic Cooperation and Development, and women hold just one-sixth of the seats in the National Assembly and one-tenth of corporate management positions, according to SBS. Despite this, feminism has firm roots in the country and the campaign is nurturing it further. Misogyny is blamed in large part for the perceived negative influences of the beauty industry.

The campaigners believe advertising unduly pressures women about their appearance. Cosmetics and facial-care products generated US$13 billion worth of sales in South Korea last year, the buyers coerced into believing that such items are essential daily needs rather than mere accessories. This more than anything is what triggered the current campaign – the widespread marketing tactic of claiming that what’s utterly unnecessary in life is in fact essential. Women are told they absolutely must have makeup as well as other products to apply before and after.

It seems unlikely that the campaign will bring about sweeping change in national sentiment anytime soon, but the change envisioned is certainly desirable. It’s best encapsulated in a video posted online by someone involved in the movement. Racking up 5.5 million views to date, it shows a woman laboriously applying creams, foundation, eyeliner and fake eyelashes – presumably her daily routine – as a series of messages she’s apparently received in the past flash across the screen. One says, “I would kill myself if I were you.” Then she takes off all the makeup and says to the viewer, “Don’t be so concerned with how others perceive you. You’re special and pretty just the way you are.”