Was Singapore meet just a coming-out party for Kim? 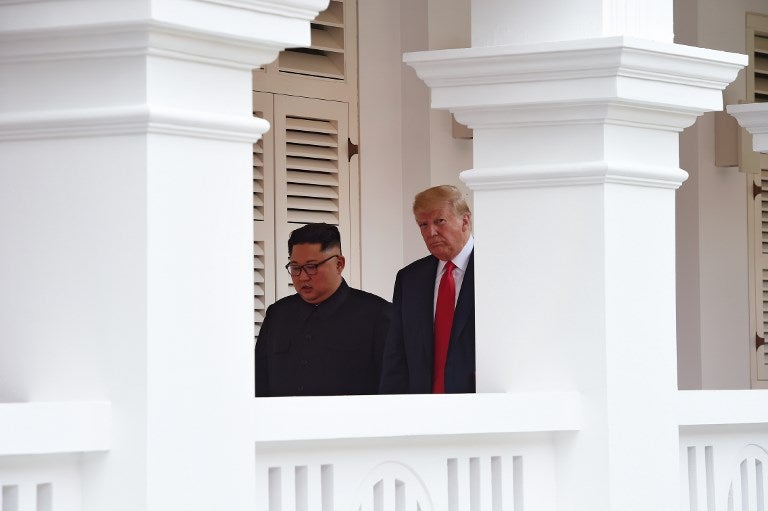 North Korea’s leader Kim Jong Un (L) walks out with US President Donald Trump (R) to face the media after taking part in a signing ceremony at the end of their historic US-North Korea summit, at the Capella Hotel on Sentosa island in Singapore on June 12, 2018. Donald Trump and Kim Jong Un became on June 12 the first sitting US and North Korean leaders to meet, shake hands and negotiate to end a decades-old nuclear stand-off. AFP FILE PHOTO

NEW DELHI  — From all indications this appeared to be the case. In a trice Kim Jong- Un was transformed from a pariah to a confident leader on the world stage. Prior to this he seldom ventured out of his country except for the occasional journeys to China and Russia in armoured trains with practically zero visibility.

Mr. Trump admires strong men as is well-known. Once his advisers strongly advised him that pre-emptive military strikes were an inadvisable proposition the US president changed tack as is his wont, taking everyone by surprise. Wild swings have become his hallmark.

Compared to President Trump, Kim is a veteran in the art of international diplomacy, the Kims having dealt adroitly with a number of US presidents before him.

The North Korean leader achieved his aim in the full glare of international media even before the closed-door summit meeting had commenced. He exhibited masterly self-confidence.

More than the nations of the world he wanted his people back home to see their leader meeting the leader of the most powerful country on equal terms.

Whether the summit meeting that followed has brought North Korea closer to denuclearisation is a question that left all the major players around the world in doubt.

Were any time frame or guarantees demanded by the US President or was it more a meeting to get a measure of each other and thus establish a personal rapport is also open to doubt.

Crystal-gazing is at best a hazardous pastime. Nevertheless, looking into the future can indicate steps that require to be taken to strengthen the pluses from the détente that seems to be in place; at least for the time being.

Some positives that have emerged also give a measure of guarded hope that the worst-case scenario that had kept the world on tenterhook had now been pushed back.

The biggest gain is certainly the improvement of relations between the leaders of the two Koreas. In fact, any movement forward would not have taken place without the initiative taken by the South Korean leader who had made improving relations with North Korea his overriding priority during the election.

On being elected he has taken it forward in a big way. The meeting between the two leaders in the Demilitarized Zone (DMZ) paved the way for the Singapore Summit between the North Korean leader and the US President.

Having basked in the limelight Kim will find it difficult to go back to his past intransigence. By themselves the two Koreas are unlikely to revert to the earlier hostilities.

While Mr. Moon Jae In is not likely to lower his country’s guard the Thad batteries remain in place with enhanced range according to some reports. So do the US forces although exercises close to the border have been called off.

Joint sports teams were fielded for the Winter Olympic Games held in South Korea. These were witnessed by Kim Jong-Un’s trusted emissary, his sister Kim Yo-Jong who charmed her hosts.

She used the visit for exchanges with the South Korean leader. Thereafter exchange of orchestras, family reunions and other confidence-building measures have been put in place.

How far the South Koreans can go towards the ultimate reunification of the Korean peninsula remains nebulous for several reasons. First of all, Moon Jae In is not an independent player like his North Korean counterpart.

The former’s country remains dependent on US guarantees. UN sanctions too limit his freedom. What is more his countrymen themselves are wary looking ahead.

The older generation viscerally distrusts the North Korean leader; the younger generation while more enthusiastic is worried that the South might have to go in for some kind of communism.

The South Korean leader will continue to be the mainstay of forward movement by all sides. His assessment about Kim’s real intentions will prove invaluable for President Trump and US interlocutors who have made a few visits to Pyongyang and met again with their North Korean counterparts in Singapore.

Reunification remains a distant goal to be dealt with after denuclearisation has taken place and the North no longer threatens the South militarily. Even deeply interested neighbours China and Russia would be wary of a united Korea.

Would it be truly independent or would it remain under US influence if not tutelage. It is conceivable that at the Helsinki Summit the Korean question was discussed between the two presidents.

President Trump would have been keen to learn firsthand Russia’s position on denuclearisation and from the country’s in-depth knowledge of North Korea and its leader.

Not many people know that it was Russia that sent in the founding Kim to North Korea to take over the country; prior to that he had served several years in the Russian army.

What happens then to denuclearisation of North Korea? As per this writer the following aspects can be taken to be prevailing in the foreseeable future:

o Denuclearization has definitely been put on the backburner. Initially there were satellite pictures indicating dismantling of a launch site. The latest UN release gives a completely different picture.

o Russia and China had been left out in discussions between the US and North Korean leader. They now will aim to play a bigger role. Kim Jong-Un had met the Chinese leader on several occasions before and after the Singapore meeting. Some assurances might have been given by Mr. Xi Jinping to the North Korean leader.

o Japan and several other countries might like to hold similar meetings with the North Korean leader. These too will reinforce Kim Jong- Un’s position on the world stage adding to his stature and self-confidence.

o Since there is unlikelihood of North Korea denuclearizing and US military action having been pushed back after the Singapore summit what efforts can be made to force or induce the North Korean leader to start denuclearization.

Failing which much harsher measures might have to follow globally. In the former case his minimum demands would most likely include: binding peace treaty with the US; with guarantees lodged in the UN Security Council that US forces would withdraw entirely from the Korean peninsula, if not the region. (The latter would be unlikely unless there were to be a larger settlement between China, Japan, South Korea and the US on the South China Sea).

o China and Russia would give independent guarantees for the safety and security of North Korea once the peace treaty with the US had been signed and ratified in the UN Security Council.

o Denuclearization in given timeframe to be monitored by IAEA inspectors who would remain in situ till completion.

To use a cricketing term Kim Jong-un is now batting with far more confidence. The earlier confidence was more that of bravado. He has been put on the world stage as a leader to be reckoned with.

Not President Trump or anyone else can shrink him back to his earlier reclusive position. Status quo ante is not possible: in nature or for that matter in human affairs.

The writer, Vinod Saighal, is a retired Major-General of the Indian Army. He is author of Third Millennium Equipoise.