Why is youth extremism on the rise? | Inquirer Opinion
Close
menu
search

Why is youth extremism on the rise? 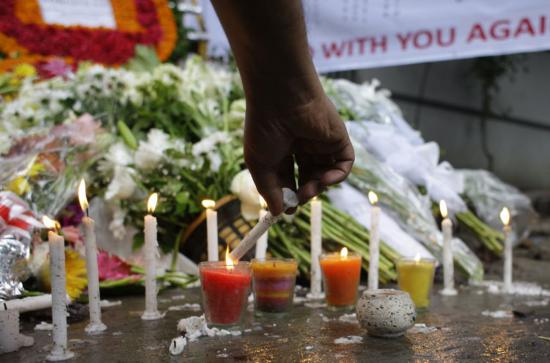 Flowers and candles left in respect of those who were killed during a militant attack on the Holey Artisan Bakery on July 1, 2016, in Dhaka. Source: The Conversation

In a study conducted by three eminent Dhaka University professors, frustration, loneliness, drug addiction, lack of proper vision and guidance, and at times affluence were identified as major drivers of violent extremism among university students. The study—Bangladesh: Facing Challenges of Radicalisation and Violent Extremism—also identified mal-governance, corruption, absence of rule of law, the global politics of labelling and a lack of proper understanding of religion to be among the other major causes that are pushing the youth population of our country towards extremism.

According to the professors, the influence of extremism on young people is quite clear to see in the way they talk, dress and observe various national and cultural days. Which is why, despite the laudable work and effort put into the study by the professors, one must ask, was it really necessary for the study to tell us what should have already by now been so obvious?

Hasn’t it been very plain to see for quite some time that something is clearly broken in our society and nearly all its aspects, and that the overall impact that this is having on our young people is extremely harmful? Because if it wasn’t, then perhaps we were all asleep. And perhaps that is another reason why things have gotten to this point. Because while the youth were struggling to cope with whatever challenges they were facing, it is us who had simply failed to see the signs through their struggles, and it is we who had failed to hear their muted cries for help.

In fact, this could well be the most important reason behind their “frustration,” “loneliness,” and “drug addiction,” witnessing people around them being distracted by a whole host of things, including the blind pursuit of affluence, instead of seeing or hearing them. But then again, placing the entire blame on ourselves may be a little unfair. After all, it is what is most obvious that we, humans, often fail to see.

But now things have reached a point where we have to wake up. That is, unless we want things to go down a path from where there is no return—from losing our youth in things and places that have replaced us. Because that is what these radical ideologies are doing—giving them “a vision” that all human beings must have in order to continue living their lives which are bound to be full of struggles, no matter what “labels” are assigned to them, and “guiding” them down a path of self-destruction in the absence of any proper guides.

Luckily for us, there have been plenty of people who have warned us of the crisis that we find ourselves in today, to whom we can now turn for direction.

One of those people who had only recently come to my attention was John Taylor Gatto, the New York City Teacher of the Year in 1990. In his award acceptance speech, Gatto said, “our society is disintegrating, and in such a society, the only successful people are self-reliant, confident, and individualistic—because the community life which protects the dependent and the weak is dead [emphasis mine].” Which is the case today in our society—plagued by “mal-governance,” “corruption” and “absence of rule of law,” the victims of which are most usually the dependent and the weak.

He said, “The daily misery around us is, I think, in large measure caused by the fact that—as Paul Goodman put it thirty years ago—we force children to grow up absurd…It is absurd and anti-life to move from cell to cell at the sound of a gong for every day of your natural youth in an institution that allows you no privacy and even follows you into the sanctuary of your home demanding that you do its ‘homework.’” Indeed our young people today have no time to spend in nature or with family, and absolutely no “privacy,” or as social media teaches them, no need for it even.

Gatto said, “these things are oddly enough just a more cosmetic way to create dependent human beings, unable to fill their own hours, unable to initiate lines of meaning to give substance and pleasure to their existence. It’s a national disease, this dependency and aimlessness.” Aren’t these the same problems that have firmly taken root in our nation today?

According to Gatto, two central reasons for this cosmetic lifestyle are television and schooling. Television, for the more obvious reasons. And schooling, because it has abandoned what he refers to as the “main engine of education,” that is, the family. Because if we “use schooling to break children away from parents…we’re going to continue to have the horror show we have right now,” because “The curriculum of family is at the heart of any good life.” But as things stand today, children more and more have broken families (literally or figuratively) and a school to make up for that—a wholly inadequate replacement.

In regard to social media, as the study conducted by the DU professors revealed, it “has cocooned the youth into a shell and has become an important tool for radicalisation.” And this should come as no surprise as Facebook founder Sean Parker admitted in early November this year that Facebook (and one can only assume other social media platforms, too) “literally changes your relationship with society, with each other…It’s a social-validation feedback loop…exploiting a vulnerability in human psychology.”

And as further confirmed by one of Facebook’s former executive, Chamath Palihapitiya, it is “ripping apart the social fabric of how society works,” by curating “our lives around this perceived sense of perfection.” Encouraging people to establish “brittle popularity that’s short term,” leaving people “even more vacant and empty,” by “programming” them, even though they “don’t realise it.”

Lastly, as the study revealed, “a lack of proper understanding of religion among the youth” too is one of the major causes of extremism among university students. Which, again, should come as no surprise in our hyper-secularised society that, despite professing (non-stop) its high level of tolerance, is completely intolerant of religions, spirituality or any form of transcendental worldview. And which by pushing religious, spiritual and philosophical discussions aside, leaves the door open for these ideas and thoughts to be monopolised by extremists.

Thus, when people in general lack “proper understanding of religion” and even the secularized ideas they vouch to subscribe to, is it any wonder why the oppressed creatures turn towards extremism in today’s heartless world, with their souls looking for something more meaningful than our social media obsessed culture? Or where opiate use itself has replaced religion and spirituality, which in turn is now being replaced by extremism (and their monopolized definition/version of religion)?