The music over the ruins of Aleppo

ALEPPO, Syria — There are some things that bombs and fighting just can’t kill. Like Mohammed Anis and his determination to live, and to begin anew in the ruins that are today his hometown of Aleppo. Even if his home is quite literally a pile of debris. Even if much of what he had treasured — from his beloved collection of vintage American cars to his trusty pipe — is today destroyed, mangled, broken. Even if the only thing around him that still works is an old gramophone that he cranks by hand.

Anis had been known in rebel-held eastern Aleppo before it fell to government forces at the end of December. Amid the savage fighting and the accompanying shortages, he refused to leave his home and his collection of vintage cars that he showed off whenever he could. The story that my colleague, Karam al-Masri, told of him became one of the more inspiring ones to come out of the besieged eastern part of Syria’s second city. 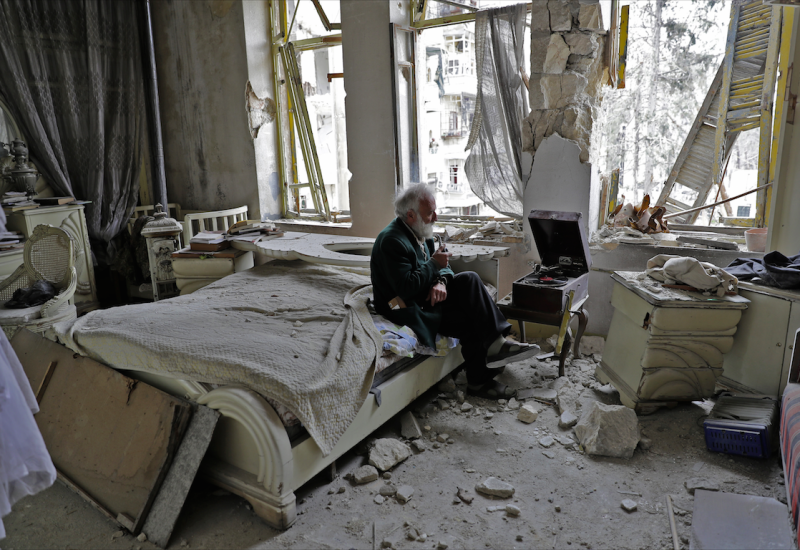 Mohammed Mohiedin Anis, or Abu Omar, 70, smokes his pipe as he sits in his destroyed bedroom listening to music on his vinyl player, gramophone, in Aleppo’s formerly rebel-held al-Shaar neighbourhood. JOSEPH EID / AFP

So when an AFP team headed back into the city recently, we set out to find out what happened to him. He wasn’t difficult to find. The residents remaining in his neighborhood of al-Shaar, directed us readily to the man known around there as the ‘white wolf’ because of his silver mane of hair. We simply asked them if they knew where to find the man who collected old American cars. Karam called him Abu Omar in his report, but we knew that it was a pseudonym, used for security reasons.

Driving first by car and then continuing on foot because of the ruins littering the streets we eventually arrived at a green metal door. We knocked. “You are the French,” he said after opening the door and taking a look at us.

We found out that he only left Aleppo two months before the eastern part fell to government forces. As we spoke, he kept repeating that nothing could destroy his will to live. He was going to restore his “wounded” cars, some destroyed, some damaged. That he would buy new ones. He has an iron will, this man. It’s hard to believe when you see the situation all around him. But who knows. 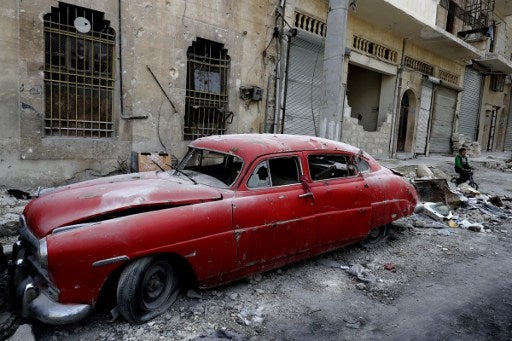 To say that he lives in challenging conditions is a great understatement. He literally lives in ruins.

“How can you live here,” we asked him. “It’s my home,” he answered simply. Like many of Aleppo’s residents, he sleeps in debris.

When we noticed his gramophone, we asked him if it still worked. “Of course!” he said. It was the kind that you see in old movies, the type you need to crank, so it doesn’t require electricity. Which is a good thing, because there is hardly one hour of electricity in the eastern part of Aleppo at the moment, with generators here and there.

“I will play it for you,” he said. “But first, I have to light my pipe. Because I never listen to music without it.”

His pipe was broken too, with a piece of tape holding it together. He lit it, cranked up the gramophone and out came the voice of an Arab singer from the 1940s, the same one that my grandfather used to listen to in Lebanon. For a moment I was no longer a photographer shooting ruined Aleppo. I was a boy in my mountain village, my grandfather sitting on the sofa in the afternoon listening to the “belle epoque” songs of Arab music.

Anis puffed on his pipe. He seemed to be somewhere else as well. He seemed to forget that we were there. He looked out the window and he had a look on his face of a person watching a beautiful sunset. He sat there, puffing on his broken pipe and staring out the window as the music floated over the ruins of his house and the city outside.

As I snapped away with my camera, I knew the scene in front of me was special. It touched me and I had a feeling it would touch a lot of other people, too. Though I didn’t realize just how many.

It summed up so nicely Syria today. Life, hope, people so deeply attached to their homes, their country. After six years of war, the Syrians want life. They just want to let the music play.

Joseph Eid is an AFP photographer based in Beirut. He wrote this article with Pierre Celerier and Yana Dlugy in Paris.

‘I am not my father,’ says daughter of lawmaker who voted to deny ABS-CBN franchise

US rejects nearly all Chinese claims in South China Sea