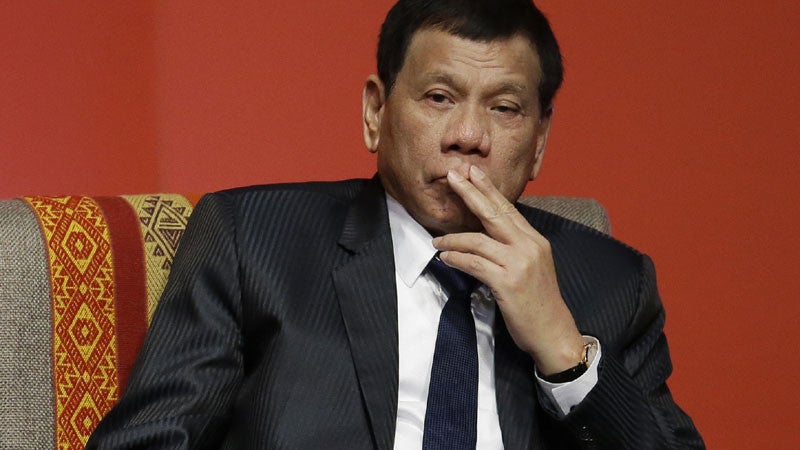 President Duterte said he found his first Asia Pacific Economic Cooperation Leaders’ Summit to be “a productive one” and “very informative.” He was seen studying the briefing papers intently, and indeed he himself said he did a lot of reading at the annual conference, held this year in Lima, the capital of Peru. His choice of the topic which impressed him the most comes as a pleasant surprise to those who heard him say, initially, that he would not honor the Paris Agreement on climate change. Mitigation strategies as a response to global warming, he said, was the issue that struck him the most.

This is good news, because the Philippines remains one of the countries most vulnerable to the undeniable effects of climate change: We experience stronger typhoons, for instance, because the Pacific Ocean, where these storms start, has seen a rise in surface temperatures; a warmer ocean breeds more powerful storms.

The President noted that “Russia, China and Vietnam were the most eager countries to invite [delegations of observers]. They are ready to share new technologies on mitigation.”

Mr. Duterte also held bilateral meetings with the two world leaders he seems to hold in the highest regard: China’s Xi Jinping, whom he described as wearing a wide smile during their talk; and Russia’s Vladimir Putin, who he said invited him to visit Moscow and who repeated his invitation at least three times. “You know we have become fast friends,” he said of the two leaders.

The meeting with Xi cements the understanding on the mutual use of Panatag Shoal reached during President Duterte’s state visit to Beijing; the one with Russia opens the door for the sale of Philippine agricultural produce.

But a summit of leaders like the annual Apec rite is primarily a tightly choreographed exercise in geopolitical theater. Unfortunately for the President, he skipped the traditional gala dinner, where the leaders can do some real networking among themselves, and he skipped the traditional picture-taking session, where the leaders seek to celebrate unity in diversity and also to honor the year’s host. Even though he sent Foreign Secretary Perfecto Yasay to represent him, the effect of his absence was jarring. (Traditionally, leaders skip parts of an Apec conference when there is a natural calamity or a political crisis back home.)

Ex-president Fidel Ramos, who hosted the Apec summit during his presidency and who called a press conference on Monday to express his disappointment, did not sugarcoat his criticism of President Duterte’s absence at the two Apec events.

“As a President, it is his duty to be there at all times even though he does not feel well,” he said in a mix of English and Filipino. “So what if the President is not feeling well? If he has a headache, there’s a doctor accompanying the delegation always. There’s also a doctor in Lima.”

Ramos in particular scored Duterte, whom he had encouraged to run for the presidency, for missing the traditional group photo. “That is not enough to prevent you from having even just a group photo with the leaders. Never mind the dinner, just have the soup, but at the group photo, where is the Philippines? Nowhere. As President you should be in the forefront and look as big as these guys. With 101.5 million people, you’ll just hide in the back?”

There is a reason why leaders continue to take part in elaborate rituals like the Apec conference; they can meet fellow leaders face to face, take their measure, project their country’s presence onto the world stage. It’s a pity that, aside from Xi and Putin, the champions of the President’s projected new world order, there was no one else he seemed to be interested in. Surely the country’s highest interests require a broader view, a more disciplined approach.

ADVERTISEMENT
Read Next
A reminder of the evils of martial law
EDITORS' PICK
SM continues to send relief assistance to remote towns in Batangas
Batangas execs, Taal evacuees thank House; hopeful on rehab efforts
US Navy helicopter crashes in PH sea; 5 crew members rescued
Get exciting deals and discounts when you download the new McDonald’s App
Bato to reapply for US visa if Duterte wants him to join US-Asean summit
‘A greener, cleaner tomorrow’: A how-to guide for Filipinos who want to help with today’s energy crisis
MOST READ
Taal’s sulfur dioxide emission increases
US Navy helicopter crashes in PH sea; 5 crew members rescued
Megan Young, Mikael Daez get married
No time for revelry; Tagaytay instead plans for alert level 5
Don't miss out on the latest news and information.