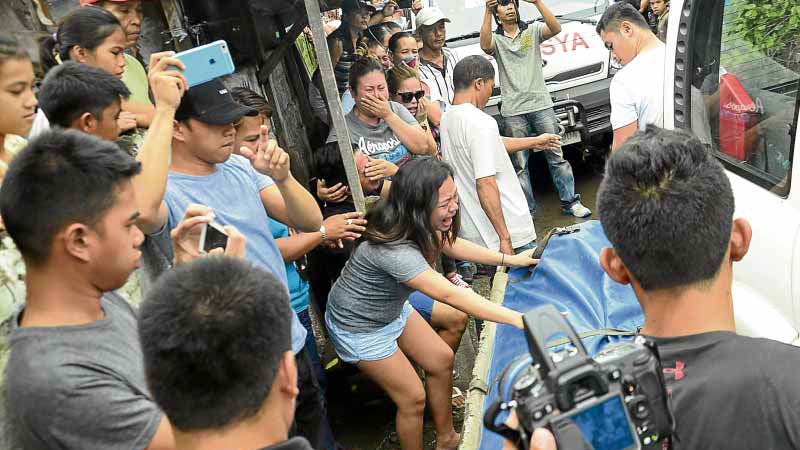 The youngest daughter of slain Mayor Rolando Espinosa, Chesney, wails upon seeing her father’s body as it was being brought out of the Baybay jail where he was killed by members of the Criminal Investigation and Detection Group purportedly during a shootout. —ROBERT DEJON

It used to be that the more dangerous place for crime suspects was the streets, where they were prey to both cops and fellow lowlifes, where they could be shot at any time and die like vermin. Nowadays, it’s a police precinct — that supposed outpost of law and order in the tiniest communities — or a jail.

Certainly, that was the thinking of Chief Insp. Jovie Espenido, police chief of the town of Albuera in Leyte, and his chief suspect, Albuera Mayor Rolando Espinosa, when they worked out an arrangement last August whereby the latter — who had been tagged by no less than President Duterte as a drug lord in the Visayas — would come clean on his activities. In exchange for an affidavit identifying the government and police officials who allegedly provided protection to his fugitive son Kerwin, who was said to have run the largest drug trade in Eastern Visayas, Espinosa was allowed by Espenido to stay in his police station for close to two months. During his stay, his safety was fundamentally assured.

Espinosa, after all, stood as a vital witness, perhaps the government’s strongest one, against the 226 persons he had named in his affidavit. The names included those of 19 politicians, four members of the judiciary, 38 policemen, seven from the Criminal Investigation and Detection Group (CIDG), one from the Philippine Drug Enforcement Agency, three from the Bureau of Jail Management and Penology, one from the Army, and three from the media — a staggering picture of corruption in high places.

Charges were soon filed at the proper offices against 47 of the 226 persons named. It was thus vital to keep Espinosa alive, so the cases could proceed and his drug network  neutralized.

But all those cases are now in jeopardy. On Oct. 5, on grounds of illegal possession of firearms and drugs, Espinosa was transferred to a subprovincial jail in Baybay City. Exactly a month later, he was dead — killed in what the CIDG in Eastern Visayas claimed was a shootout. According to the cops on duty, the CIDG men barged into the prison supposedly to serve a search warrant on Espinosa at the ungodly hour of 4 a.m. The guards were shoved at gunpoint into one corner while the CIDG team went to the separate cells of Espinosa and Raul Yap, another drug suspect. Minutes later, shots were heard.

When the CIDG team left, Espinosa was found shot in the head, chest and stomach; a .38-cal pistol and a packet of “shabu” were allegedly recovered from his cell. The CIDG men spun out the now-standard police tale: The suspect put up a fight, and so had to be put down. It would have been easy to confirm this story but for the cops’ telling act of confiscating the hard drive of the closed circuit television camera; it has yet to resurface.

The jail warden of Leyte, Homobono Bardillon, is having none of the police’s story. Bardillon said Espinosa was heard begging for his life moments before he was killed. The CIDG team, incidentally — or perhaps not — was headed by Supt. Marvin Marcos, whose aunt, Lalaine Jimenea, was among those Espinosa had named in his affidavit. Jimenea has a pending charge at the prosecutor’s office in Leyte based on that affidavit; given the basic conflict of interest, why was Marcos leading a team that has now apparently eliminated a material witness?

That’s what it is from whatever angle one looks at it: Espinosa was the victim of a rubout — right inside a jail, apparently by cops tasked to keep him alive. Human rights lawyer Edre Olalia has described the killing as an “incredibly brazen” act. Sen. Dick Gordon, who had said early on that no extrajudicial killings are happening under the Duterte administration, is now singing a different tune — that Espinosa’s death is “a slap in the face” of the Philippine justice system. However one may call it, this shocking act by state agents cries out for immediate, unsparing scrutiny and investigation.

Read Next
Duterte’s three changes are here
EDITORS' PICK
Leveling up your ‘lutong bahay’ with the kitchen companion you never knew you needed
Notice of 2020 regular meeting of stockholders June 18, 2020
SM prepares for ‘safe malling’
P2.2 trillion in losses: Cost of COVID-19 impact on PH economy
NBI, Immigration to join hunt for ‘underground’ medical clinics
2 Chinese nationals arrested in raid on another unlicensed COVID-19 hospital in Pampanga
MOST READ
NCR is ready for GCQ — Palace
Revillame tells Roque: ABS-CBN is in my heart despite being in rival network
LOOK: Robredo, Vico Sotto, check Community Mart ops in Pasig
Año: Quarantine passes not needed in GCQ, movement restricted to essential travel
Don't miss out on the latest news and information.

Revillame tells Roque: ABS-CBN is in my heart despite being in rival network